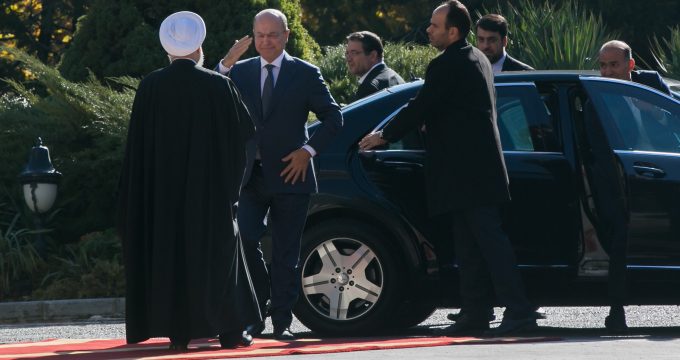 IRNA – Iraqi president was officially welcomed and greeted by his Iranian counterpart Hassan Rouani in Sa’adabad cultural and historical complex on Saturday.

Following the national anthem of the two countries were performed, the presidents reviewed the guard of honor and then introduced the high-ranking delegations to each other.

Bilateral talks between Hassan Rouhani and Barham Salih will begin after the official reception ceremony.

Deepening bilateral, regional and international relations as well as enhancing political, economic, commercial and cultural cooperation are among the Iraqi president’s goals to visit Tehran.

On October second, Salih won the presidential election and was elected as the third president of Iraq after the fall of deposed Iraqi dictator Saddam Hussain.

This is Salih’s fourth regional trip and the first trip to Iran since he assumed office.

He had previously visited Kuwait, the United Arab Emirates and Jordan.

During presidential campaign, Salih specified his position regarding US sanctions on Iran, saying, ‘As an Iraqi presidential candidate and an Iraqi citizen, I say Iranians welcomed us with open arms during the jihad against Saddam. There is no doubt, therefore, that we will sympathize with the Iranians and we do not want them to get hurt.’

‘Sanctions against Iran will have repercussions for Iraq as well. So why not defending our neighbor?’ Sahil added.