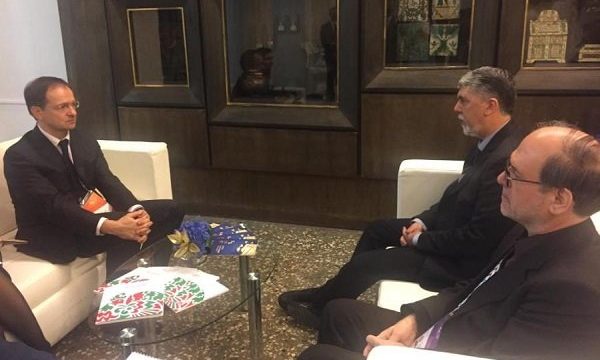 For his part, Iranian Culture Minister Salehi expressed special thanks to the Russian government for holding Iran Cultural Week in Moscow adding, “we hope that Russian Cultural Week will be held in Iran in coming year.”

He pointed to St. Petersburg as a city familiar with Iranian cultural community adding, “undoubtedly, Iran and Russia enjoy high capacities and potentials to broaden their cultural activities.”

Culture Minister of Russian Federation Vladimir Medinsky expressed his special thanks to the Salehi for his participation in 7th Saint Petersburg International Cultural Forum and said, “Russia is ready to expand all-out relationship with the Islamic Republic of Iran.”

Iran’s culture minister is scheduled to meet with a group of Russian Iranologists and professors of Persian language and literature in Saint Petersburg on Friday.