A look at Iranian newspaper front pages on November 15

Iran Front Page – IFP has taken a look at the front pages of Iranian newspapers on Thursday, November 15, 2018, and picked headlines from 12 of them. IFP has simply translated the headlines and does not vouch for their accuracy.

Almost all papers highlighted the execution of Vahid Mazloomin, also known as the Sultan of Coin, and his accomplice, over their role in disruption of gold coin and forex markets.

Also a top story was the ceasefire in Gaza Strip between Palestinian resistance group Hamas and the Israeli regime, and the subsequent resignation of Israeli minister of military forces Avigdor Lieberman, which may cost dearly for Prime Minister Benjamin Netanyahu.

Remarks made by the Leader of Iran’s Islamic Revolution Ayatollah Seyyed Ali Khamenei in a meeting with a group of Iranian Paralympics athletes also received great coverage. 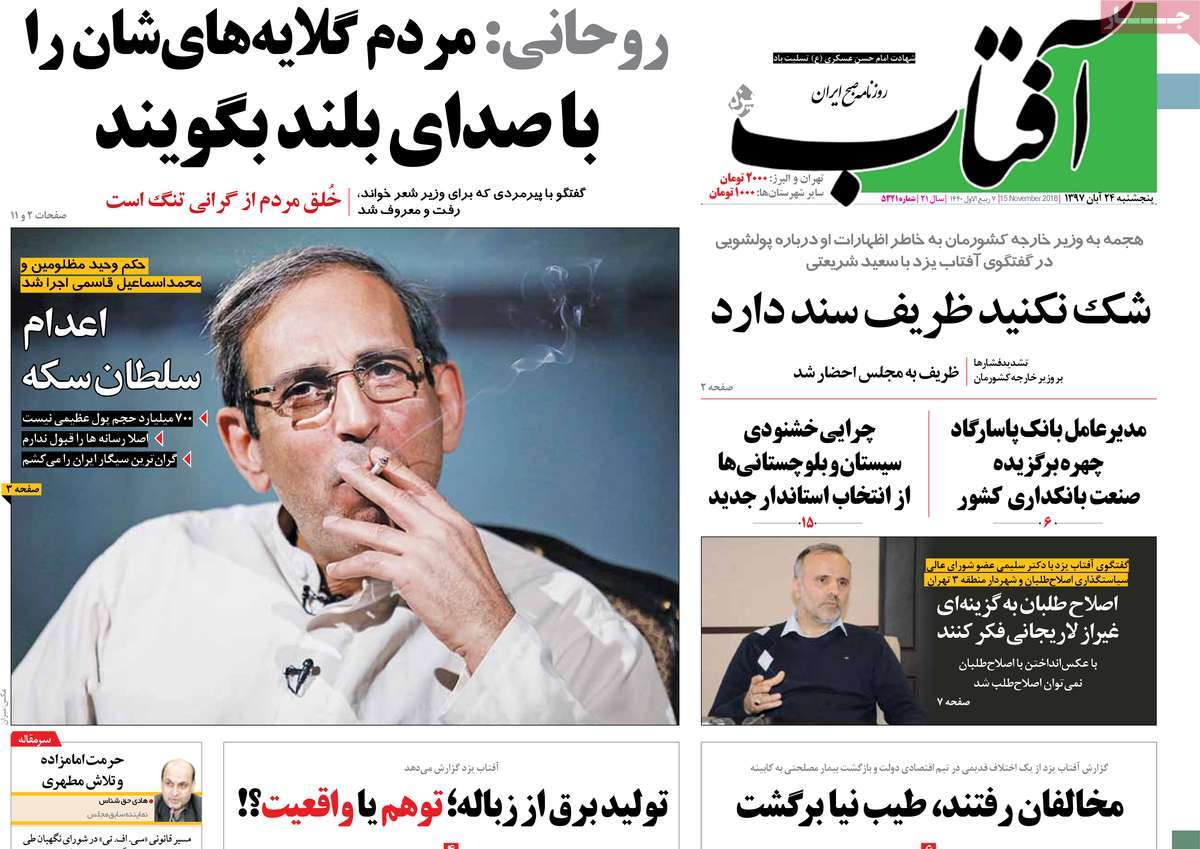 1- Zarif to Elaborate on His Money Laundering Comments in Parliament 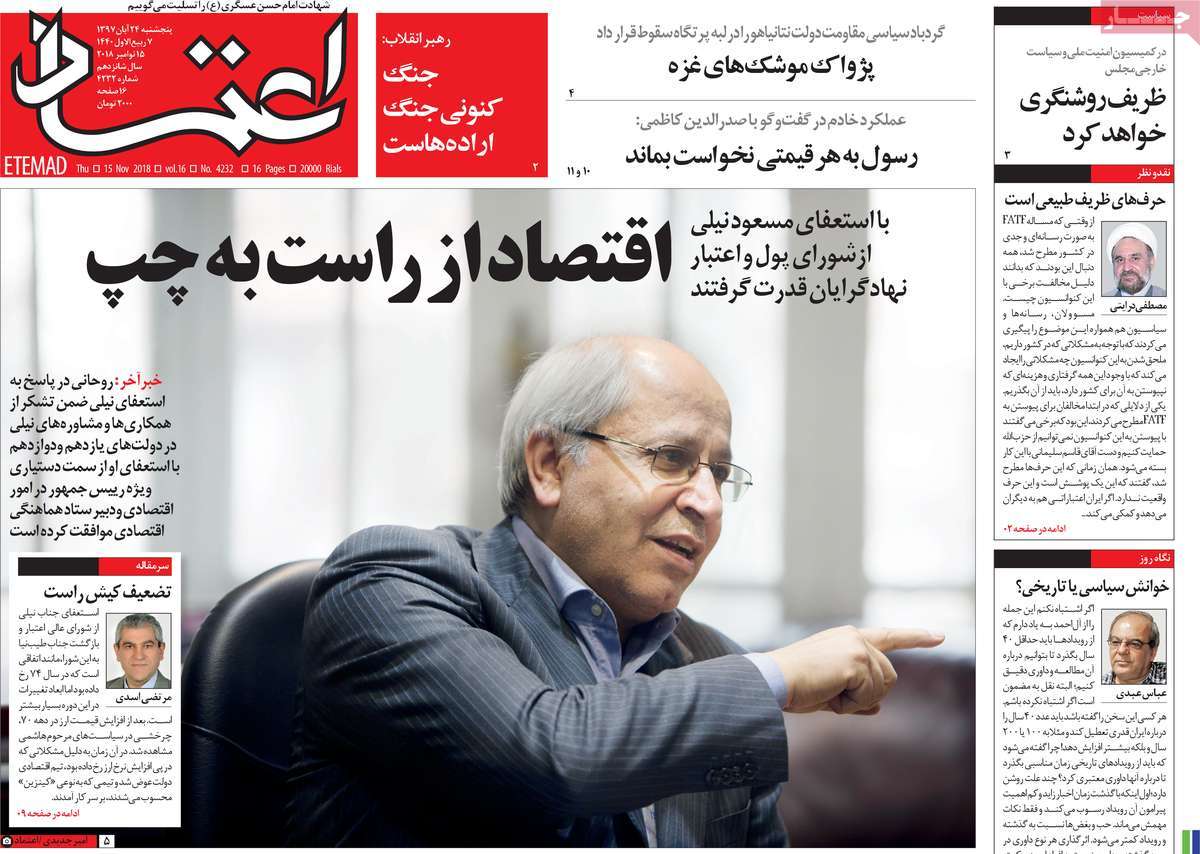 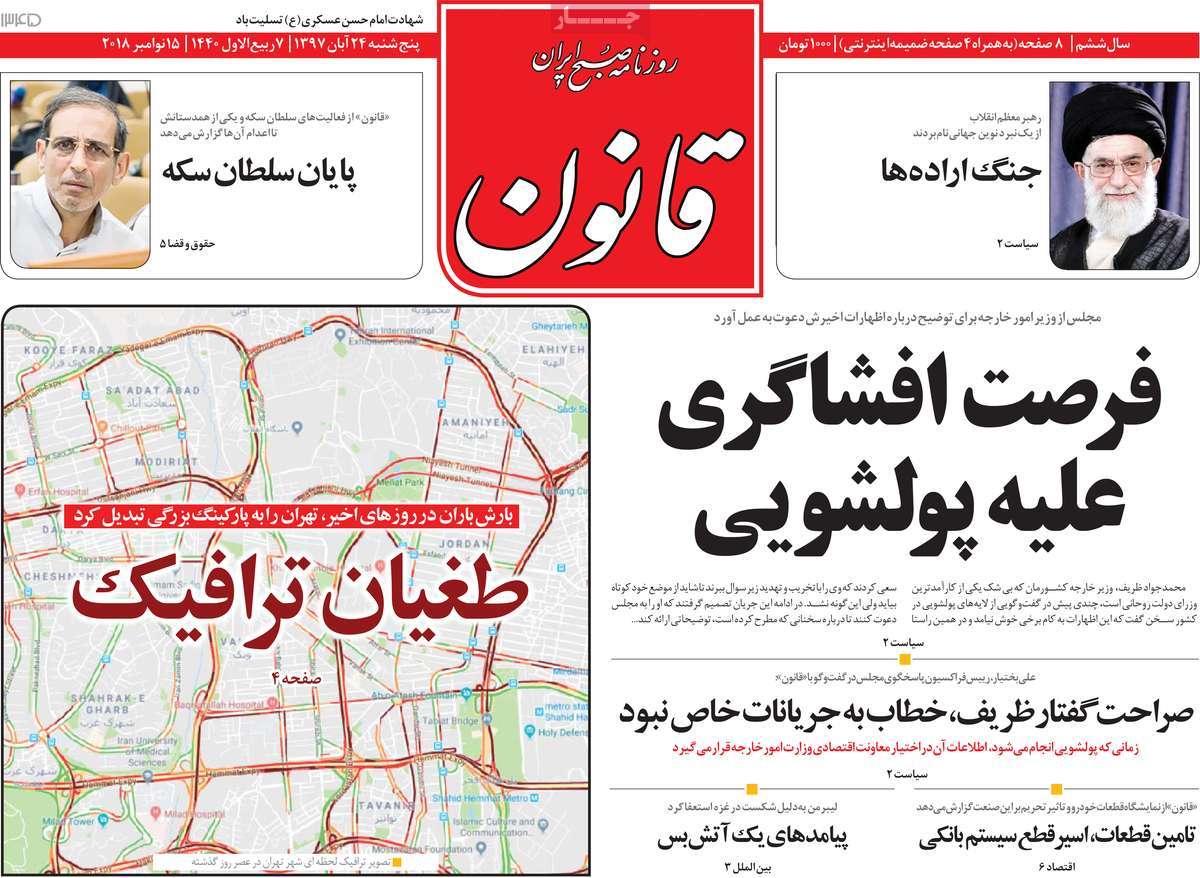 3- Gender Shouldn’t Be Obstacle to Hiring Most Competent Personnel: Rouhani 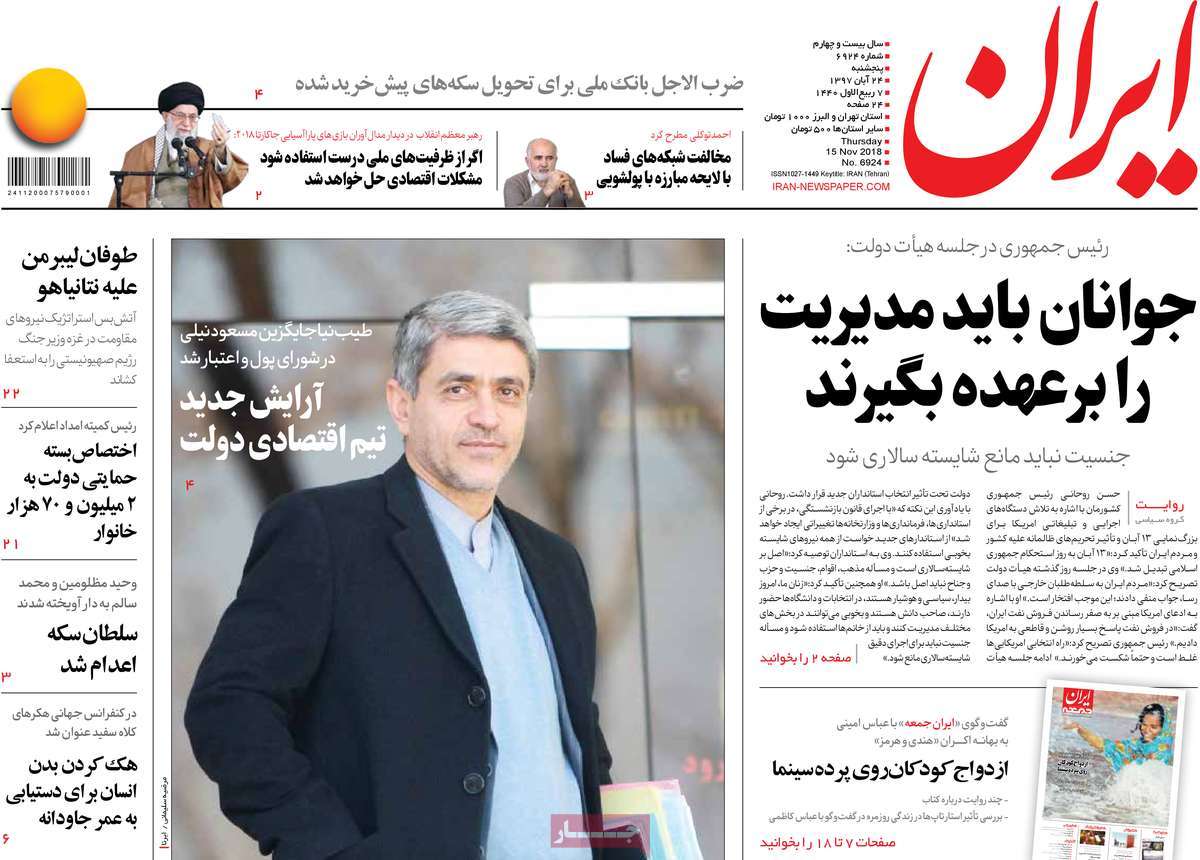 2- Celebration of Victory in Gaza 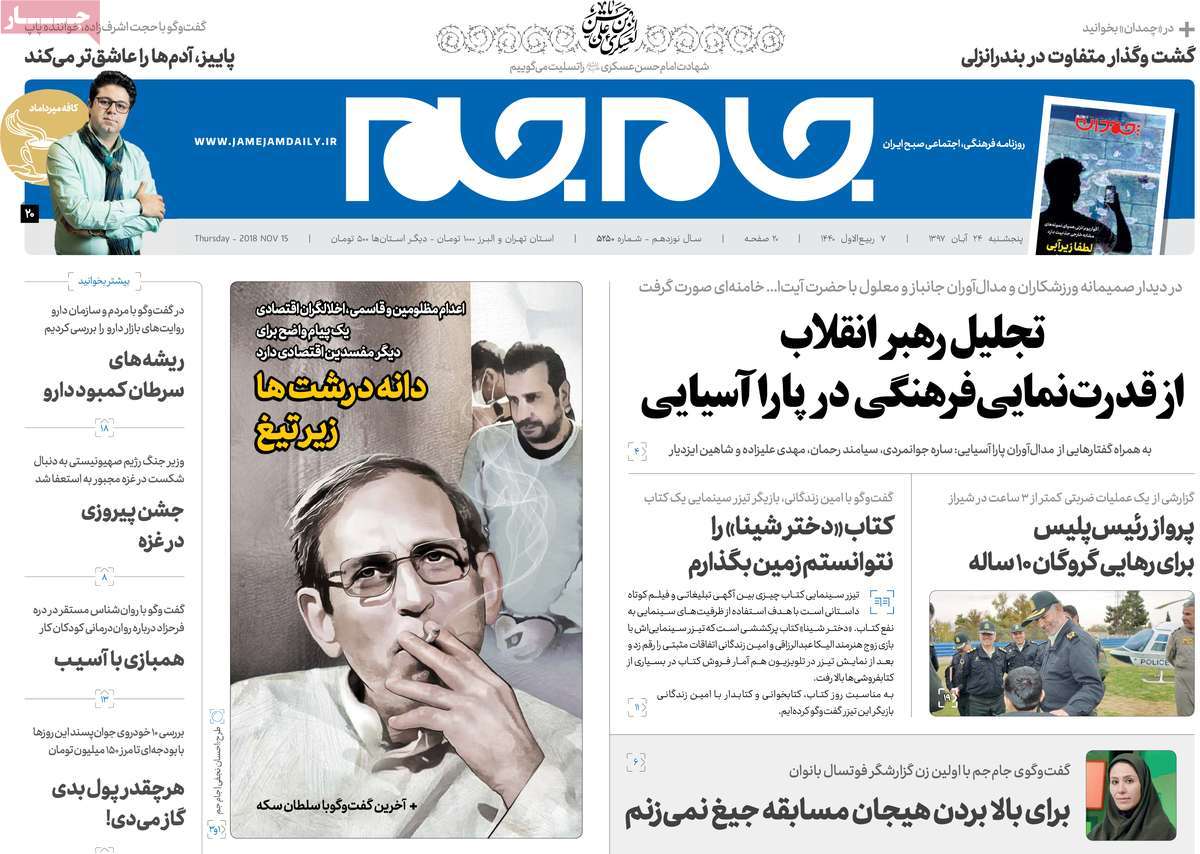 2- We Must Stand against US Plots Today: Rouhani 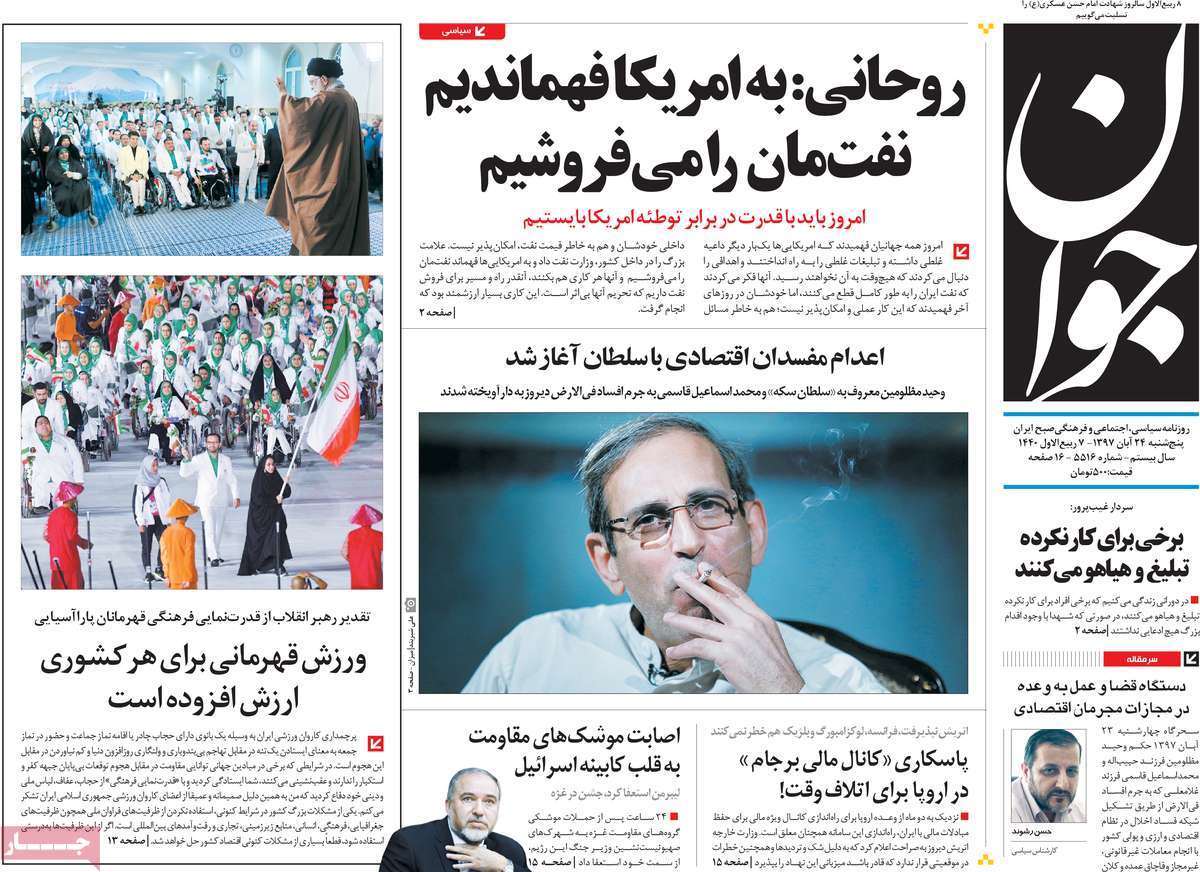 2- Judiciary Executes Sultan of Coin, His Accomplice in Praiseworthy Move

4- We Made Americans Understand We’ll Sell Our Oil: Rouhani 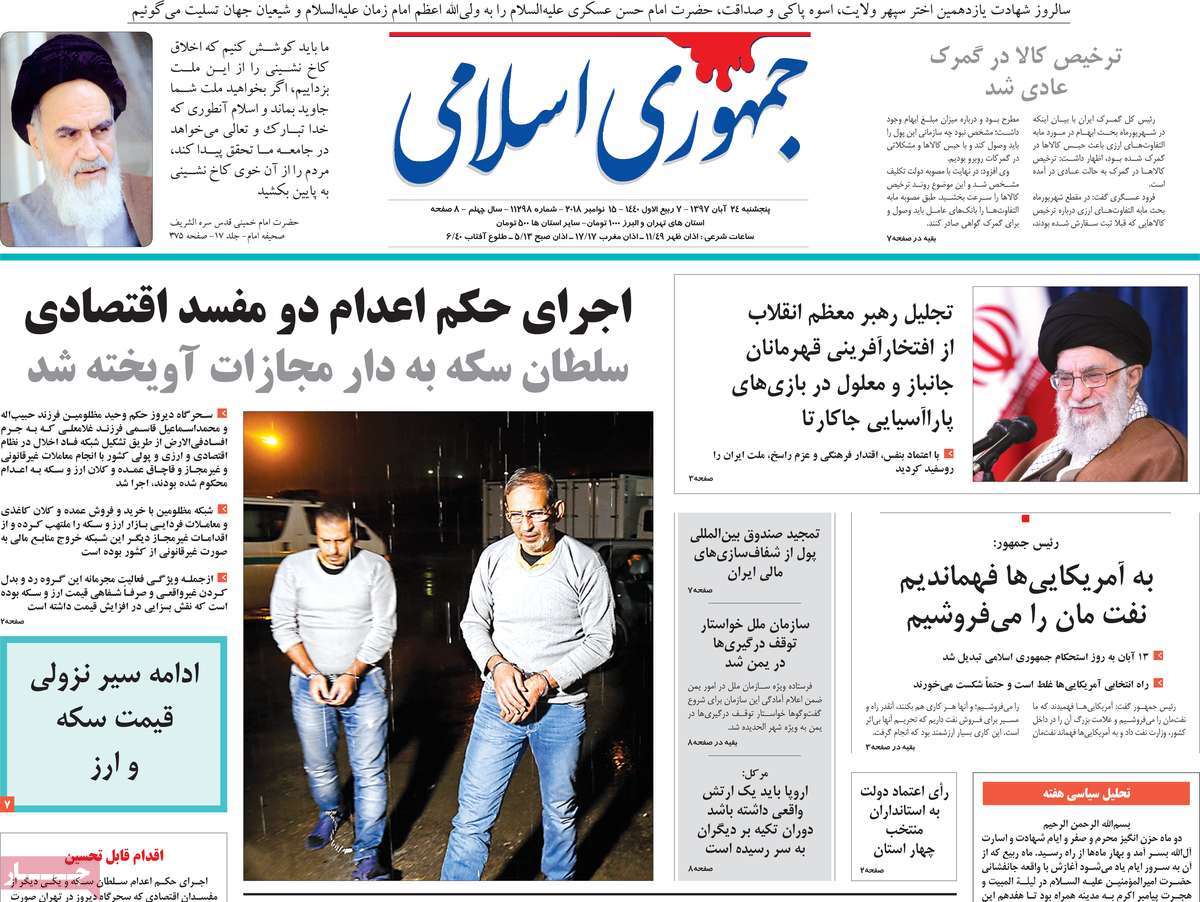 * Now It’s Turn of Executives Who Prepared Grounds for Corruption 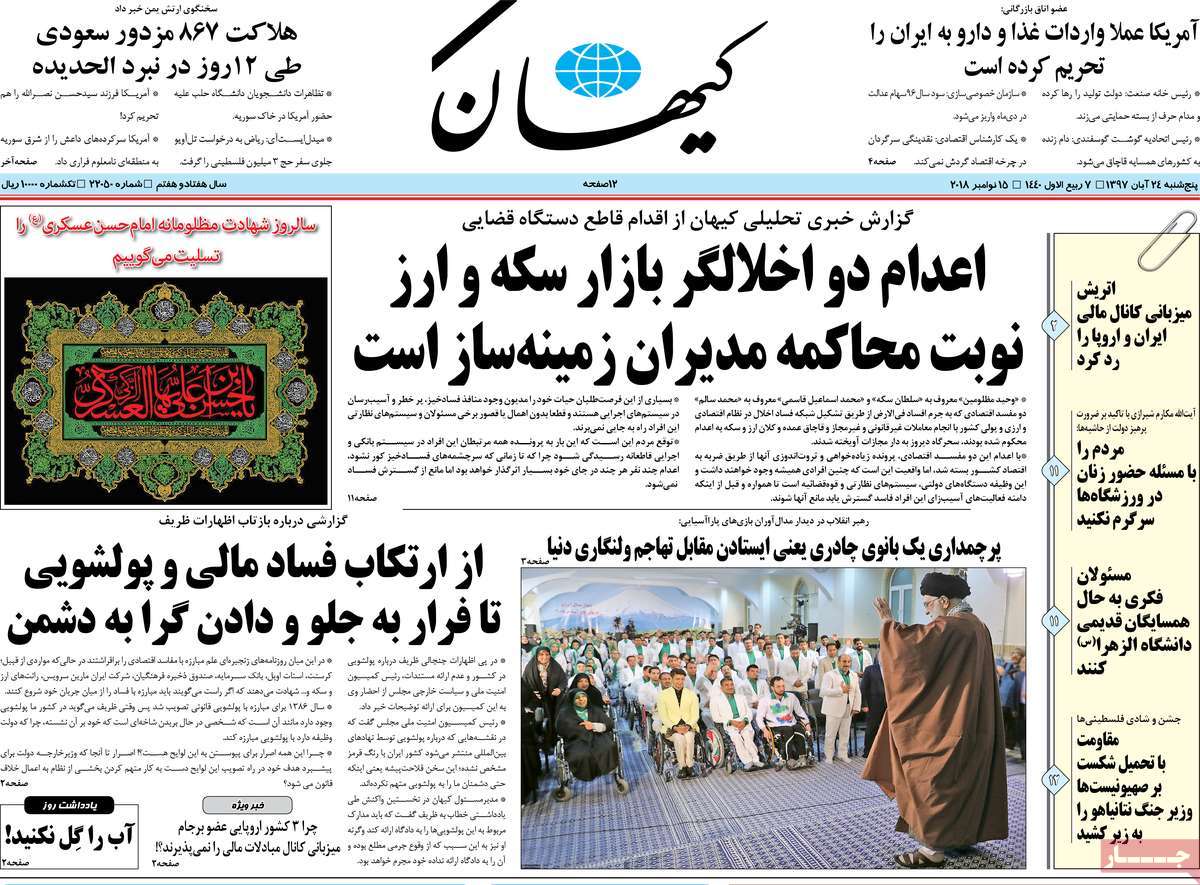 1- Sultan of Coin Executed after 2 Months of Legal Procedures 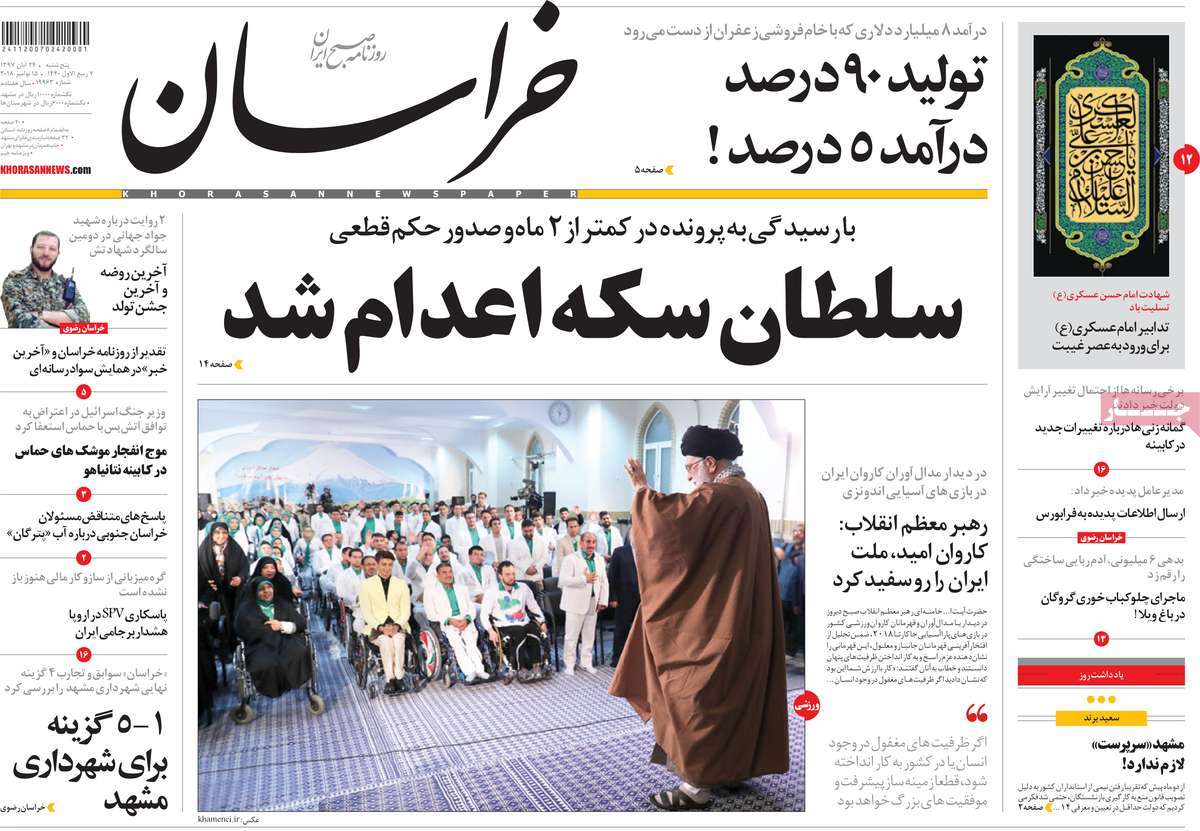 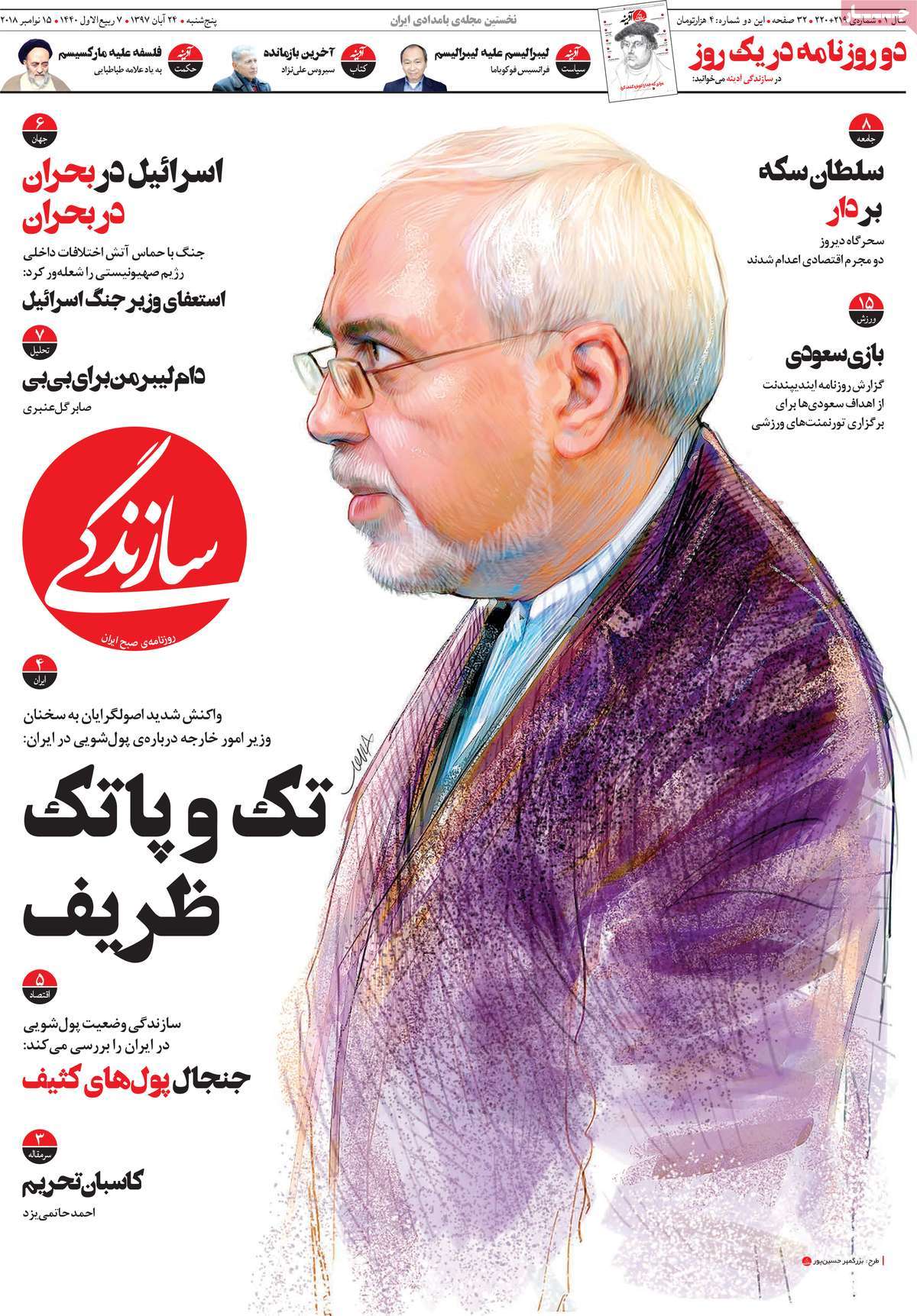 2- Economic Woes Can Be Resolved through Correct Use of National Resources: Leader

3- More Hawkish Minister Out of the Israeli Cabinet of Hawks

4- US Preconditions for Talks with Iran Impossible to Meet: Iranian Envoy 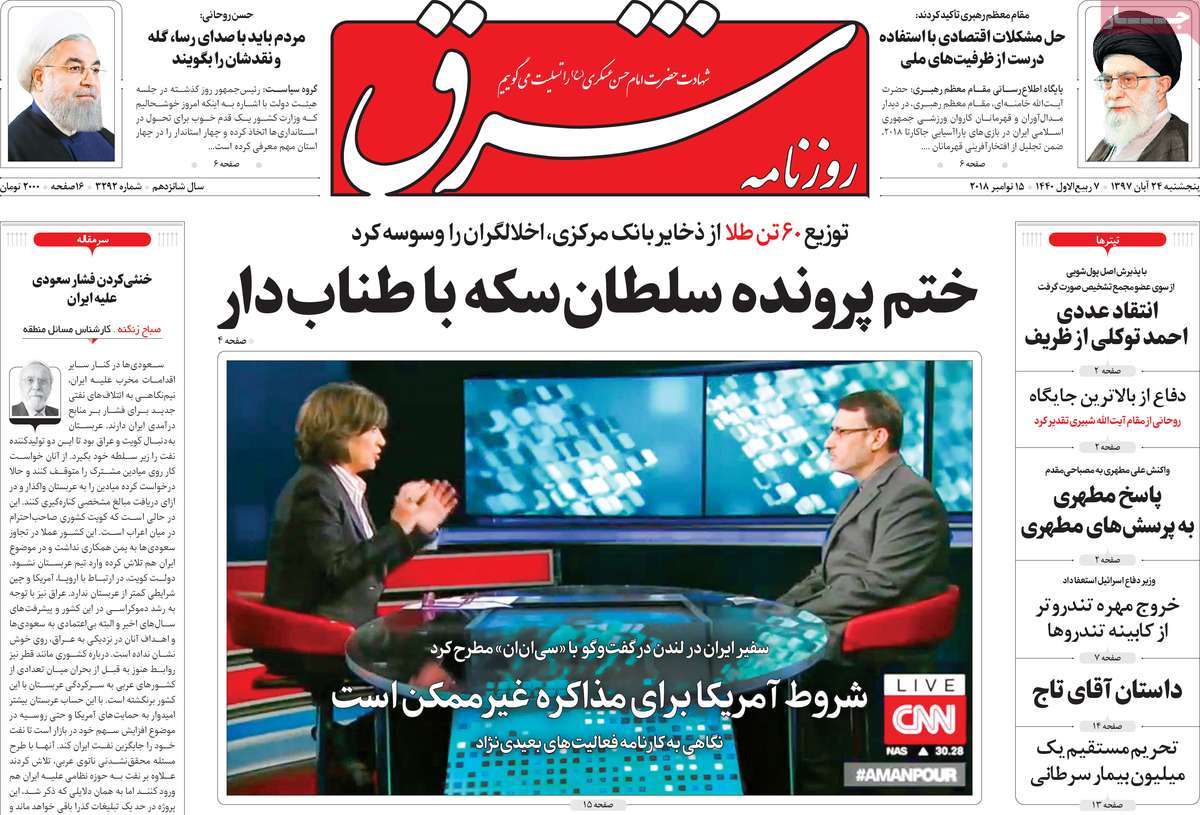 1- California on Fire: 50 Killed, Dozens Missing in Deadliest Wildfire in US History 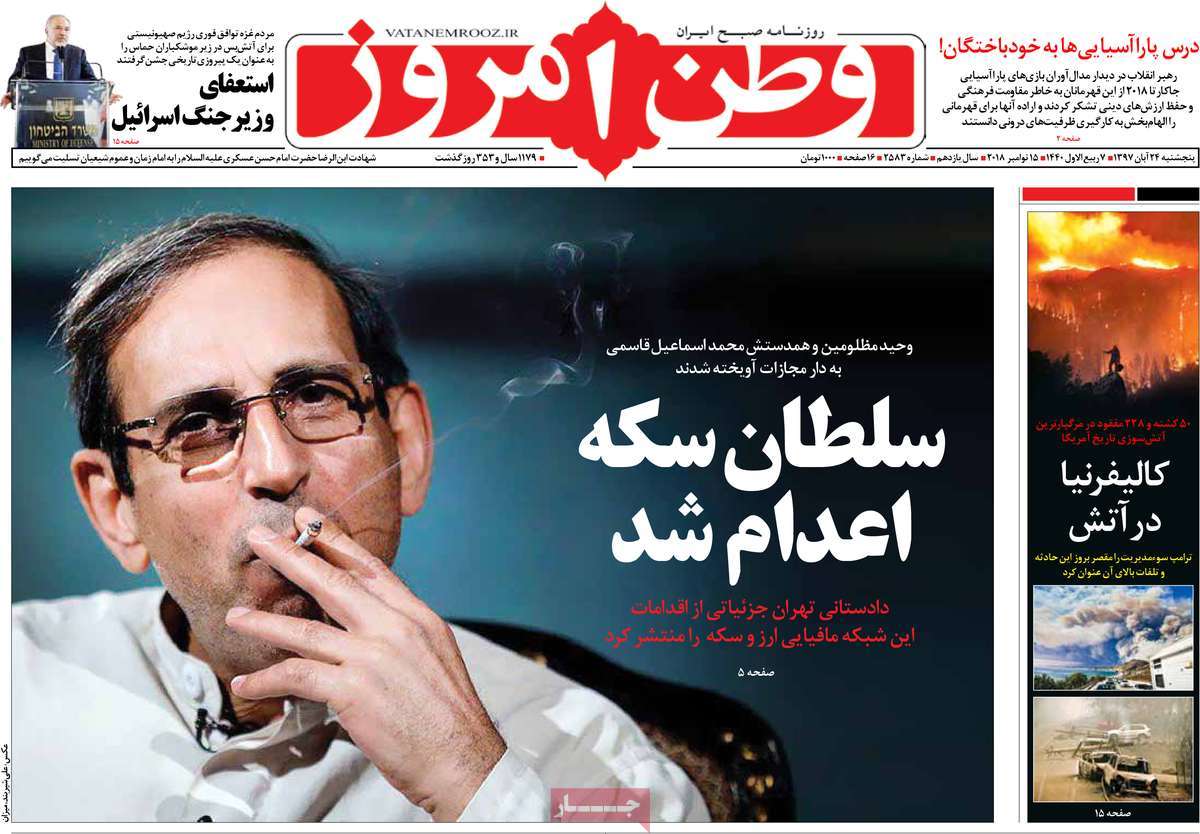