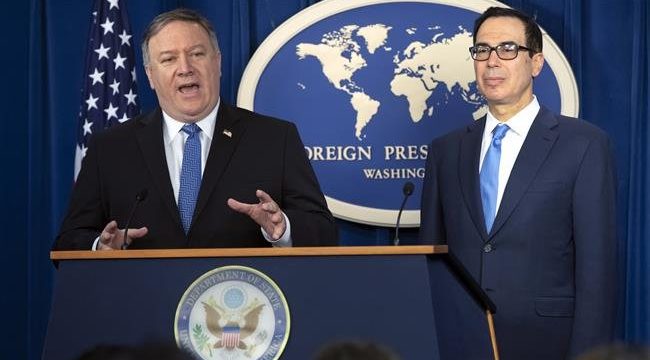 US directs Iran to act like a ‘normal’ country. What is a normal country?

RT | Danielle Ryan: After reimposing crippling sanctions on Iran this week, US Secretary of State Mike Pompeo threatened that Iran should “act like a normal country, or see its economy crumble.” But, how exactly does a ‘normal’ country act?

If the US is indeed a ‘normal’ country, there is a lot we can glean from that, including that a militaristic and bullying foreign policy, which regularly features bombings, invasions and the sponsorship of regime change operations around the world, is normal behavior. If this is normal, is Mike Pompeo suggesting that Iran should start invading its neighbors and engineering foreign coups?

The ideology of ‘American exceptionalism’, the belief that the US is inherently good and unique among nations, is so pervasive in American society and media, that any politician who does not strictly adhere to it will find themselves labeled as un-American or unpatriotic.

American exceptionalism also makes it ‘normal’, celebrated even,  for the US government to spend more than $650 billion on the military every year – more than the next seven countries combined. Pompeo himself is a strict adherent to this ideology, recently discussing the “essential rightness” of the US in global affairs. But hey, one man’s normal is another man’s imperialist militarism.

The US regularly issues travel advisories to citizens traveling to other countries, warning them about crime rates, instances of political violence etc., but what ratings the US get if other countries were dishing them out as frequently?

There have been over 300 mass shootings in the US in 2018 alone. That’s nearly one mass shooting every day so far this year (we’re on day 311). These shootings have become so ‘normal’ that there’s a website which does nothing but trackthem as they happen.

There were 11,000 gun-related deaths in 2016 and statistics show that Americans are twice as likely to die from gun violence than they are to die while riding inside a car, truck, or van, according to the National Center for Health Statistics.

Police in the US shot dead 987 people last year. By contrast, German police shot dead 14 people in the same year. Germany’s population is four times smaller, but if it matched that of the US, only 56 people would have been killed at this rate. In the US, statistics also show that black men are shot at disproportionately high rates compared to the rest of the population.

In fact, black men (armed and unarmed) made up 22 percent of the total number of people killed by police in 2017 – but they make up just six percent of the population. Harrowing videos have shown police shoot unarmed black men in the back as they attempted to run away or choking them to death for selling untaxed cigarettes. Yet, rarely do police face trial for these shootings – and fewer still are convicted. Maybe that’s what Pompeo means by ‘normal’?

Americans spent roughly $3.4 trillion on health care in 2017, which would work out at about $10,350 per person if you divided it equally. That number is twice what any other developed country spends – and yet, the system is so inefficient and broken that there are still about 30 million Americans without health insurance.

Some of them are forced to choose between buying food or buying medication because the costs of prescription drugs are so high. It’s estimated that 45,000 Americans die every year simply because they can’t afford health cover. Is that how things work in a ‘normal’ country? It is also the only developed country that does not provide maternity leave.

Receiving a good college education in the US can be an expensive affair.

So expensive in fact, that students often end up saddled with debt for decades. Americans currently owe $1.5 trillion in student loan debt.

Meanwhile, public education is so underfunded in the US that some schools are falling apart. One study found that 94 percent of US public school teachers use their own paychecks to buy essential supplies for their classrooms due to underfunding. In April, Oklahoma teachers went on a nine-day strike complaining that their low wages won’t allow them to make ends meet. During the walkout, pictures of falling-apart textbooks were posted online, prompting one student to admit she “didn’t realize that people had textbooks with covers on them.”

Anything can become normal when you get used to it.