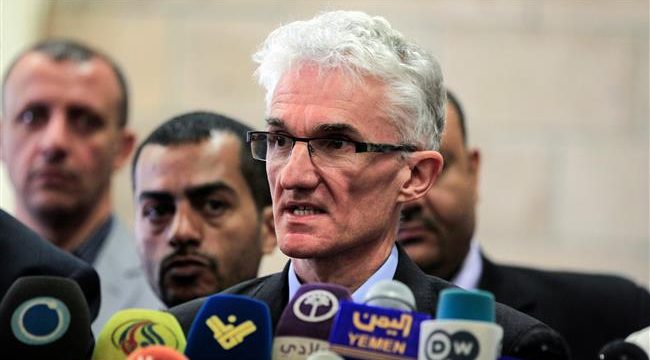 “I ask that the parties implement a cessation of hostilities, not least in and around all the infrastructure and facilities on which the aid operation and commercial importers rely,” Lowcock said in a statement on Tuesday.

He added that the United Nations was ready to play a role in “ensuring the appropriate use of key facilities, especially around Hudaydah.”

‘UAE responsible for escalation of conflict in Yemen’s Hudaydah’

Meanwhile, the spokesman for Yemeni Armed Forces has held the United Arab Emirates (UAE) fully responsible for the recent intensification of conflict around Hudaydah.

Speaking at a press conference in the capital city of Sana’a on Tuesday, Brigadier General Yahya Saree stated that Yemeni army troops, supported by allied fighters from Popular Committees, maintain control over the strategic city.

He added that the Abu Dhabi regime is seeking to establish control over Hudaydah after it managed to occupy the southern Yemeni port cities of Mukha, Mukalla and Aden.

Saree further noted that the UAE bears full responsibility for the conflict, which has escalated significantly around Hudaydah city and possible consequences.

The senior Yemeni official went on to say that Yemeni army soldiers and their allies enjoy subtle tactics and great capabilities to deal with invaders, pointing out that special units have been trained for street battles.

Saree said Yemeni soldiers and Popular Committees fighters have carried out over 35 counterattacks against Saudi-sponsored Yemeni and foreign mercenaries ever since Saudi-led coalition began a new onslaught on Hudaydah earlier this month.

He said at least 1,224 mercenaries, including 20 battalion commanders and 33 Sudanese soldiers, have been killed and injured in the process.

Saree stated that 183 armored vehicles in addition to five weapon depots have also been destroyed in Hudaydah city, emphasizing that Yemeni army soldiers and their allies have successfully managed to cut off enemy supply lines.

The Office of the United Nations High Commissioner for Refugees (UNHCR) has expressed deep concern about the recent wave of violence in Hudaydah and its impact on the civilian population as well as on humanitarian aid operations.

The world body appealed to parties to the conflict to protect civilians and humanitarian personnel; and to secure humanitarian relief items stored in the strategically important Yemeni city.

Saudi Arabia and a number of its regional allies launched a devastating military campaign against Yemen in March 2015, with the aim of bringing the government of Hadi back to power and crushing the country’s Houthi Ansarullah movement.

According to a new report by the Armed Conflict Location and Event Data Project (ACLED), a nonprofit conflict-research organization, the Saudi-led war has so far claimed the lives of around 56,000 Yemenis.

The Saudi-led war has also taken a heavy toll on the country’s infrastructure, destroying hospitals, schools, and factories. The UN has already said that a record 22.2 million Yemenis are in dire need of food, including 8.4 million threatened by severe hunger. According to the world body, Yemen is suffering from the most severe famine in more than 100 years.