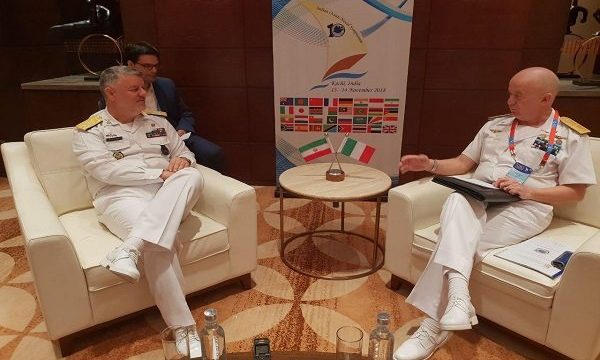 Iran navy to send fleet to Italy in near future: Cmdr. Khanzadi

MNA – Iran’s Navy Commander Rear Admiral Hossein Khanzadi said Wed. a naval fleet will be dispatched to Italy in the near future.

He made the remarks in a meeting with the second-in-command of the Italian navy on the sidelines of 10th anniversary of IONS establishment in Kochi, a major port city on the south-west coast of India.

During the meeting, Rear Admiral Hossein Khanzadi noted the dispatch of an Italian naval fleet to Iran’s First Naval Zone in Bandar Abbas, adding that an Iranian naval fleet will soon be dispatched to Italy for maing visits and interactions.

He stressed that the naval forces of Iran and Italy should cooperate in all marine-related areas, such as exchanging university students and armed forces officers.

The Italian navy commander, for his part, said Italy’s naval forces are fully ready to host the Iranian naval fleet.

He further highlighted that his country is always making efforts to have cooperation and interaction with the naval fleets of other countries, adding that cooperation with Iranian navy, as a powerful marine force, is of special signifiance to Italy.