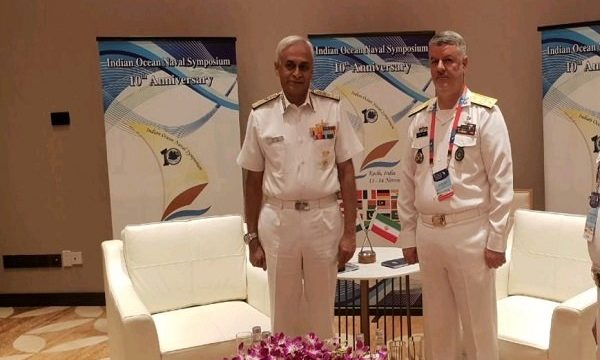 Rear Admiral Hossein Khanzadi held talks with Indian Chief of the Naval Staff Admiral Sunil Lanba on Monday in Kochi, a major port city on the south-west coast of India.

The Iranian navy commander was in India to take part at the 10th anniversary of Indian Ocean Naval Symposium (IONS) establishment.

During the meeting, Khanzadi deemed the current level of interactions between Iranian and Indian naval forces “insufficient”, and voiced readiness on part of the Iranian government and navy for further expansion of relations in various educational and technical fields, as well as information exchange in maritime sectors.

Khanzadi’s call for development of ties and cooperation between the naval forces of the two countries was warmly welcomed by the Indian side.

The two also called for drawing up plans for annual meetings between the naval commanders of the two countries.