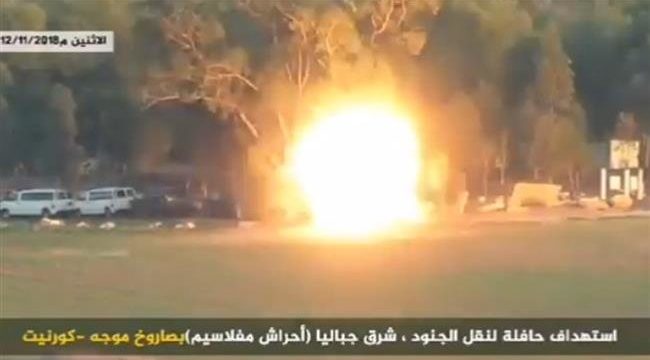 Press TV – The Palestinian Hamas resistance movement has released a video of a guided-missile strike it has carried out against a bus carrying Israeli forces in retaliation for the regime’s earlier incursion into the Gaza Strip.

The footage released on Tuesday shows the vehicle being hit by the missile and erupting into flames as it is moving in the city of Jabalia, north of Gaza City, Gaza Strip.

The group’s military wing, Ezzedine al-Qassam Brigades, said it had used a Kornet man-portable anti-tank missile to target the military bus, adding that all its occupants had died during the retaliatory attack.

The Qassam Brigades said in the statement that the counter-raid was in response to a Sunday Israeli attack that killed seven of its members. Reuters, however, cited the Israeli military as saying that only one “Israeli soldier was wounded in the incident.”

Israeli media had earlier claimed that the bus was carrying Israeli settlers.