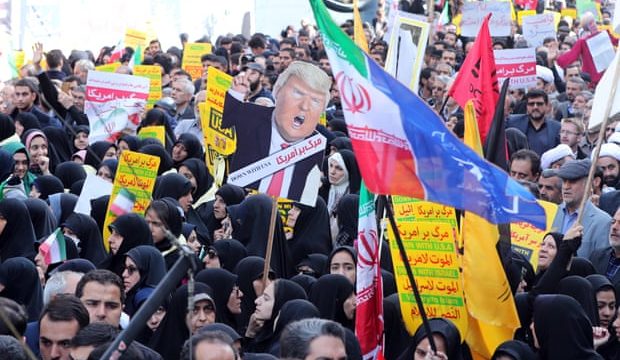 Iran will sell its oil and break sanctions reimposed by the United States on its vital energy and banking sectors, Iranian President Hassan Rouhani told economists at a meeting broadcast live on state television on Monday.

Unnamed military sources, quoted by The Washington Post, have expressed alarm over Iran’s unpredictable reaction to US economic and diplomatic pressure.

Iran says it has successfully thwarted a wave of cyber attacks apparently staged by Israel to target the country’s communications infrastructure, saying it will certainly follow up on the “hostile” scheme via international mechanisms.

Parl. approves Iran’s membership to APLAC
Iranian lawmakers on Monday approved the country’s membership to the Asia Pacific Laboratory Accreditation Cooperation (APLAC), which was proposed by President Rouhani last May.

Iranian Foreign Minister Mohammad Javad Zarif announced that Iran is ready to help and facilitate the peace process in Afghanistan, and said that terrorism and the ISIL are currently the main dangers posed to Afghanistan.

Iran has decisively rejected Denmark’s claims that an Iranian intelligence service had tried to carry out an assassination plot on the Danish soil, saying the Israeli spy agency, Mossad, was behind such allegations.

Senior Iranian and Russian foreign ministry officials discussed the latest developments in the war-torn countries of Yemen and Syria.

US announces reimposition of ‘toughest’ oil, economic sanctions on Iran

The United States has announced reimposition of the “toughest” sanctions ever against Iran in an attempt to curtail the Islamic Republic’s oil exports and put extra pressure on the country’s economy.

The International Atomic Energy Agency (IAEA), the UN nuclear watchdog, confirms that Tehran is meeting its commitments under the Joint Comprehensive Plan of Action (JCPOA) on its nuclear program, Russian Permanent Representative to the Vienna-based international organizations Mikhail Ulyanov told TASS on Tuesday.

An air defense military exercise, underway in large parts of Iran, was brought to a climax on its second day when a homegrown missile defense system and a new 3-D radar were unveiled and became operational.

Denmark says it has arrested three people for praising those behind a September terror attack in the southwestern Iranian city of Ahvaz that killed at least 25, including a four-year-old boy.

The political head of the Ideological-Political Bureau at the office of the Commander-in-Chief of Iran’s Armed Forces said Thu. that the recent remarks by the US Secretary of State Mike Pompeo against Major General Ghasem Soleimani will bring nothing but shame to the US government in the eyes of the oppressed people.

Saudi dissident journalist Jamal Khashoggi, who was killed on October 2 in the Saudi consulate in Istanbul, might have lost his life for disclosing Riyadh’s funding of an anti-Iran UK-based TV channel, the British daily Guardian suggests.

The Supreme Leader of the Islamic Revolution, Seyyed Ali Khamenei, has verbally condoled the people of Lorestan Province and the bereaved family of Iranian police officer Noor-Khoda Mousavi-Mofrad, who succumbed to his injuries received in campaign against the terrorist group of Abdolmalek Rigi in the Lar region of Sistan and Baluchestan Province in 2008.

World condemnation of US sanctions, pragmatic support to multilateralism

Iran’s UN ambassador Khoshroo called on world community to strongly condemn and reject the US sanctions, saying the action is pragmatic support to international law and multilateralism.

Israeli Intelligence and Transport Minister Yisrael Katz has called for stronger relations with the Persian Gulf Arab states in civilian sectors such as aviation security, transportation, commercial aviation and tourism.

The Taliban refused to enter negotiations with the Kabul government at a Friday conference in Moscow aimed at ending conflicts in Afghanistan.

Iran’s former ambassador to Damascus highlighted the complicated situation in Syria’s rebel-held province of Idlib and said it is unlikely that the Turkish government would be able to force the terrorist groups in the area to withdraw.

Hezbollah to retaliate against Israeli aggression on Lebanon: Nasrallah

The secretary general of Lebanon’s Hezbollah resistance movement says his fellow fighters will not hesitate to respond proportionately to any Israeli act of aggression against the Arab country.

Some 10 legal Arab and Turkish institutes in a statement on Saturday called for handing over 18 people accused of killing Saudi dissident journalist Jamal Khashoggi to Turkish courts and UN investigation into the case.

The Belgium-based SWIFT financial messaging service said on Monday it is suspending some unspecified Iranian banks’ access to its messaging system in the interest of the stability and integrity of the global financial system.

Sanctions no impediment to another U.S. soybean shipment to Iran

For the second straight week, a bulk carrier with soybeans left the U.S. Pacific Northwest destined for Iran.

The European Union will remain committed to the Joint Comprehensive Plan of Action (JCPOA), as long as Iran complies with the deal, spokesman for the European Commission said Tuesday.

Iranian President Hassan Rouhani said American officials have admitted their incapability to stop Iran’s crude sales, and the US sanctions will only leave negative impacts on imports of foodstuff, medicine and medical equipment.

FM Zarif: World avoids being taken hostage by US

Iranian Foreign Minister Mohammad Javad Zarif said on Saturday that the excessive use of military and economic force by the United States has persuaded the world public opinion not to be taken hostage by the US.

Iranians are holding mourning rituals nationwide to mark the anniversaries of Prophet Muhammad (PBUH)’s passing as well as the martyrdom of his grandson, Imam Hassan (PBUH), the second Shia Imam.

Two and half millions of Shia pilgrims across Iran are walking toward the holy city of Mashhad, northeast of the country, to attend mourning ceremony on the martyrdom anniversary of Imam Reza (AS).

Iranian First Vice-President Eshaq Jahangiri said the administration has provided backing for the promotion of football in the country, highlighting support for development of women’s football.

In a historic move, 850 women were permitted to attend the Asian Champions League final in Tehran this afternoon, bringing an end to almost four decades of exclusion from top club matches in the country.

The second leg of the grand finale took place between home side Persepolis FC and Kashima Antlers at Azadi Stadium, where the Iranian team finished second at the AFC Champions League on Saturday.