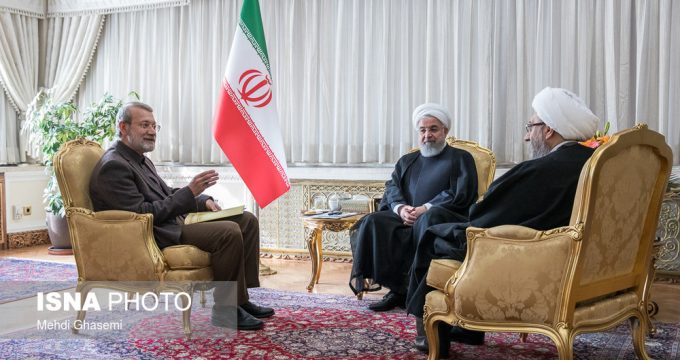 FNA – Iranian President Hassan Rouhani said American officials have admitted their incapability to stop Iran’s crude sales, and the US sanctions will only leave negative impacts on imports of foodstuff, medicine and medical equipment.

“What the Iranian officials said that the US is not able to zero Iran’s oil exports was proved with the US recent admission,” President Rouhani said after a trilateral meeting with the parliament speaker and judiciary chief in Tehran on Saturday.

“The US announced that it cannot zero Iran’s oil sales because the oil prices will rise to $150; this is what we had said (before). In this region, either Iran’s oil is exported or others will be in trouble as well,” he added.

President Rouhani referred to the US lies that the foodstuff, drugs and medical equipment are exempted from Washington’s sanctions against Iran, and said, “This is incorrect. When the banking system is sanctioned, everything is affected.”

The US Treasury Department announced all sanctions on Iran lifted under the 2015 nuclear deal would be back in force on November 5.

According to Treasury Secretary Steven Mnuchin, the sweeping sanctions will see 700 people blacklisted, including people who were granted relief under the 2015 deal, as well as over 300 new names.

Speaking to reporters on Friday, Mnuchin said the sanctions will also target payments made through the EU’s SPV channel.

He also warned global financial messaging service SWIFT that it could be punished if it doesn’t cut off financial services to entities and individuals doing business with Iran.

“SWIFT is no different than any other entity… We have advised SWIFT that it must disconnect any Iranian financial institutions that we designate as soon as technologically feasible to avoid sanctions exposure,” he noted.

His remarks dismissed an earlier report by The Washington Free Beacon, which claimed senior State Department officials have convinced Secretary of State Mike Pompeo to allow Iran to remain connected to SWIFT.

A senior administration official told Bloomberg that waivers were aimed at preventing oil price hikes and would be granted in exchange for continued import cuts.

The November 5 sanctions were the second batch of bans re-imposed after Trump pulled the US out of the 2015 deal, which was signed by Iran and six world powers in 2015.

The new sanctions cover Iran’s shipping, finance and energy sectors, and penalize other countries that don’t stop dealing with Tehran.