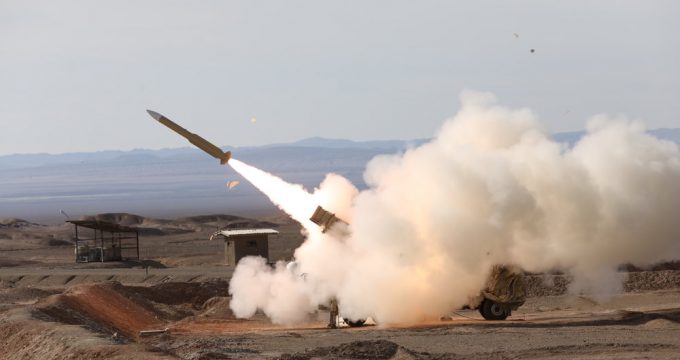 November 10, The Iran Project – Iran’s Army Air Force and the Islamic Revolution Guards Corps (IRGC) jointly launched an annual air defense drills dubbed “the Defenders of Velayat Skies 2018”  to test their capabilities in defending the country’s airspace against a wide range of threats, using an array of advanced weapons systems.

The two-day military exercise kicked off on Monday and featured joint operations by the Khatam al-Anbiya Air Defense Base, the Islamic Revolution Guards Corps (IRGC)’s Aerospace Force and the Iranian Air Force, which is the aviation branch of Iran’s Army.

The first day of the drills saw the joint forces taking positions and rapidly spreading around the country, while detecting, identifying, intercepting, and destroying threats and engaging in electronic warfare against mock targets.

One of the new air defense systems successfully tested on the first day of Velayat exercises was the Third of Khordad missile system, developed by the IRGC Aerospace Force.

Another air defense weapon unveiled on the day was the 35mm Seraj anti-aircraft gun system, which, armed with radar and a new optical target acquirement system, is intended to act as an effective weapon against a wide range of targets particularly drones and other small flying objects.

Rear Admiral Habibollah Sayyari, the deputy commander of the Iranian Army for coordination announced that the major drill covered an area of around 500,000 square kilometers in the country’s northern, western, eastern and central regions.

Sayyari stated that all of the air defense systems and equipment used in the exercises were designed and developed by Iranian experts.

The maneuvers came only a day after the United States re-imposed new sanctions against the Islamic Republic.

Earlier, commenting on the drills’ coincidence with the US restoring of sanctions against the country, Rear Admiral Sayyari had said the economic pressure is never going to affect Iran’s ability to defend itself.