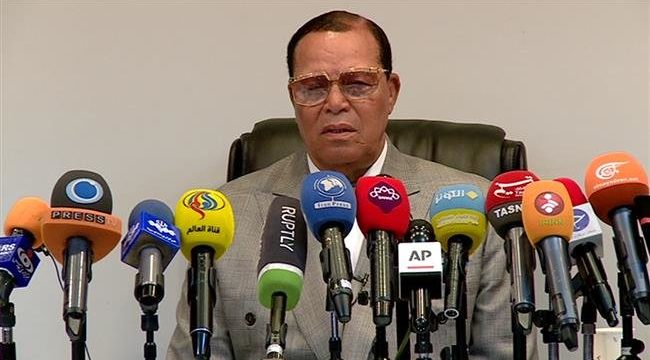 Trump’s policies to bring about death of US, Muslim leader Farrakhan warns

Press TV – Leader of the US-based Nation of Islam Movement Louis Farrakhan has warned that President Donald Trump’s policies may result in the death of America.

Speaking in a Thursday press conference held at Press TV headquarters in Tehran, Farrakhan said Trump’s policies are eroding trust in the US across the world.

He warned that the Trump administration’s policies, including its new sanctions on the Iranian nation, will “bring about the death” of the United States.

“The policies of our government would bring about a war in the Middle East that would be a trigger to the greatest war that has ever been; the war of Armageddon spoken of in the Bible,” Farrakhan said, quoting his “teacher” Elijah Muhammad, the former leader of the Nation of Islam.

“If the trigger of war in the Middle East is pulled by you using your surrogates at the insistence of Israel, then the war will trigger another kind of war, which will bring China, Russia, all of the nations into a war,” Farrakhan said, addressing Trump.

“The war will end America as you know it,” he said, adding “if you do not heed the warning and correct your path, death will come.”

Farrakhan lashed out at the Trump administration for reimposing sanctions on Iran, saying the bans are “hurting the people of Iran,” not the Iranian government, as claimed by American officials.

He said Iran fulfilled what it had signed to do on the Joint Comprehensive Plan of Action (JCPOA), but America did not.

“In America they said that they gave Iran billions of dollars, but they never said that they were holding over 150 billion dollars of Iranian money and they were supposed to give it back during the treaty arrangement.”

The Muslim leader pointed to the “Death to America” slogan chanted by Iranian people to condemn hostile US policies, and argued that “they have a right to chant it.”

He also blasted Trump’s policies in the Middle East, saying the US is trying to create further division between Shias and Sunnis in the region.

“President Trump … asked Saudi King Salman to call all the Sunni nations to gather in Riyadh and he would come and address them. And when Trump went to Riyadh, I saw him with pictures of new jet fighter planes, showing them to the king, and then they announced a $110 billion sale of weapons to Saudi, [and] the UAE; billions of dollars for weapons.”

“But if you listen carefully to his speech, he was making … division between Sunni and Shia, and aiming those weapons subtly toward Iran, and then openly saying to all those nations they should reject their brother Iran,” he said.

Farrakhan condemned US arms sales to Saudi Arabia, which are being used to slaughter the innocent people of Yemen, saying, “What is going on in Yemen is a crime against humanity with American planes, American bombs used.”

Farrakhan also called on the international community to rise up against the persecution of Muslim people whether in Yemen or in Myanmar against Rohingya.