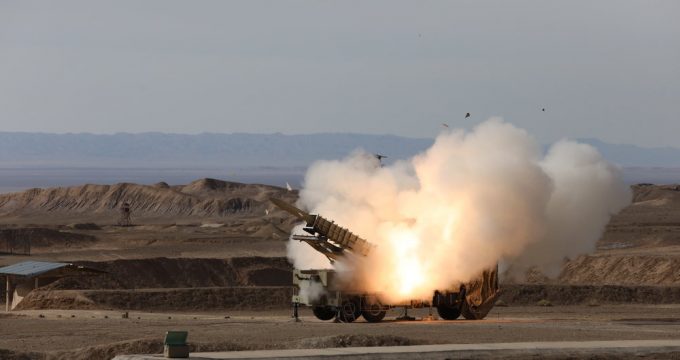 RT – Iran has showed off its latest air defense systems in a massive drill, the same day the US has formally reinstated a large batch of sanctions targeting hundreds of people and companies.

Iranian troops honed their air-defense skills at the same time as officials in Washington gave speeches on how they aimed to reduce Tehran’s oil revenues to “zero” and pressure Iran to “act like a country.”

The drills reportedly took place in a 500,000 square kilometer (193,000 square mile) area and are expected to go on until Tuesday. Dubbed ‘Velayat 97’, the nation-wide exercise saw both the country’s military and Islamic Revolutionary Guard Corps (IRGC) taking part.

Footage of the drills, released by Iranian state media, shows anti-aircraft missile systems, radars and artillery units being deployed ahead of the exercise.

The video features a crew of a fixed 35mm twin cannon cheering after scoring a hit, the launch of an unmanned aerial vehicle, as well as servicemen picking up a shot down dummy target.

The massive exercise came just as the US imposed its “strongest ever” sanctions against Iran, bringing back the restrictive measures and widening the blacklist. The move follows US President Donald Trump’s decision to pull out of the landmark nuclear deal with Iran, officially known as the Joint Comprehensive Plan of Action (JCPOA).

The first round of US sanctions against Iran was reimposed in August, while the second lot took effect on Monday. New restrictions target Iran’s oil sector, which Trump earlier threatened to reduce to “zero.” Eight countries, however, were granted waivers, allowing them to cease dealing with Tehran gradually instead of severing economic ties immediately. Iran, in its turn, vowed to fight back and “continue to sell” oil, with the nation’s President Hassan Rouhani promising in a televised speech to “break sanctions.”

US flags set on fire as thousands of Iranians rally against Trump’s reinstatement of sanctions
READ MORE: https://t.co/r6MYD8rFnZpic.twitter.com/SAh8NyTBtB