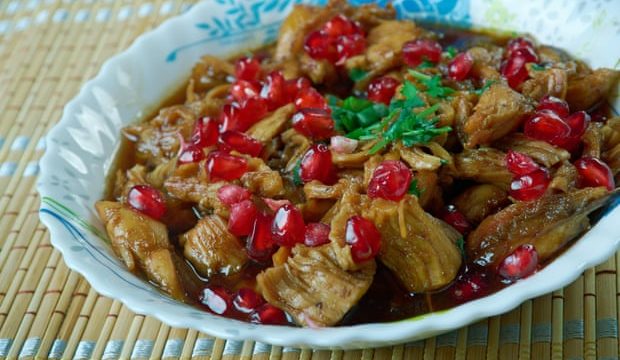 Sainsbury’s in a stew over mash-up of ‘Persian’ dish

A sparkly bonfire night cake and a traditional English sausage and mash were both on offer in October’s edition of Sainsbury’s Magazine. More prominent than this seasonal fare, though, was a bold attempt to broaden readers’ horizons: a front-page photo of a “golden Persian curry”, tagged as “the dinner party dish you HAVE to try”.

But the magazine’s fusion adventure has now backfired. Its editors stand accused of “lazy, casual racism” because, according to Iranian readers, chefs and fans of Persian cookery, the ingredients bear little or no relation to the region’s authentic cuisine.

The culinary controversy soon spilled on to the pages of the journal’s Twitter feed and Instagram account, where accusations of sloppy “cultural appropriation” abounded, although they have since been taken down by the magazine. Reader Pooneh Arrondelle wrote: “This is NOT a Persian recipe, it can’t even be said to be inspired by Persian cuisine. No Persian/Iranian would ever mix these ingredients. You think sprinkling a few pomegranate seeds on to something makes it Persian?”