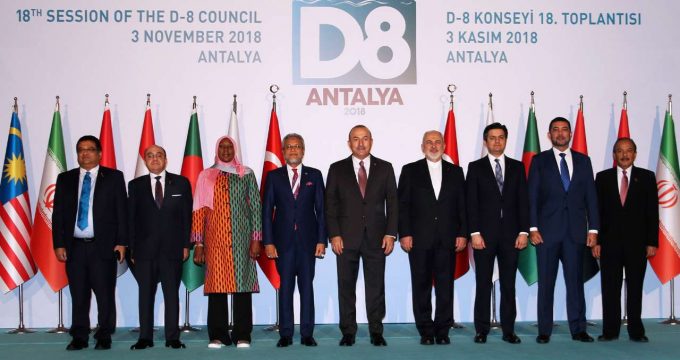 November 5, The Iran Project – Iran’s Foreign Minister Mohammad Javad Zarif has participated in the 18th Session of the D8 Council of Foreign Ministers  in Antalya  on Saturday (Nov. 3).

Zarif delivered a lecture during the meeting in Antalya where he called on D8 member states to counter irresponsible and unlawful measures such as sanctions against Iran.

Addressing the session, Zarif stated that the recent negative outlook for the world economy by the International Monetary Fund (IMF) is because of “unilateralism and growing trade barriers and sanctions.”

The top Iranian diplomat also stressed the need for enhancing “commercial multilateralism” in the face of punitive measures that damage the global economy.

“Unilateral trade actions, retaliatory measures and economic sanctions could disrupt the global economy and undermine broader multilateral cooperation at a time when it is urgently needed. Under these circumstances, it is now more than ever necessary for us to enhance and strengthen economic and commercial multilateralism, including through frameworks such as the D-8,” the minister noted.

Giving speech at the opening ceremony of the event on Friday (Nov. 2), Turkish Foreign Minister Mevlüt Çavuşoğlu referred to establishing set-off chamber based on which a mechanism free of dollar and euro was underlined by member states.

Çavuşoğlu urged D-8 member states to pay attention to trade based on national currencies to be able to stand against economic threats.

Moreover, in a statement at the session, FM Zarif underlined that cooperation among D-8 Member States towards developing blue economy has great potential for enhancing sustainable development and can strengthen economic growth and poverty reduction.

Zarif returned home late Saturday after attending the 18th meeting of the D-8 Organization for Economic Cooperation in Turkey.

The D-8 Organization for Economic Cooperation, also known as Developing-8, is an organization for development of co-operation among the following countries: Bangladesh, Egypt, Nigeria, Indonesia, Iran, Malaysia, Pakistan, and Turkey.

The previous 17th session of the D8 Council was held in Istanbul in October 2017.

D-8 Organization, D8 meeting in Turkey, Mohammad Javad Zarif, US unilateralism November 5, 2018
Japan says in close communication with US on Iran sanctions
China says its lawful trade with Iran should be respected