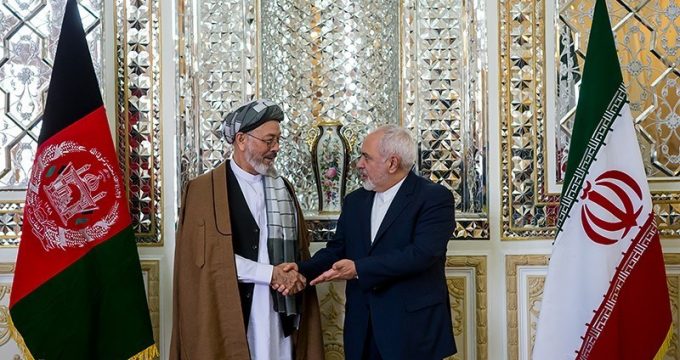 FNA – Iranian Foreign Minister Mohammad Javad Zarif announced that Iran is ready to help and facilitate the peace process in Afghanistan, and said that terrorism and the ISIL are currently the main dangers posed to Afghanistan.

The Iranian diplomatic chief made the remarks in a meeting with visiting Afghan delegation headed by Chairman of the Afghan High Peace Council Karim khalili in Tehran.

Zarif attached great importance to peace and stability as well as the necessity of preserving and bolstering national unity and solidarity in Afghanistan, and underlined, “There is no way other than dialogue and national understanding in Afghanistan.”

He voiced strong Iran’s support for the Afghan High Peace Council, and asserted, “We vehemently back efforts undertaken by the High Peace Council to meet its objectives which are solidarity and acceleration of the process (of peace) in Afghanistan.

The Afghan official, in this meeting, for his part, recounted the main agenda of the Afghan High Peace Council, and expounded on the main efforts undertaken by the council to strengthen national solidarity and the inter-Afghan atmosphere of trust.

The Taliban were ousted from power in 2001 following a US-led invasion of the country.

However, the group still controls some parts, and wields huge influence in other parts, of the country and is involved in widespread militancy.

Thousands of Afghan soldiers and civilians as well as foreign forces have been killed in raids by the militant outfit.

The Takfiri Daesh (ISIL) terrorist group is also making inroads in Afghanistan as well taking advantage of the chaos there.

Last year, Washington added thousands of additional troops to its forces in Afghanistan, but the violence has only seen a rise.

A report by the Pentagon’s watchdog said last week that the Afghan government was struggling to recover control of districts lost to the Taliban while casualties among security forces had reached record levels.

The government had control or influence over 65 percent of the population, but only 55.5 percent of Afghanistan’s 407 districts, the Special Inspector General for Afghanistan Reconstruction said in the report.