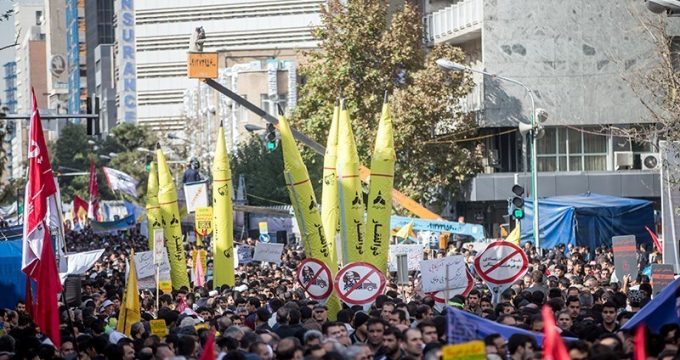 Iranians from every walk of life poured into streets in cities across the country on Sunday to mark the anniversary of US Tehran embassy takeover and express their opposition to the arrogant policies and attitudes of the enemies, particularly the US government.

The Guardian Council has returned the bill on Iran’s accession to the convention against the funding of terrorism (CFT) to Parliament for further amendments, the Council’s spokesman said on Sunday.

IranAir is looking to buy planes from any company not requiring U.S. sales permits and may consider Russia’s Sukhoi Superjet 100, the flag carrier’s head was quoted as saying, as Iran tries to renew its aging fleet despite facing U.S. sanctions.

IRGC general: Iran could manage US forces in Mideast quickly

Deputy commander of the Islamic Revolution Guards Corps (IRGC) said Iran has gained such a high level of influential power that it could manage the US forces in the Middle East in a short time span.

If US remained in Iran, Islamic Revolution wouldn’t have reached its 40s

Top Military Aide to the Iranian Supreme Leader Major General Yahya Rahim Safavi underlined the country’s Armed Forces’ full-preparedness to confront any possible threat by the enemies, and said that the terrorist groups will not be safe anywhere even beyond the borders.

US plots to end in defeat, shame: Iran Intelligence Min.

Conspiracies of the United States, like the previous ones, will have no ending except defeat and shame, Iran’s minister of intelligence Mahmoud Alavi said on Sunday.

Replacement of Iranian oil by other producers, a political bluff: MP

Deputy Chairman of the Iranian Parliament’s Energy Committee, emphasizing that the replacement of Iran’s oil by other countries in the market is a political bluff, said, technically, Saudi Arabia could not replace Iran’s oil.

Terrorists behind abduction of Iranian guards maybe linked to Saudis

Iranian envoy to London Hamid Baeidinejad in a message urged British newspaper ‘The Guardian’ to stick to professionalism and ethics and reveal issues over the so-called ‘Saudi source’.