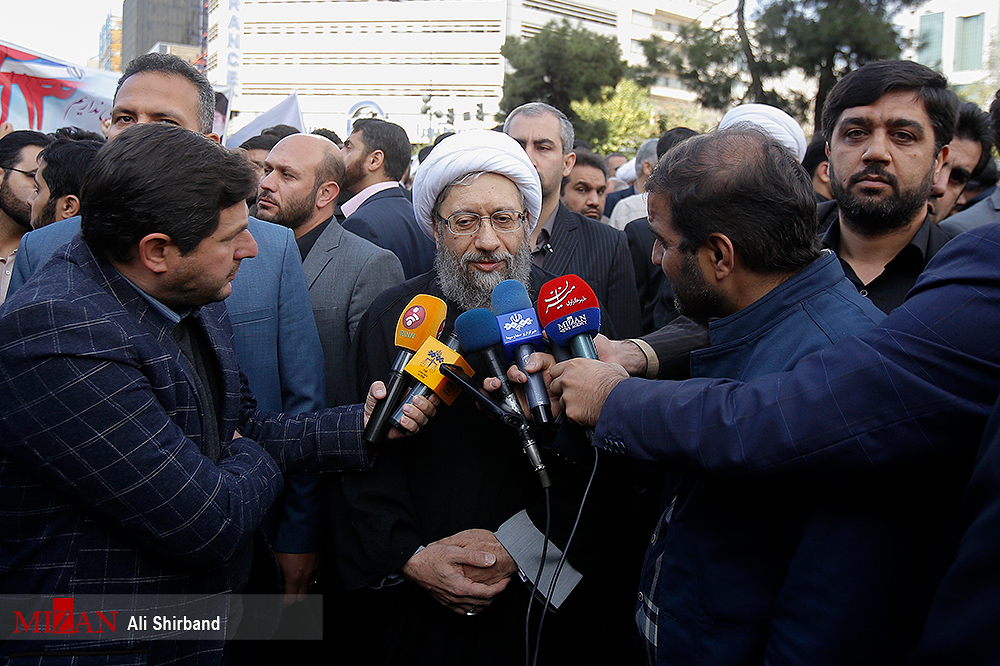 IRNA – Message of Aban 13 (November 4) nationwide rallies in Iran is that “our vigilant people are present in the arenas and preserve their independence and dignity,” Judiciary chief said here on Sunday.

“Our vigilant people” will not bow down to intimidation, Ayatollah Sadeq Amoli-Larijani said at the Aban 13 rallies in Tehran to mark the 1979 take-over of the US embassy in Tehran.

The Aban 13 (November 4) is named in Iran as Student Day, which marks the take-over of the US embassy in Tehran in 1979.

During the nationwide rallies, the Iranian people show hatred towards the global hegemonic powers and renew allegiance to the Islamic principles set by Imam Khomeini, the late father of the 1979 Islamic Revolution in Iran.

Amoli-Larijani said the enemies should never talk to the Iranian nation by the language of bullying as the nation has been standing against all sanctions and pressures about four decades.

Referring to the US officials’ remarks that the Islamic Republic will not see its 40th anniversary, the Ayatollah said it is a dream that will never come true.

Those on the way to collapse are the United States and the evil powers in the region, he said.

About “Death to America” motto, Amoli-Larijani said that the American officials have targeted “our strength and dignity” and they are against the principle of the 1979 Islamic Revolution in Iran.

US President Donald Trump did release a photo on Friday in which he said sanctions are coming on November 5.

After Washington’s May 8 exit from the Iran Deal, formally known as the Joint Comprehensive Plan of Action (JCPOA), the US gave a 90- to 180-day wind-down period to other countries before it starts re-imposing sanctions on Tehran on November 4. The US move drew criticism of the world leaders, particularly the Europeans.