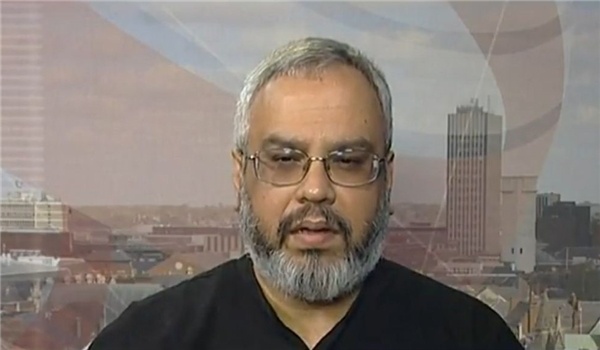 Iranian Diplomacy – Political analyst Shabbir Hassanally says the UN has become “a means to legitimize the corruption and excesses of the American regime on humanity”.

Mr. Hassanally, in an exclusive interview with FNA, said that the UN is totally complicit with the genocide of the Yemeni people, and it is possible that the situation in Yemen “would be the final nail in the coffin of the corrupt and impotent United Nations.”

The analyst also said that the Saudi-led coalition’s deliberate targeting of civilians is aimed at making the Yemeni people move against the resistance movement.

Shabbir Hassanally is an Islamic Scholar and political analyst. Mr. Hassanally lectures at various Islamic Centers from time to time and is currently working on a book on the commonalities between Zionism and Wahhabism – from a political and hegemonic perspective, as well as examining historical parallels between the two. He also consults on subjects related to human rights, activism, Islam, anti-sectarianism, and Islamic politics, economics, the Palestine issue and issues affecting Muslims across the world.

FNA has conducted an interview with Shabbir Hassanally about the ongoing Saudi war on Yemen and possible motives behind the war imposed on the impoverished Arab country by Saudi Arabia and its western allies.

Below you will find the full text of the interview.

Q: What do you think of the ongoing humanitarian crisis in Yemen caused by the Saudi war and the blockade on the country?

A: The humanitarian crisis, which is exasperated by the inaction and complicity of the United Nations against Yemen is without a doubt a criminal activity, and perhaps even the last nail in the coffin of any credibility that the United Nations had.

The pandering of the UN to the Zionist Entity historically has led to the UN being unable to – or perhaps unwilling to – prevent the Arab Zionists from perpetrating the most horrific of crimes on Yemen and getting away with them, without so much as a slap on the wrist by the so-called “civilized” international community.

The UN was built on the notion of “Never Again” following the atrocities we are told happened during the Second World War; that the world would never allow mass genocide to take place; yet here we are, for the umpteenth time, witnessing a genocide that the UN facilitates.

Q: What are the Saudis’ objectives in their war on Yemen?

A: The Saudi’s wanted to ensure that Yemen was prevented from exercising its right to be independent, to choose its own government and to control its own natural resources and indeed its own destiny.

The Saudi regime knows that Yemen is a strong, powerful country, with people who have great honour and dignity, and that given the control that Yemen has over the Bab al-Mandab Straits, it could potentially be a threat to both Saudi Arabia and its Zionist siblings occupying Palestine.

The stated objectives were to “reinstate” the “legitimate” government of AbdurRabuh Mansour Hadi, but this is invalid as Mansour Hadi had voluntarily resigned – not once but twice, and was no longer the President of Yemen. What he was, was a slave of the Saudi and Zionist project, and as a result, he committed the greatest treason upon those who he professes are his own people.

Q: It seems that the Saudis expected an easy-to-win combat when they first stepped into the war. What do you see as the reason for Riyadh’s continued failure in Yemen?

A: The primary reason for the catastrophic failure of the Saudi-coalition, led by the US/Israel/UK/UAE against Yemen has been the bravery and resilience of the people of Yemen. Their loyalty to the land and to their sovereignty, and their respect and love for the Ansarallah Resistance – who are incidentally made up of more than just the Houthi Tribe (though they are a key component of the Ansarallah movement).

Ansarallah is a popular movement, and everywhere we look, when a resistance movement is built on the popular support it is always successful and victorious. For example:

In Lebanon with Hizbullah, In Iraq with the Hashd ash-Sha’bi (also known as the Popular Mobilization Units (PMU)), In Iran during the early years of Islamic Revolution and during the Eight-Year Sacred Defense with Baseej and Sepah (IRGC) In Syria with the various Resistance movements that came in to defend Syria from the Takfiri terrorism, such as the Zaynabiyyoun and Fatimiyyoun Resistance Groups, and many other home-grown resistance groups that worked alongside the Syrian Army.

So whenever and wherever you see a genuinely popular movement; something that comes from the people; and is rooted in the dignity of the people and the land; that forms a “Golden Equation” as described by Sayyed Hassan Nasrallah; an equation of the People, the Army and the Resistance – and if examined the above movements; as well as the Ansarallah Resistance in Yemen fully conform to this equation.

The core of the Yemeni Army is with the People and with the Resistance; as a result; since the Golden Equation is complete; there is NO POSSIBILITY for the Zionists – be they Arab or European – of having any sort of success in Yemen (or anywhere that operates on this idea of the Golden Equation). This provides a safeguard for Yemen.

Granted, the enemy will – and sadly is – working to create a monumental humanitarian crisis in Yemen; but this is merely sealing the fate of all those bombing and harming Yemen, and those who supply those criminals with weapons and “logistical support” – sadly like the UK and France.

Q: Why do the US and the UK continue to supply Saudi Arabia with arms despite international criticism regarding civilian casualties?

A: As for why the criminal regimes in Washington and London (neither of which have any sort of real public mandate; since both came to power based on deception and lies, rendering their “election” invalid and void, but I digress); these are regimes based on savage capitalism; they are driven by money and power; and controlled in every facet by the Zionist project. They are also driven by a constant fear of their own impending destruction; a fear that is the staple of the Zionists and is used by them to further their own agendas and as a means to mitigate any potential resistance against them – but again, I digress.

This can be seen in their understanding that the people in Yemen have chosen the path of Resistance, and whenever that path is chosen when the Golden Equation can be found, the people are always successful. And it will be the cause for the destruction of the enemies and those criminals who seek to invade and colonize Yemen.

They also know that if they allow Yemen to prevail (and of course they cannot stop the inevitable victory of the people of Yemen, they can only try and delay it and cause more deaths and destruction), then the next stop for victory is Palestine; and this will lead to another certainty; the destruction and end of the Zionist entity occupying Palestine.

Alongside that they constantly and indeed pathologically choose to point the finger of blame on the Islamic Republic of Iran for somehow provide support and weaponry to the people of Yemen; who are incidentally under what is essentially a hermetic seal and complete blockade. Nothing can get in and nothing can get out without the permission of those engaged in the blockade and “police” the same. Something attested to by the UN which is itself a party to the blockade and does nothing to prevent or lift it.

So, considering this complete blockade of Yemen, how would Islamic Iran or any other party for that matter get any military equipment or missiles into Yemen?!

The lies of the aggressors are getting worse and worse; and indeed, will bury them.

Q: Why have the international organizations, particularly the UN, remained passive in the face of the ongoing Saudi atrocities?

A: As I’ve explained above, the United Nations is an impotent organization; it is crippled by the illegal imposition of the five permanent members who all have the veto power – rendering the participation of all other global countries pointless if they cannot get a veto-wielding power to agree with them.

The UN in this instance is completely complicit with the genocide being perpetrated on Yemen, and as I said; it is entirely possible that the Yemen situation would be the final nail in the coffin of the corrupt and impotent United Nations. An organization that speaks much of international law but can do nothing (unless a veto power-wielding member agrees and chooses to do something) to impose and enforce such laws.

Rather, what the UN excels at is being a mercenary outfit for the United States, a means to legitimize the corruption and excesses of the American regime on humanity. Legitimizing the barbaric “oil for food program” against Iraq; legitimizing the existence of the Zionist entity, an entity built and based on theft; legitimizing the existence of the terrorist factions attempting to harm Syria and indeed working in a manner so as to topple the legitimate government of Syria – all at the behest and for the sake of the United States.

When things don’t quite go according to the US’s desires, the US does what it has been doing as of late; it says it will leave and acts like a spoilt child.

Indeed, if the UN doesn’t go through significant reform, including the removal of the veto power from the five permanent members – especially the United States, United Kingdom and France who have used it brazenly to support genocides and illegal aggressions across the world, from Palestine to Yemen and elsewhere – this organization should just be closed and relegated to the museums of history, as the broken and corrupt relic that it is.

Q: The airstrikes by the Saudi-led coalition have mostly killed Yemeni civilians, including thousands of women and children. What do you see as the objective of these airstrikes targeting civilians?

A: The core reason for the mass murder of civilians in Yemen – and indeed in other places – has been to break the spirit of the people, and somehow make the people go against those resisting the aggression.

They feel that in killing people they will somehow make the people want to capitulate and have tea and biscuits with those throwing deadly bombs upon them. It is based on a deluded sense of grandeur, and is yet another reason why those who act like this were referred to by Imam Khomeini, may God rest his pure soul, as “Global Arrogance” – because it is extremely arrogant.

Since we are also led to believe that the US and UK are providing “logistical and intelligence” support to the “Saudi”-led coalition, then it might be argued that the targeting of civilians – and this is without a doubt what is happening a deliberate targeting of civilians in Yemen is being done not only by Saudi Arabia, but by those providing it with the “intelligence” that such and such place is a “threat”. Because naturally, we must understand that for the forces of Global Arrogance, a wedding is a threat, a funeral is a threat, a school or hospital is a threat and so on.

For the sake of brevity, I won’t discuss further why these civilian places are such a threat to Global Arrogance, and why they are explicitly targeted by the Saudi/Israeli/UK/US/UAE coalition against Yemen, suffice it to say that the world is losing its humanity in Yemen.