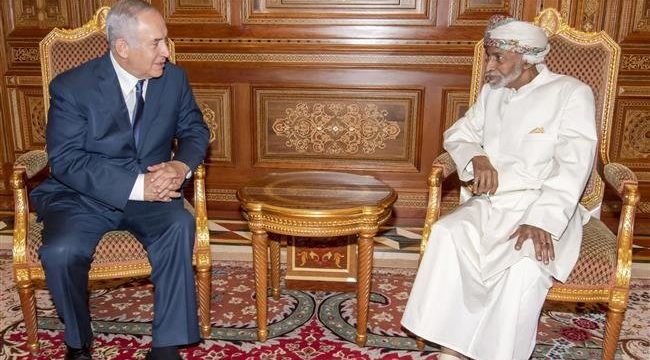 Press TV – Israeli Prime Minister Benjamin Netanyahu has made a rare visit to Oman, as regional Arab countries are dramatically warming their relations with the Tel Aviv regime after reports of secret contacts.

In footage released by Omani state TV on Friday, Netanyahu is seen greeted by Oman’s Sultan Sayyid Qaboos bin Said Al Said at the Bait al-Barakah Royal Palace in the coastal city of Seeb near the capital Muscat.

Israel’s English-language daily newspaper The Jerusalem Post reported that the two men discussed ways to advance the so-called Middle East peace process as well as a number of issues of mutual interest with regard to the region’s stability.

Netanyahu was accompanied on Friday by senior officials, including the head of the Mossad spy agency and his national security adviser.

It’s the first meeting of this kind since 1996. Oman and Israel reportedly had economic ties, but no diplomatic relations, in the aftermath of the 1993 Oslo Accord.

Earlier this year, Omani Foreign Minister Yusuf bin Alawi made a rare visit by such a senior Arab official to al-Aqsa Mosque in Jerusalem al-Quds.

Among Arab countries, Israel has diplomatic relations only with Egypt and Jordan, but there have been numerous reports of growing contacts between Saudi and Israeli officials too.

Saudi Arabia has hostile ties with resistance movements in the Palestinian territories, including Hamas which is fighting the Israeli occupation.

Regev arrived in Abu Dhabi on Friday morning, and she is scheduled to participate in the opening ceremony of the international event at the Emirati capital’s Zayed Sports City tomorrow, Palestinian Arabic-language Ma’an news agency reported.

Her visit to the UAE marks the first of its kind by an Israeli minister to a Persian Gulf littoral state.

Israeli athletes, for the first time, will be allowed to compete under the Tel Aviv regime’s flag and to hear their Hatikvah anthem played.

The Abu Dhabi Grand Slam 2018 will kick off on October 27, and will run through October 29. A total of 348 male and female judo practitioners from 62 countries will be vying for best honors during the high-status tournament.

They “also congratulated the Israel team for their success here,” Vizer said of the three-day event, which ended on October 28, 2017.

A day earlier, UAE’s Rashad Almashjari had refused to shake hands with Israeli Tohar Butbul in the first round of the men’s lightweight category (66-73 kg). Butbul managed to claim the bronze medal.

Israel’s i24NEWS television news network, citing an unnamed official source, reported on July 5 that a military delegation from the UAE had apparently visited the Israeli-occupied territories for talks with the Tel Aviv regime’s air force on the “performance” of advanced US-made F-35 stealth fighter jets.

The report added that an American delegation was also present at the meeting, without providing any information on the date.

Tel Aviv and Abu Dhabi have no diplomatic ties and the UAE does not recognize Israel but the two sides have increased backchannel cooperation in recent years.