MNA – Iran’s Ambassador to the United Kingdom Hamid Baeidinejad has advised the United States to return to Iran nuclear deal and uphold the international agreement.

In response to an article published in New York Times entitled ‘Companies With Permission to Bypass Sanctions’, the Iranian Ambassador to the United Kingdom Hamid Baeidinejad has tweeted “it is not companies that must choose between the US and Iran,” adding “it is that the US abandons the JCPOA and violates international law.” 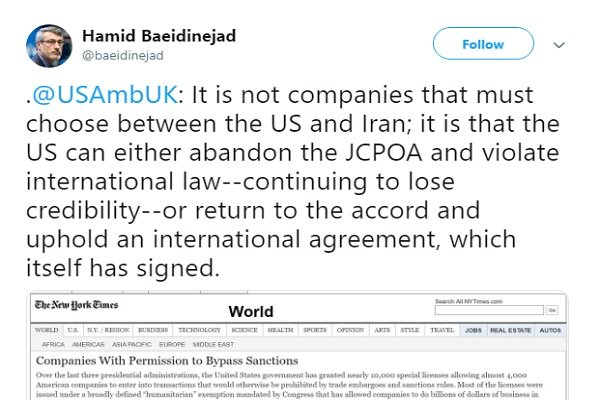 Baeidinejad further advised the US administration to return to the JCPOA, from which it withdrew in May, in order to stop losing more credibility, stressing “return to the accord and uphold an international agreement, which itself has signed.”