A Look at Iranian Newspaper Front Pages on October 25

Iran Front Page – IFP has taken a look at the front pages of Iranian newspapers on Thursday, October 25, 2018, and picked headlines from 14 of them. IFP has simply translated the headlines and does not vouch for their accuracy.

The top story in all papers today was the comments made by the Leader of Iran’s Islamic Revolution Ayatollah Seyyed Ali Khamenei about the key role played by Iranian military advisers in Syria, known as Defenders of the Holy Shrine, who kept terrorists from approaching the Shrine of Imam Hussein in Iraq’s Karbala.

Also a top story was President Hassan Rouhani’s remarks about the Saudi assassination of dissident journalist Jamal Khashoggi, and the US support for the crime. 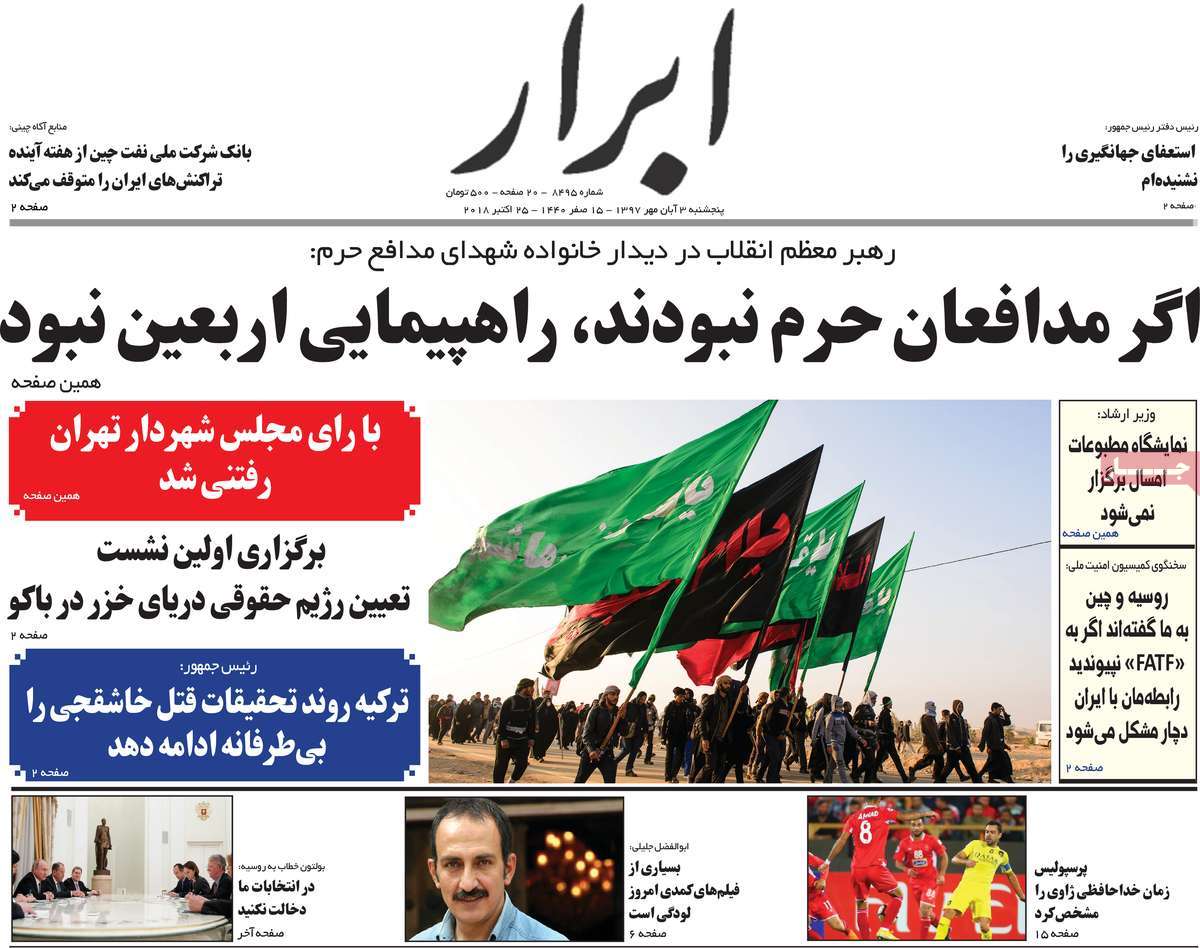 2- Rouhani’s Late, but Harsh Stance towards Saudis on Khashoggi’s Case

3- There’d Be No Arba’een Pilgrimage without Defenders of Holy Shrine: Leader 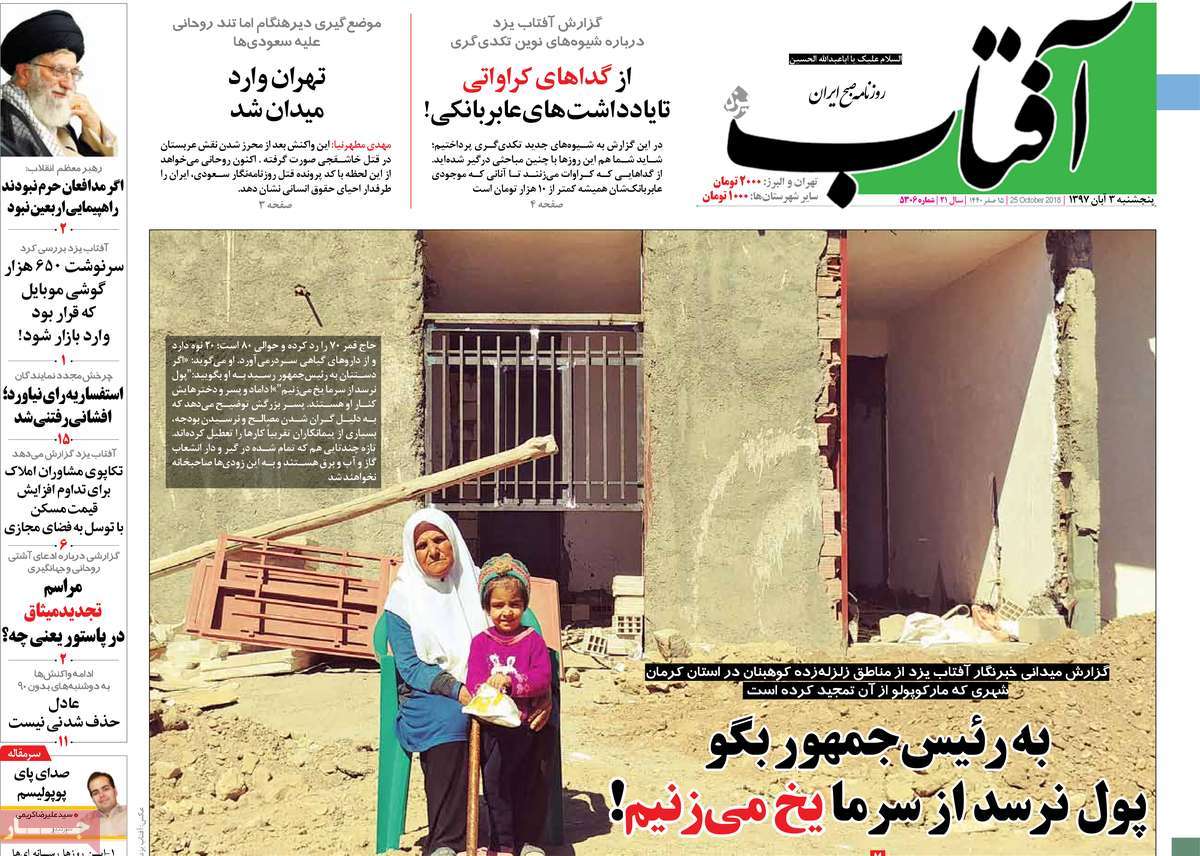 2- Rouhani: US’ Tactic of Putting Iran under Pressure in Nov. Weaker than Ever 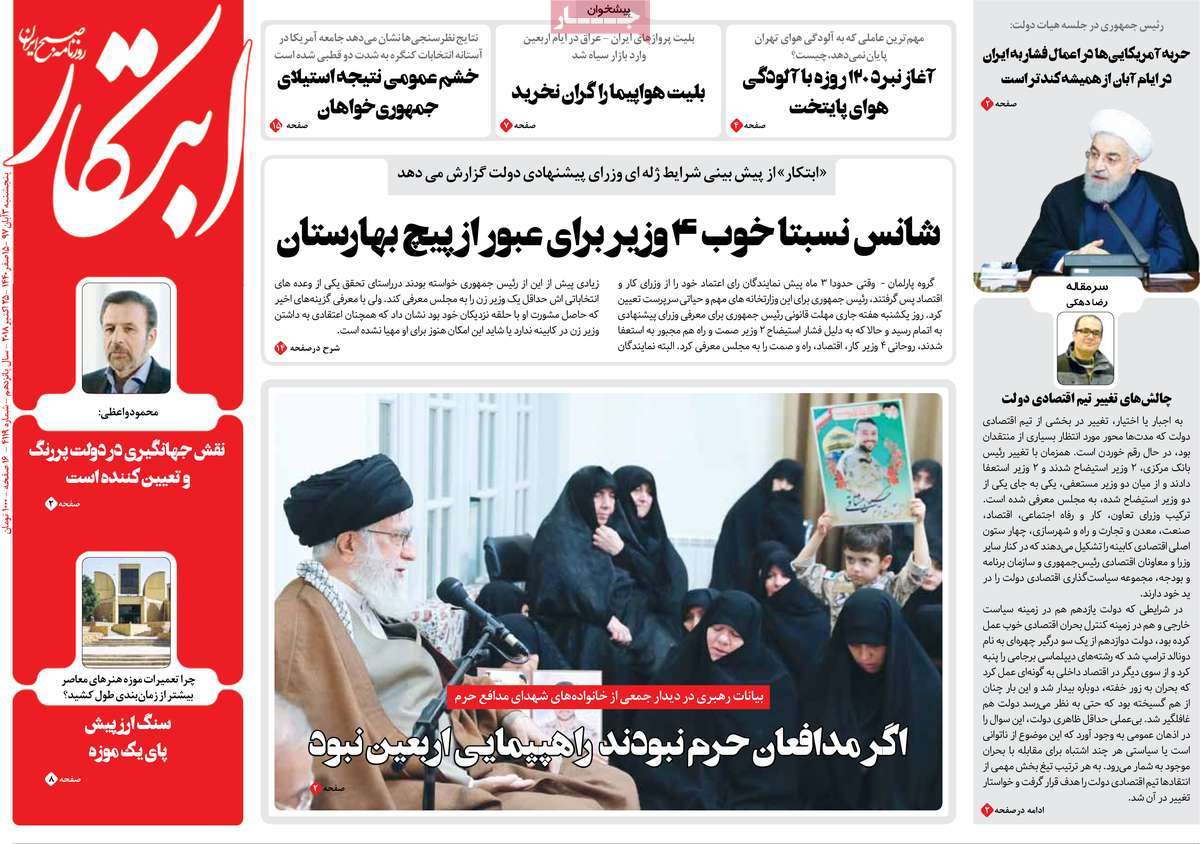 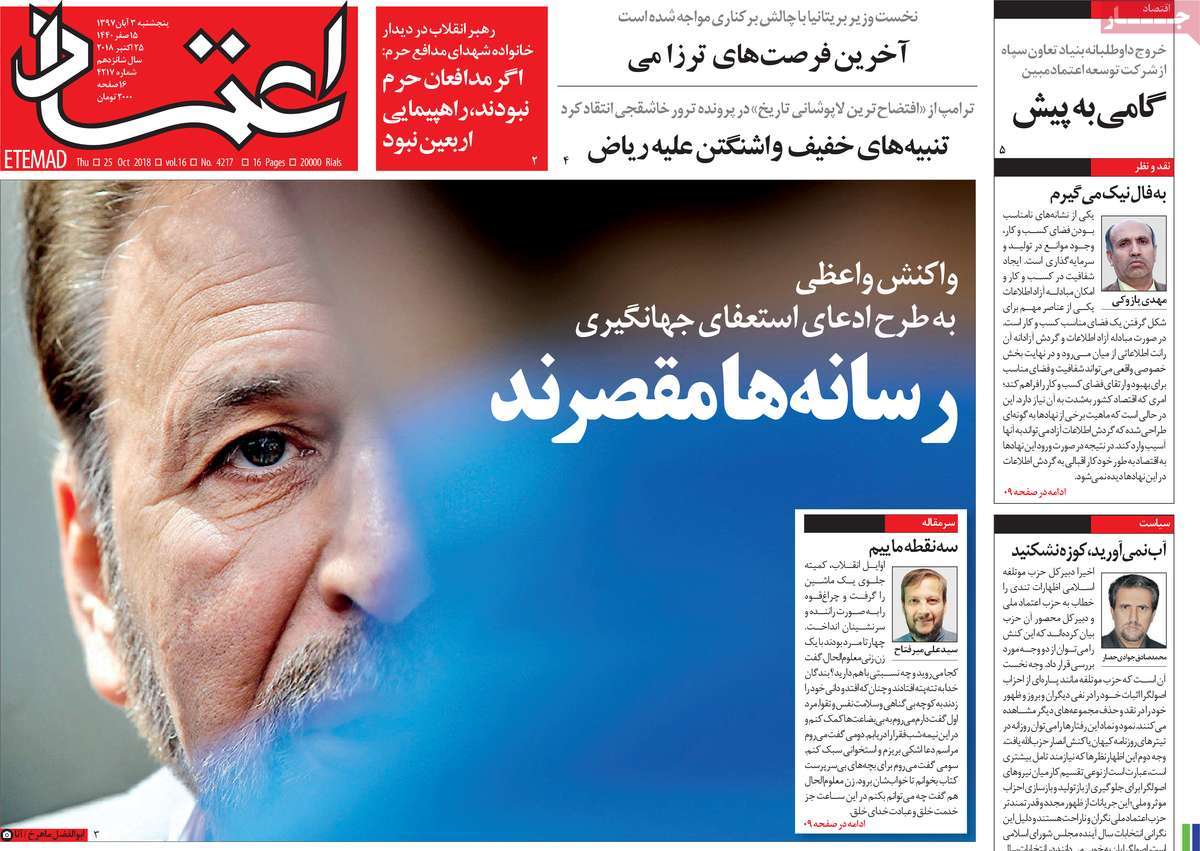 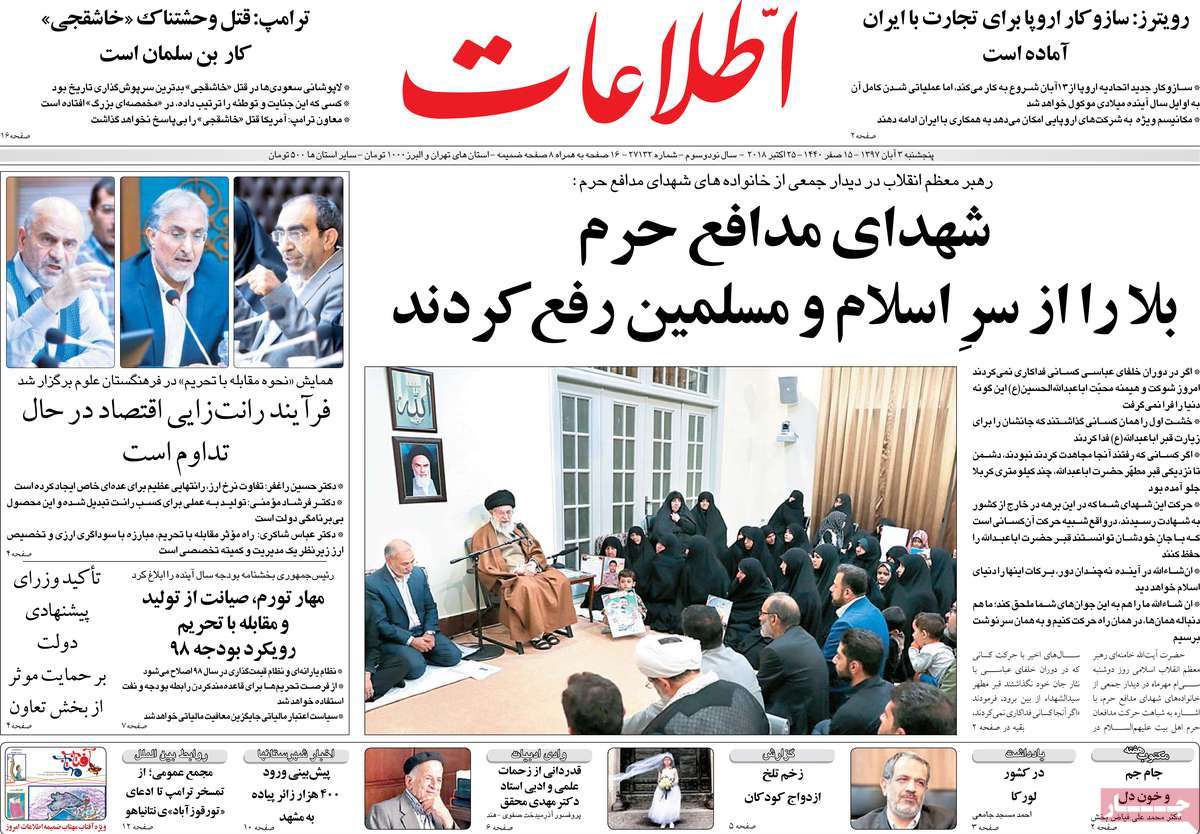 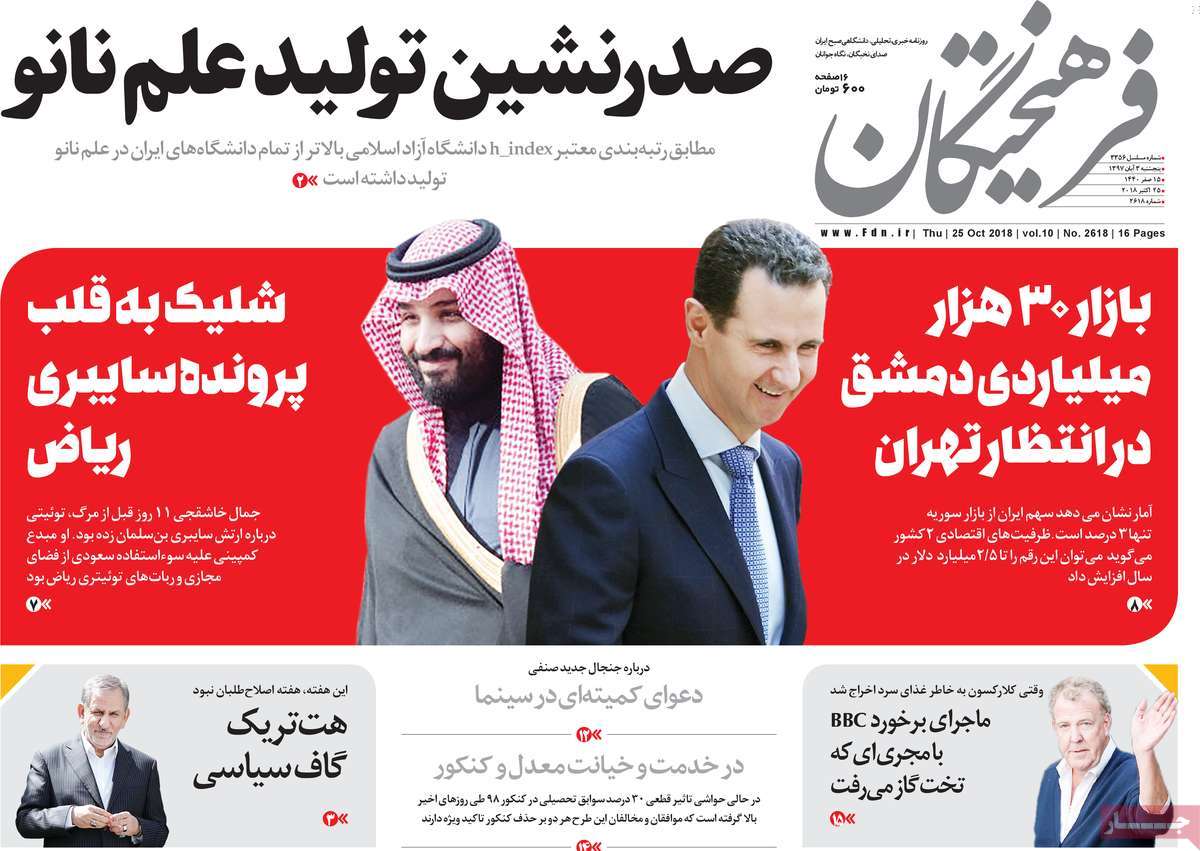 1- Game Is Over: Parliament Says Tehran Mayor Must Leave Office as Retired Politician 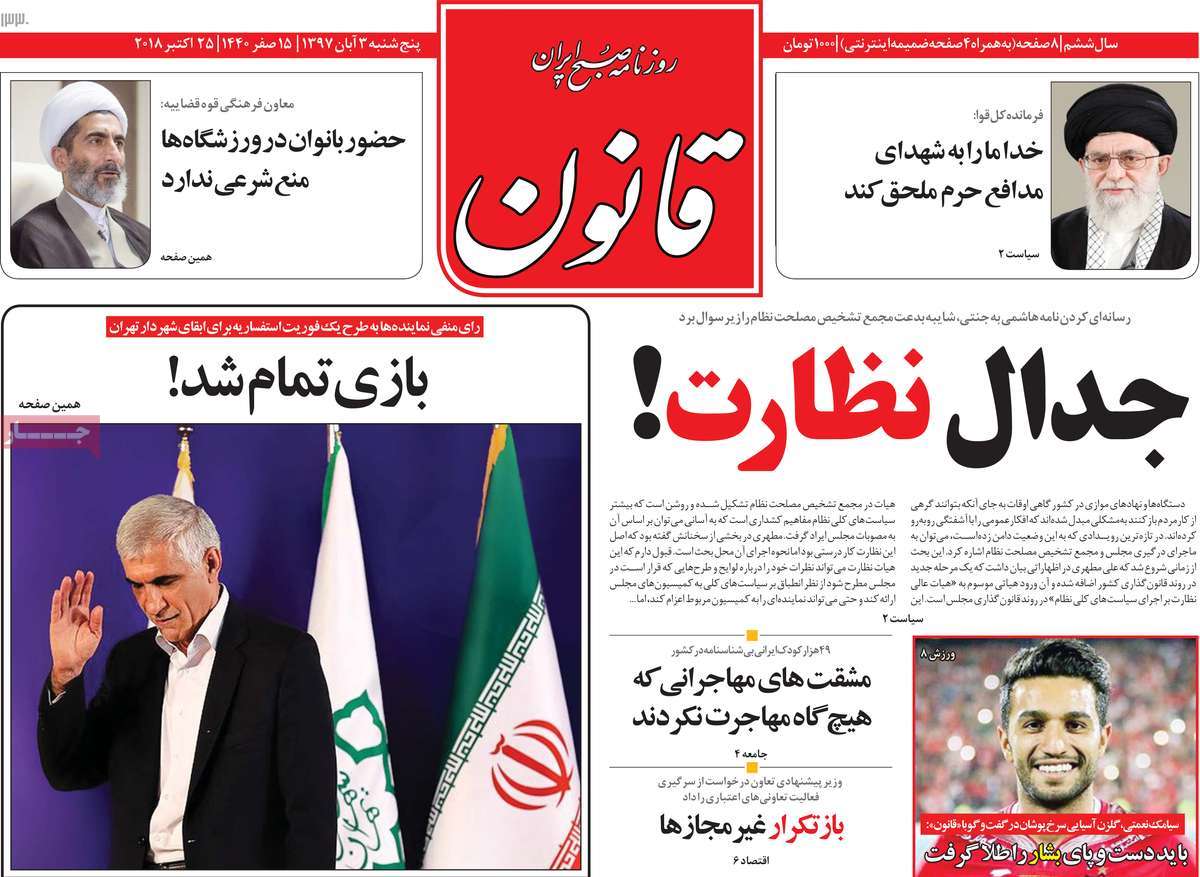 * I Wanted to Take Revenge from Them: Attacker 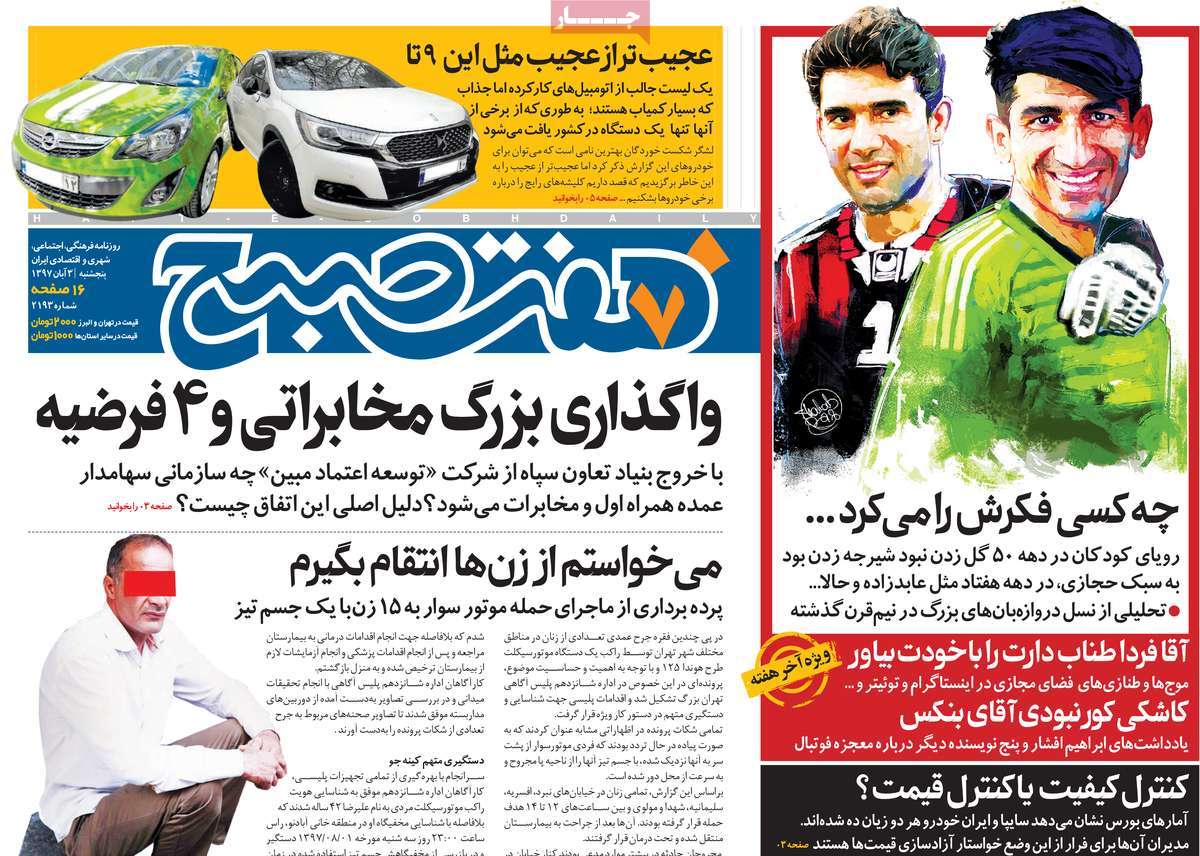 1- Obama: We Should Return Rationality to Politics 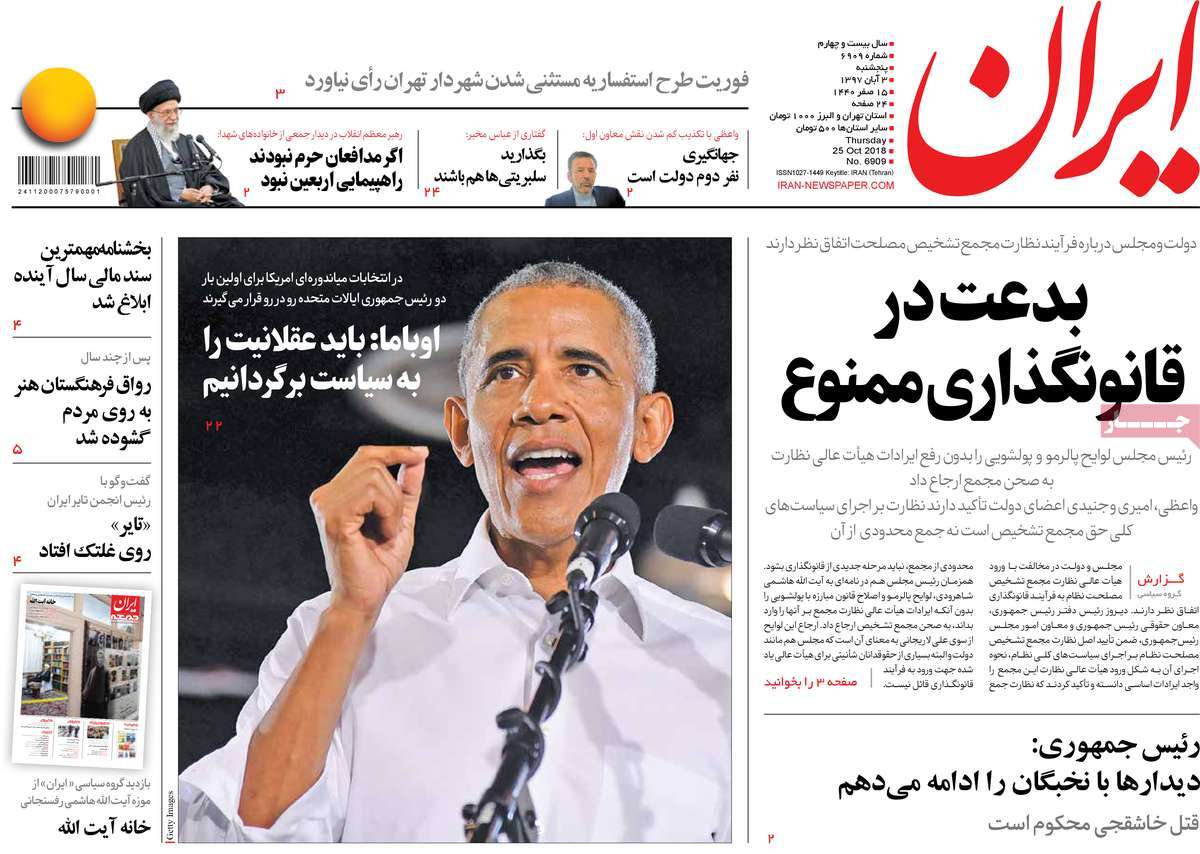 2- Khashoggi’s Murder Not Possible without US Support: Rouhani 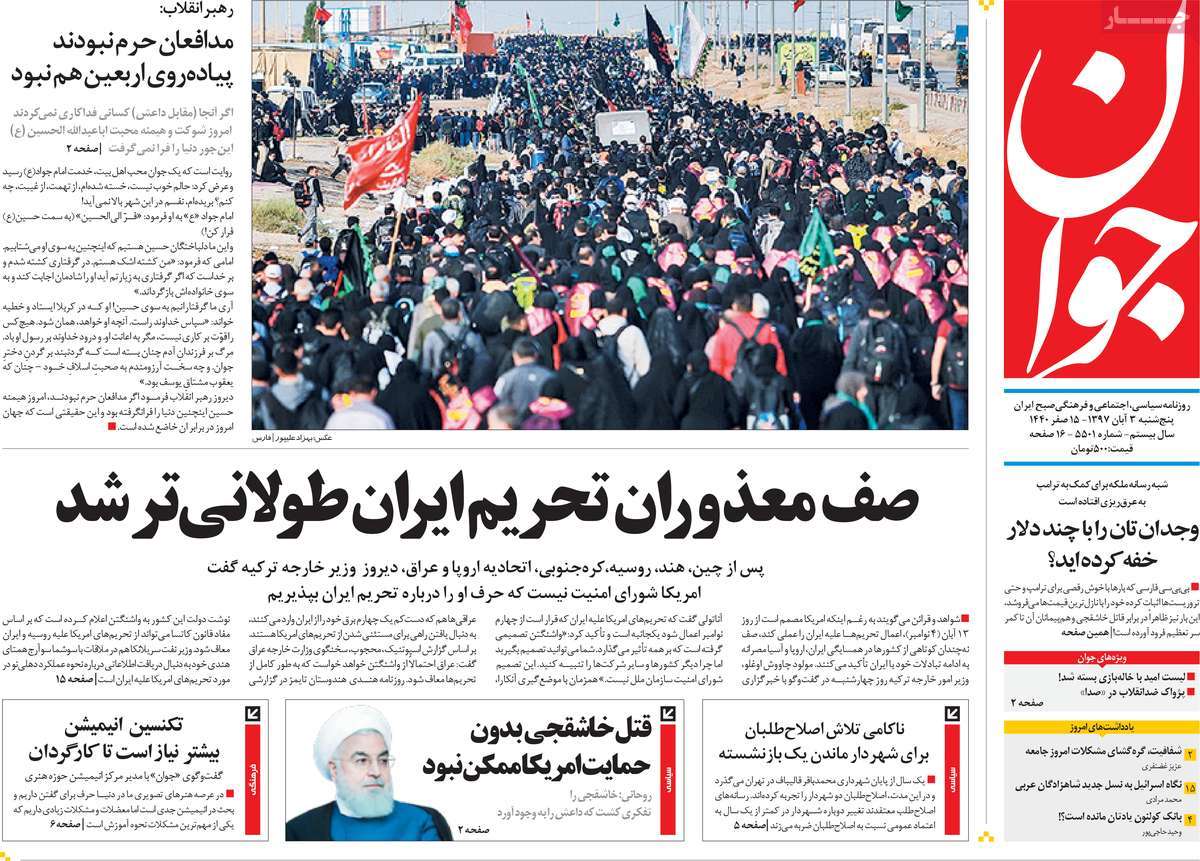 2- US Will Finally Back Off from Confrontational Approach to Iran: Foreign Policy 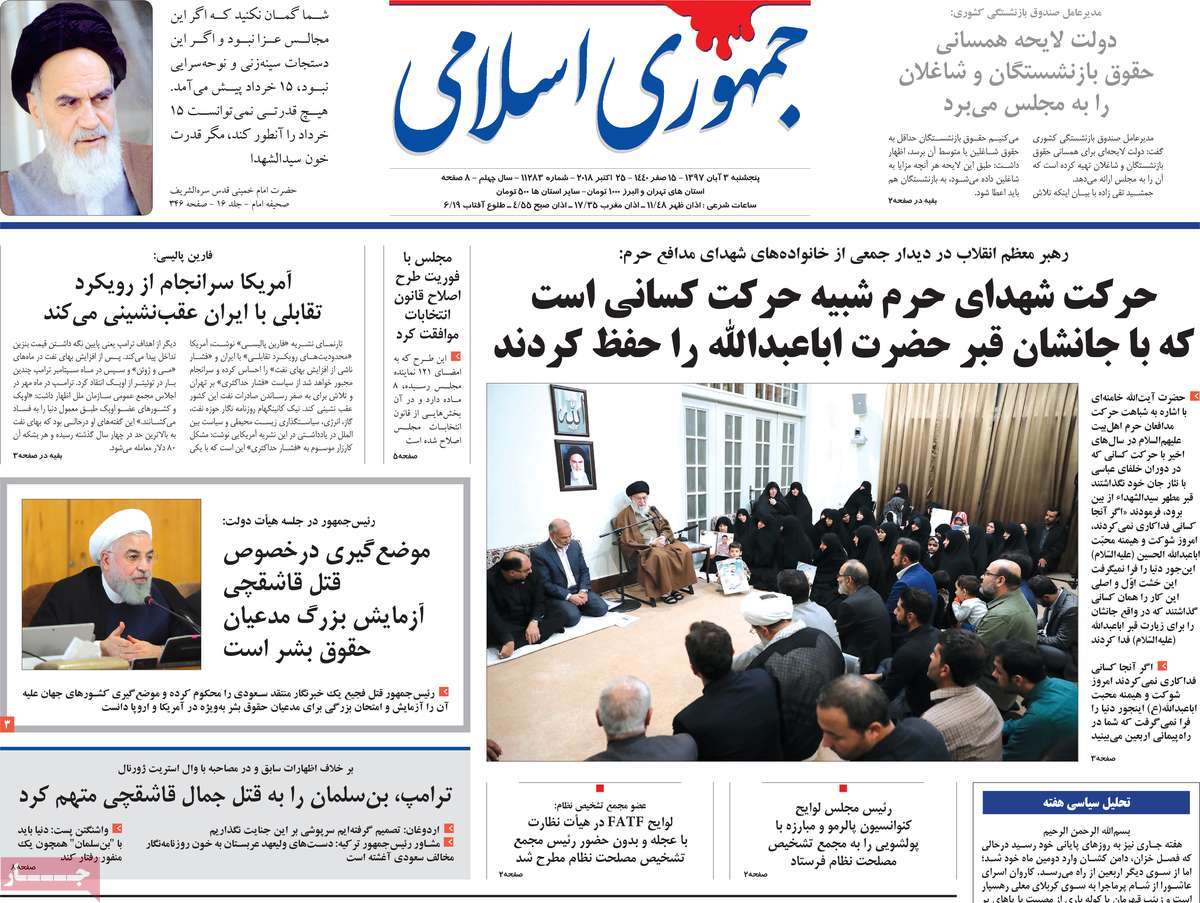 1- There Was No Arba’een Procession without Defenders of Holy Shrine: Leader 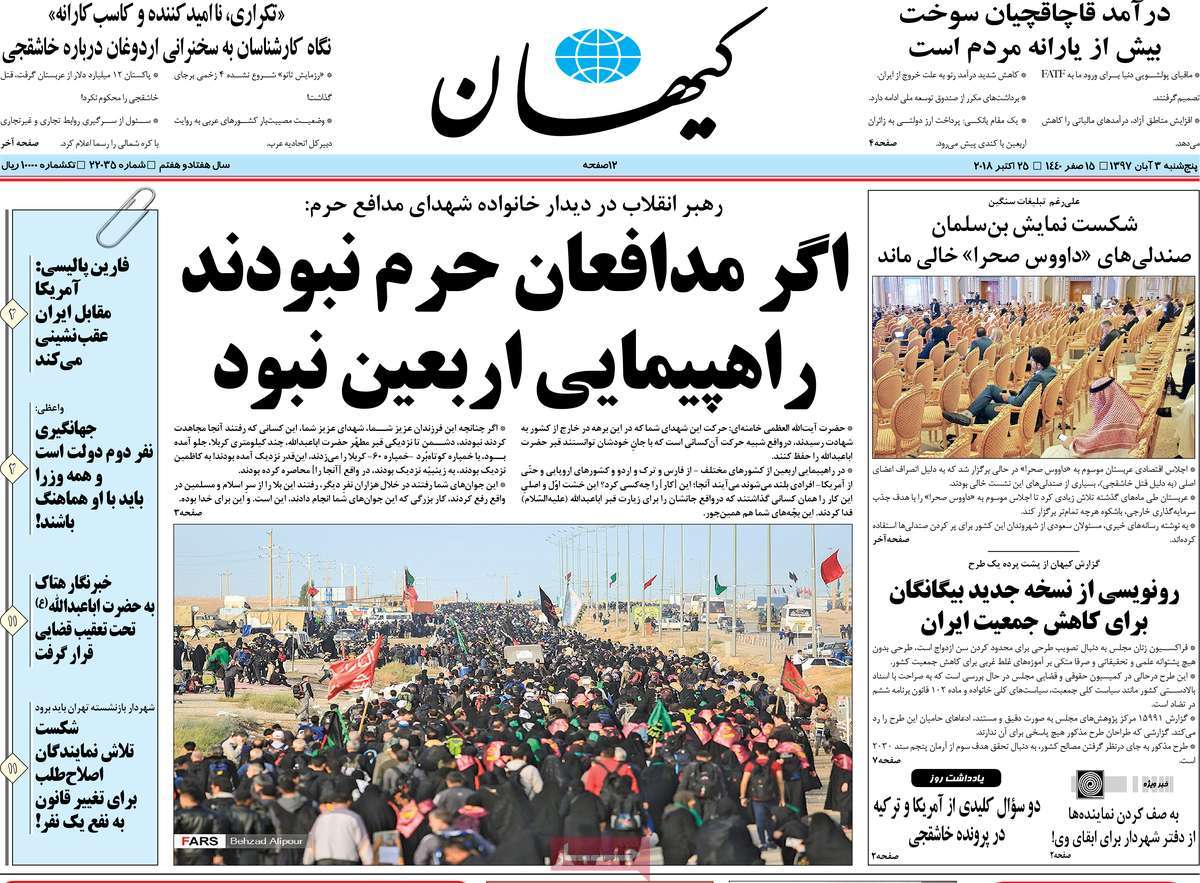 1- Government’s Duty Is to Maintain Value of National Currency

2- Saudis Didn’t Dare to Commit Such a Crime without US Backing: Rouhani 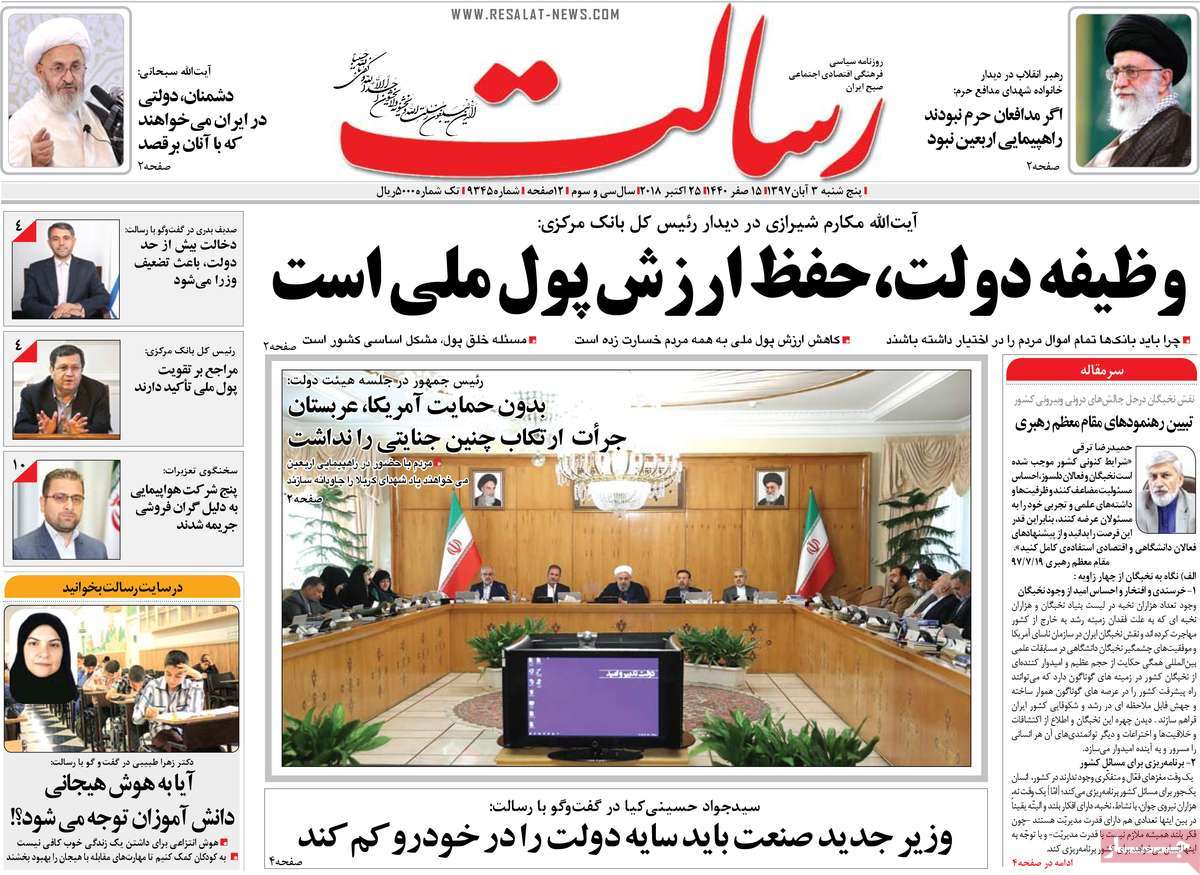 2- Apple to Unveil Its Magical Products Next Week 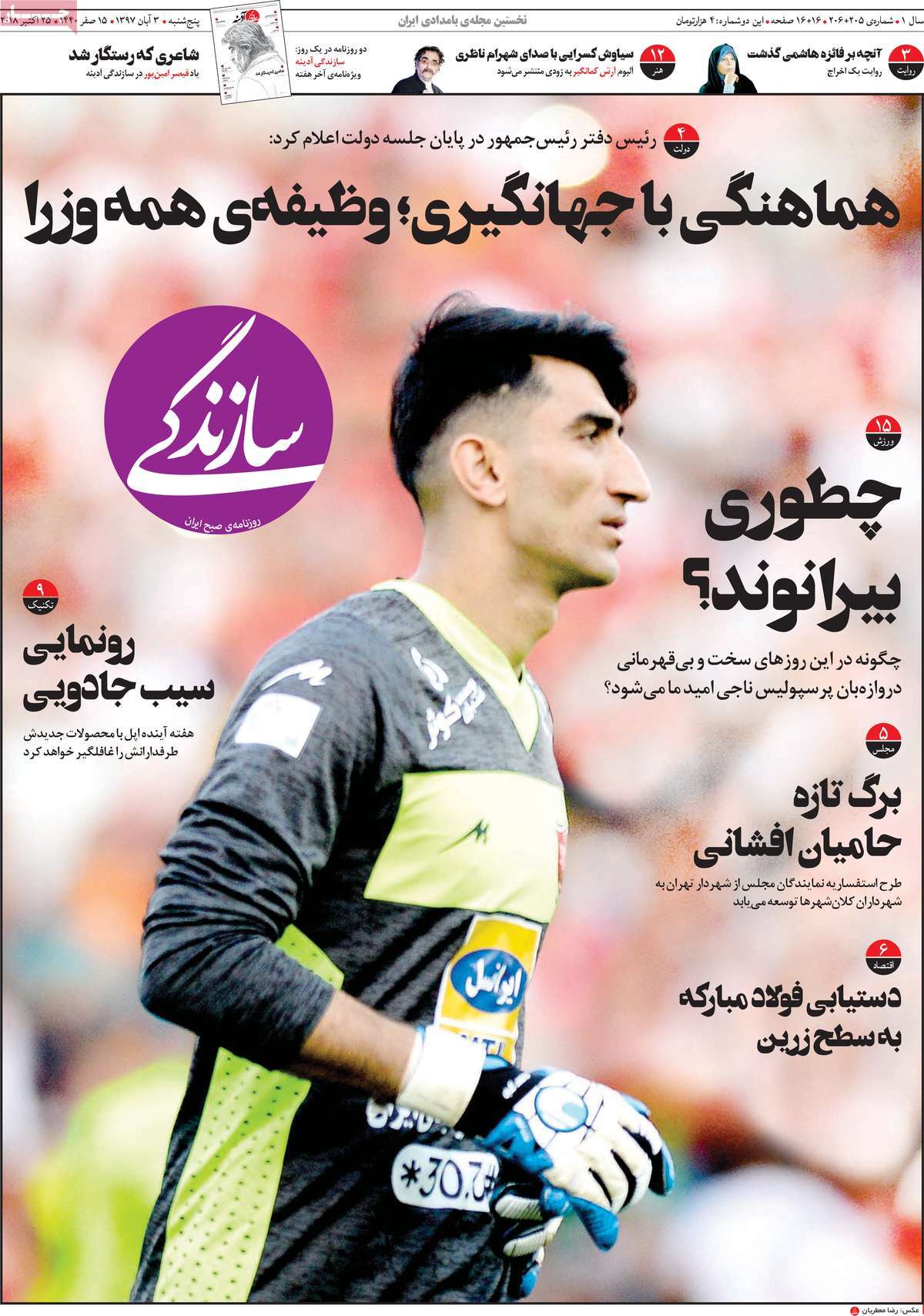 arbaeen, Ayatollah seyyed Ali Khamenei, Khashoggi Murder October 25, 2018
University of Texas endowment to impose new rules for Iran ties
US has to either return to JCPOA or continue to lose credibility