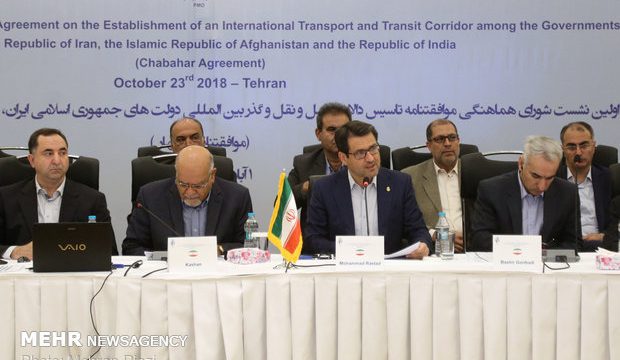 MNA – Iran’s Ports and Maritime Organization (PMO) Managing Director Mohammad Rastad called for modifying and adjusting the transportation and customs tariffs between Iran, India and Afghanistan for the development and promotion of regional transit.

Speaking in the first meeting on the International Transport and Transit Corridor Agreement Among the Governments of Iran, Afghanistan and India (also known as the Chabahar Agreement), Rastad said, “developing and promoting trilateral cooperation in international arena has been cited as one of the main aims behind organizing this meeting.”

Chabahar Agreement plays an important role in development of relationship between the three countries of Iran, India and Afghanistan, he maintained.

Various countries will benefit from launching this corridor, he said, adding, “countries in South Asian regions and Indian subcontinent, Central Asian countries in Caucasus region, Persian Gulf littoral states, Gulf of Oman and Russia will be connected with one another using this corridor, he said, adding, “accordingly, the aforementioned countries can perform their trade and business relationships in the shortest time possible.”

It is expected that the country would witness the growing trend of regional transit from 4th corridor, Rastad reiterated.

With its sea transport coastal area as long as 5,800 km, Islamic Republic of Iran is considered as an important hub for the development and expansion of relations with Caspian Sea and Persian Gulf countries.

He pointed to the development plans of country’s strategic ports and said, “ports of Shahid Rajaee, Imam Khomeini, Bushehr, Chabahar, Anzali and Amirabad are of the most important ports in the country, so that their expansion projects are underway.”

The Deputy Minister of Roads and Urban Development Rastad said that Islamic Republic of Iran commits itself to fully implementation of provisions stipulated in Chabahar Agreement. It is hoped that signing and sealing this agreement will pave suitable ways for the promotion of trade and transit among the aforementioned countries.