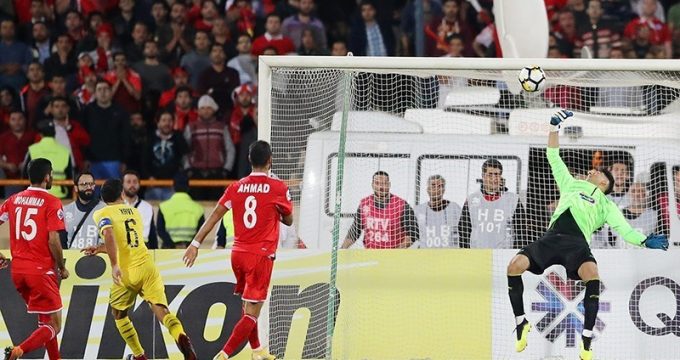 He gained international acclaim back in June when he saved a penalty from Portugal superstar Cristiano Ronaldo on the biggest stage of all: the 2018 FIFA World Cup.

But, on Tuesday, gracing a less-glamorous platform, Alireza Beiranvand arguably produced a greater display that further enhances his status as one of the world’s top goalkeeping prospects.

With a 1-0 lead from the first leg, Persepolis only needed to avoid defeat at the Azadi Stadium on Tuesday to secure a first-ever AFC Champions League final appearance, but found themselves behind after 17 minutes via a clinical finish from Baghdad Bounedjah.

There was little Beiranvand could have done to prevent the tournament’s leading scorer from notching his 13th goal of the campaign; a deadly first-time finish whipped into the bottom corner after the Persepolis had afforded him too much space.

Then, two minutes before halftime, Al Sadd looked certain to score a vital second away goal when Hassan Al-Haidos got in behind the opposition defence, only for Beiranvand to race off his line with lightning-quick speed and deny the Qatar international one-on-one.

Persepolis capitalised on that close shave four minutes into the second half when Siamak Nemati volleyed home a Godwin Mensha cross to put them back ahead on aggregate.

However, with the Qatari visitors coming hard and fast at the hosts as the game in the closing stages, Beiranvand again proved to be the man for the big occasion as he produced an outstanding point-blank range save from Spanish legend Xavi to secure his side’s progress.

Granted, an Asian semi-final does not quite have the same glamour as a World Cup tie against European champions Portugal.

And nothing should be taken away from Beiranvand for keeping out a spot-kick from an icon like Ronaldo, who has won just about everything there is to win in world football.

Nonetheless, most would agree there is still an element of luck in saving a penalty, from the most basic premise of guessing the right direction in the first place.

The general consensus is that penalties are more likely to be scored rather than saved.

Rather, it is from open play where goalkeepers truly prove their ability and worth, and that is exactly what Beiranvand did on Tuesday in front of 81,350 fans.

His first major save – from Al-Haidos – was impressive as it is with the 1.94-metre custodian proving to be as nimble as a smaller man, rushing out of his goal to deny an opponent from a clear-cut opening.

Beiranvand, what a superb performance. Man of the match. Two amazing saves for Persepolis tonight. Saves that made the difference for sure. That one from Xavi was world class

The one to stop a player of Xavi’s stature from scoring a goal which would have surely eliminated Persepolis and send Al Sadd through, with just four minutes left on the clock, was sheer brilliance.

To be fair, Beiranvand is far from the finished article.

Even in the Champions League this season, there have been instances where he has shown vulnerability but, at 26, he still has plenty of room for improvement.

One of his most-impressive attributes, which is also something that cannot be coached, is his proclivity to play at his best when it really matters.

Used to work as a shepherd with his family.

Ran away from home

Worked in a pizza shop

Homeless at one stage.

Worked as a street cleaner.

Yesterday he saved a penalty from Cristiano Ronaldo at the #WorldCup

Following his heroics for Iran at the World Cup, there was reportedly no shortage of offers from overseas for his services.

“After the World Cup we lost four or five good players and because of our transfer ban we couldn’t bring anyone in,” Beiranvand said on the Asian Football Confederation’s official website, in an interview done prior to Tuesday’s game.

“I had won the domestic championship for the past two years, but I felt I owed it to Persepolis to stay here for the AFC Champions League because I didn’t want to leave the club in a difficult situation.”

It may not yet be on par with European football the pinnacle of Asian football is now within reach for Beiranvand and Persepolis, who will meet either Suwon Samsung Bluewings or Kashima Antlers in the two-legged final on November 3 and 10.

One gets the feeling it is only a matter of time before Beiranvand takes up one of his many suitors on their offer of playing abroad.

For now, the Champions League can look forward to being graced by one of the continent’s best goalkeepers for at least another two games.

Two games that are befitting of the man for the big occasion as he looks to hand Persepolis their maiden Champions League title.