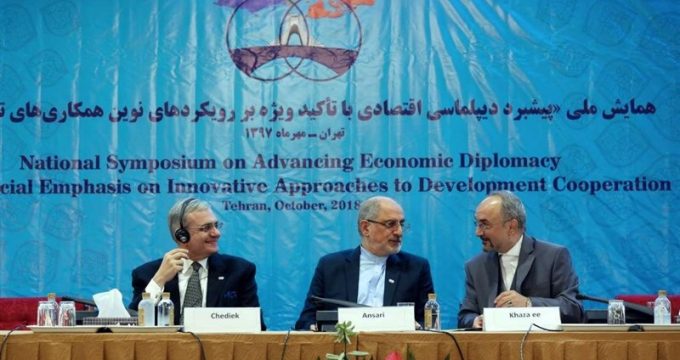 Tasnim – Tehran played host to a national conference of “New Methods for Advancing Economic Diplomacy with Emphasis on Development Cooperation”.

According to the Foreign Ministry’s website, the conference was held on October 21 at the Office of the Institute for Political and International Studies.

The event was organized by the Foreign Ministry’s Department for Economic Diplomacy in collaboration with the United Nations Office for South-South Cooperation.

Several foreign agencies working in the field of international cooperation attended the conference.

The gathering opened with speeches by Gholamreza Ansari, Iran’s deputy foreign minister for economic affairs, Jorge Chediek, director of the United Nations Office for South-South Cooperation, and Mohammad Khazaei, a deputy finance minister and the head of Organization for the Investment, Economic and Technical Assistance of Iran.

More than 300 senior executives from various Iranian ministries and departments as well as Tehran-based ambassadors and diplomats attended the event.

The conference was aimed at explaining new methods in the field of international cooperation, especially in economic diplomacy.

South-South cooperation, as one of the models of development, was also a major issue discussed in the conference.

Representatives from a number of domestic organizations such as Education Ministry, the Iranian Red Crescent Society (IRCS), the Department of Environment, and the Nanotechnology Headquarters also elaborated on their plans and achievements.

At the conclusion of the conference, Iranian Foreign Ministry official Ahmad Massoumifar outlined the high capacities of Iran in the field of development cooperation, and called for the recognition of all aspects of this component in foreign policy.

The official also highlighted the significance of development cooperation in international and bilateral relations, development of national policies, coordination and synergy of all the institutions of the country, and the use of smart and innovative methods in this area.

He also called on the country’s scientific and academic institutions to carry out integrated studies on development cooperation and help the foreign ministry and other relevant bodies in this field.