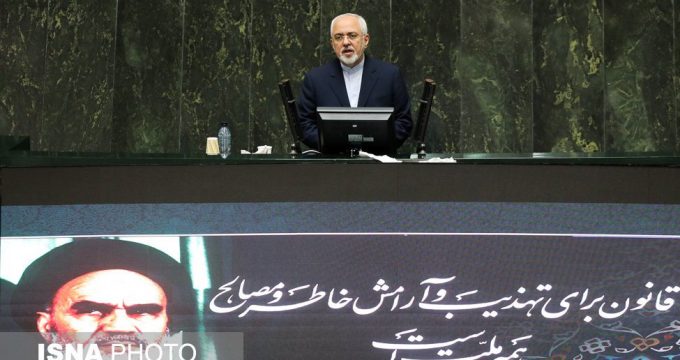 Zarif due in parliament to discuss Iran’s accession to CFT

The presiding board of the parliament decided Sunday to hold a closed session on Tuesday with Zarif and Deputy Foreign Minister for Political Affairs Seyed Abbas Araqchi in attendance.

During the meeting, the diplomats as well as the chairman of the parliament’s National Security and Foreign Policy Commission will explain their viewpoints about the Islamic Republic’s accession to the CFT.

Back on October 7, the Iranian Parliament approved a bill on the country’s accession to the CFT treaty.

According to the Financial Action Task Force, Iran had until October to complete reforms that would “bring it into line with global norms or face consequences” that could further deter investors from the country.

To fulfill FATF requirements, President Hassan Rouhani’s administration has proposed four bills to the parliament for approval, two of which are still undecided, including the Palermo Convention.

On June 10, the Iranian parliament passed a law allowing the country to join the United Nations Convention against Transnational Organized Crime (UNTOC), but has decided to put on hold debates on accession to the Financial Action Task Force (FATF) for two months.

The FATF on Friday gave Iran four months to implement its commitments after a meeting of its members in Paris.

The international body announced it would continue suspending counter-measures, which can go as far as limiting or even banning transactions with a country.