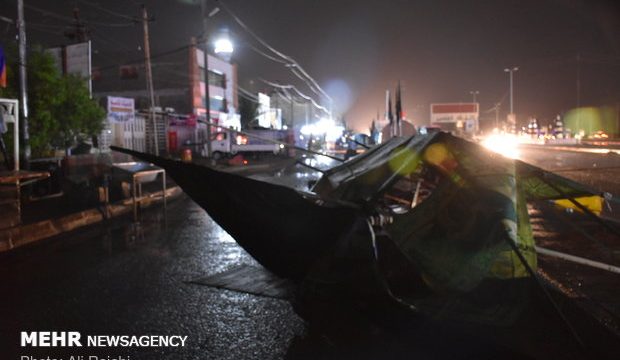 MNA – A storm has hit the western border areas with Iraq, forcing the Arbaeen pilgrims heading towards Iraq to redirect their ways.

The Head of Arbaeen Headquarters Shahriar Heidari has just announced a storm with 75 km/h winds has swept away the border areas with Iraq, especially in the western city of Mehran, disrupting caravans of Arbaeen piligrims who are heading towards Iraqi holy city of Karbala, where the Arbaeen religious ceremony is held every year, attended by millions of Shia pilgrims from Iran and other neighboring countries.

Heidari added that all the facilities are prepared in the city of Mehran, in Ilam province, to help the pilgrims and accommodate them.

He said that the storm will likely continue until tomorrow afternoon, so he urged the pilgrims to go towards the southern borders to be safe.

According to the another Iranian official at Arbaeen Headquarters, strong winds and heavy rain at Mehran border has created a lot of problem for the organizers and Arbaeen pilgrims, forcing Mehran Internationl border crossing to shut down for the time being.