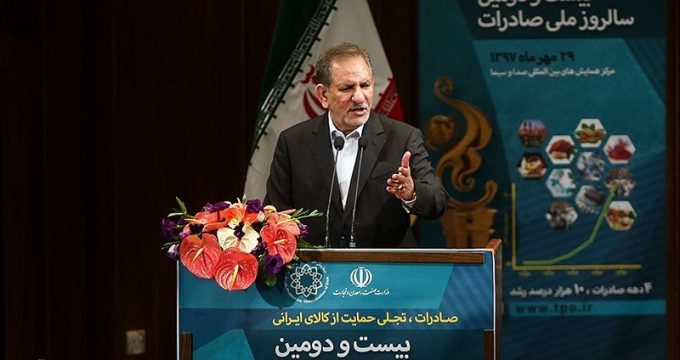 “$500 million will be withdrawn from the National Development Fund, and exchanged into rial to support domestic pharmaceutical companies. Leader approved the measure last week, and there’s no problem,” said Iranian Vice-President Es’hagh Jahangiri at a ceremony marking the National Export Day on Sunday.

Talking about the US’ withdrawal from the Iran nuclear deal and the re-imposition of economic sanctions, Jahangiri said the second batch of sanctions, although not due until Nov. 5, seems to have already affected the oil, banking and transport indicators, which make the country’s main sources of revenue.

“A number of countries have already yielded to Trump’s [pressure] and stopped buying our oil, but we haven’t been sitting around, doing nothing about it. We have found workarounds to export our oil against US’ wishes,” stressed Jahangiri.

Jahangiri had previously said that Iran had found new clients for its oil, adding that negotiations had also been held with old clients to find ways around the sanctions. He had also maintained that even if sanctions cut Iran’s oil sales by half, the country would be still economically safe because it is selling its crude oil higher than the price tag it has set in its annual budget plan.