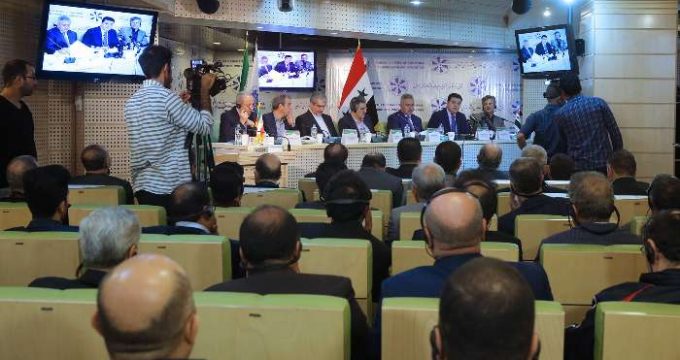 The discussion was during a meeting between a delegation of Syrian businessmen, headed by Secretary General of the Federation of Syrian Chambers of Commerce Mohammad Hamshou and the Adviser to First Vice-President of the Islamic Republic of Iran and Chairman of the Iranian Committee on the development of economic relations with Syria and Iraq Hassan Danaiefar, and Chairman of Iran Chamber of Commerce, Industries, Mines and Agriculture Masoud Khansari.

Hamshou and Khansari affirmed both sides’ determination to work on upgrading the level of economic, trade and investment relations to reach the level of the distinguished political relations between the two countries.

They also called for overcoming all obstacles facing the joint cooperation and establishing productive and trade partnerships in all sectors.

Hamshou and Secretary General of Tehran Chamber of Commerce Bahman Eshghi signed a memo of understanding on cooperation between the two sides in different trade, investment, economic and production domains.

Earlier, Hamshou and Khansari opened the Syrian-Iranian Businessmen Forum with the participation of representatives of the private sector in both countries with the aim of developing trade relations and economic cooperation in different spheres.

The Forum aimed at upgrading the level of economic, trade and investment cooperation between businessmen in Syria and Iran to establish partnerships in all sectors to meet the requirements of the upcoming stage, particularly the reconstruction process in Syria.

The Forum also contributed to exchanging expertise and introducing the investment projects which serve the development process in the two countries, in addition to setting a framework for overcoming the obstacles facing the cooperation process and encouraging the Iranian companies to participate in the reconstruction in Syria.