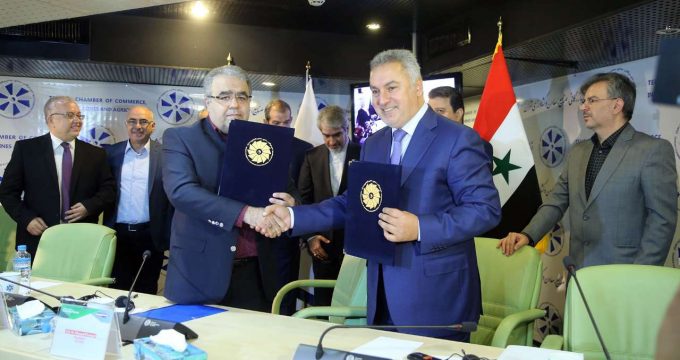 October 21, The Iran Project – A joint Iran-Syria business forum held in Iranian capital of Tehran – for the first time after over a decade hiatus due to war in the Arab country – to discuss mechanisms of strategic cooperation in economic, trade and investment domains.

The Syrian delegation, comprising 50 businessmen representing different economic, trade and investment activities and the private sector, was headed by Secretary General of the Federation of Syrian Chambers of Commerce Mohammad Hamshou. Also, the Iranian side was chaired by the Advisor to First Vice-President of the Islamic Republic of Iran and Chairman of the Iranian Committee on the development of economic relations with Syria and Iraq Hassan Danaiefar, and Chairman of Iran Chamber of Commerce, Industries, Mines and Agriculture Masoud Khansari.

Hamshou and Khansari affirmed both sides’ determination to work on upgrading the level of economic, trade and investment relations to reach the level of the distinguished political relations between the two countries.

They also called for overcoming all obstacles facing the joint cooperation and establishing productive and trade partnerships in all sectors.

Meanwhile, a memorandum of understanding (MoU) was signed between the two sides in different trade, investment, economic and production domains.

Addressing the forum, Masoud Khansari mentioned the good political relations between the two countries and criticized the mismatch between the level of economic ties and political ones.

He further voiced Iranian companies and private sector’s readiness for cooperation with their Syrian counterparts in reconstruction of Syria noting that Iran is going to have a significant role in Syria’s future markets.

Speaking to the forum, Iranian Ambassador to Damascus Javad Torkabadi said that, “We can create a powerful economic region through our strong bonds and God willing, we will soon witness a wider presence in each other’s capitals.”

He stressed vast grounds for economic activities in Syria, and said, “These grounds would provide high opportunities for the Iranian sides and reconstruction of Syria.”

Giving speech at the forum, Adnan Hassan Mahmood, Ambassador of Syria to Tehran stated that his country will keep its doors open for Iran’s investment in various fields, including setting up free trade zones in the country.

Mahmood said that ally countries like Iran that stood with Syria during the fight against terrorism will take part in Syria’s reconstruction while the countries which supported terrorists and destroyed the country’s economy will stay out of Syria.

At the end of the event, Hassan Danaiefar underlined the need for drawing a roadmap for addressing issues and problems in the way of trade between the two countries, saying that “there are many areas for economic cooperation like air and road transport, aviation, insurance, agriculture, industry and etc.”

He voiced Iran’s readiness for mutual cooperation in all such fields suggesting to use the two countries’ national currencies in trade.

Danaiefar further mentioned establishing joint banks and joint ventures as well as the Iran-Syria joint chamber of commerce as steps which should be taken in order to reach a desired trade level.

The Forum contributed to exchanging expertise and introducing the investment projects which serve the development process in the two countries, in addition to setting a framework for overcoming the obstacles facing the cooperation process and encouraging the Iranian companies to participate in the reconstruction in Syria.