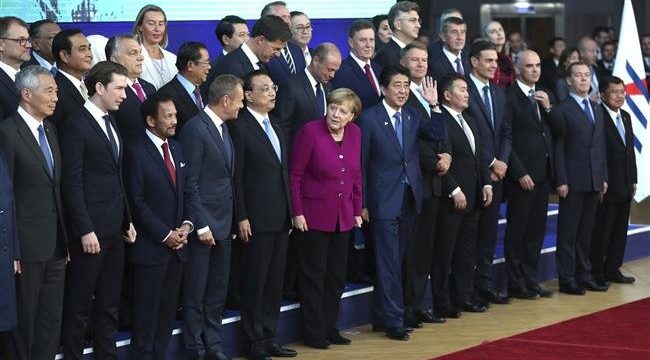 October 21, The Iran Project – Since President Donald Trump has unilaterally withdrawn the US from the Joint Comprehensive Plan of Action (JCPOA) on May 8, and announced the re-imposition of sanctions against Iran, most world leaders – except heads of certain states – have been trying to preserve the 2015 accord.

Many Iranian, Foreign officials along with senior experts believe that following Trump’s reckless and unjustified move, the priority should be to salvage the JCPOA (official abbreviation for Iran nuclear deal) without the US, and avoid the unwelcome prospect of a renewed nuclear crisis in a Middle East already in turmoil.

It is important to note that despite the US withdrawal, other signatories, including Russia, China, France, Germany, and the UK confirmed their commitment to the nuclear deal.

Speaking to reporters, Russian Foreign Ministry spokeswoman, Maria Zakharova, has said the US’ measures against Iran nuclear deal are in violation of the international regulations.

Russia believes that the JCPOA is not just related to politics but it includes economic and global stability and international relations, she stressed, adding, “The US is taking destructive measures against international community, which are in contrast with international regulations and the UNSC resolutions.”

European Union Foreign Policy Chief Federica Mogherini said, on Thursday evening, that the 28-member block is “working on the concert establishment” of its plan to set up a way to preserve business with Iran and avoid renewed US sanctions.

“This (the payment system) is something that we have presented during the (United Nations) General Assembly ministerial week in New York. The Member States of the European Union have decided to put this system in place, so they are now working on the concrete establishment of this. I am confident that they will continue this work in a successful manner in the coming weeks,” the EU’s official website reported.

“I have to say that our partners from Asia have always shown a lot of interest in working to keep the full implementation of the JCPOA (Joint Comprehensive Plan of Action); obviously for security reasons that also concern Asia and Central Asia,” she reiterated.

The participants of the 12th Asia–Europe Meeting (ASEM) have reaffirmed their collective support for the JCPOA, noting that the lifting of sanctions against Tehran is an essential part of the agreement, the ASEM chair’s statement released on Friday (Oct. 19) said.

“With regard to Iran, Leaders reiterated their collective support for diplomatic dialogue and the Joint Comprehensive Plan of Action… Leaders recognized that, alongside full and effective implementation by Iran of its nuclear-related commitments, the lifting of sanctions including the consequences arising from it constitutes an essential part of the JCPOA. Preserving the nuclear deal with Iran is a matter of respecting international agreements, and promoting international security, peace, and stability,” the ASEM chair’s statement read.

In an interview with IRNA, Tariq Rauf, a Vienna-based Canadian Consultant on nuclear governance matters, has stated the JCPOA is the world’s most successful and most effective nuclear verification agreement after the International Atomic Energy Agency (IAEA) safeguards.

Tariq Rauf was of the view that people regard the decision by one country to leave the JCPOA to be a very damaging move and people are actually quite supportive of the three European countries to try and keep the JCPOA going as apparently Russia and China are doing as well.

Former Senior Advisor to the Chair of the Disarmament Committee at the 2015 Non-Proliferation Treaty (NPT) Review Conference added that it is in Iran’s interest to continue to implement the JCPOA.

It is worth mentioning that Iran’s compliance with its JCPOA obligations has been verified repeatedly by the UN nuclear agency conducting the most rigorous inspection regime ever negotiated. But these factors seemingly did nothing to dissuade President Trump from exiting an agreement he has had in his crosshairs since taking office in January 2017.