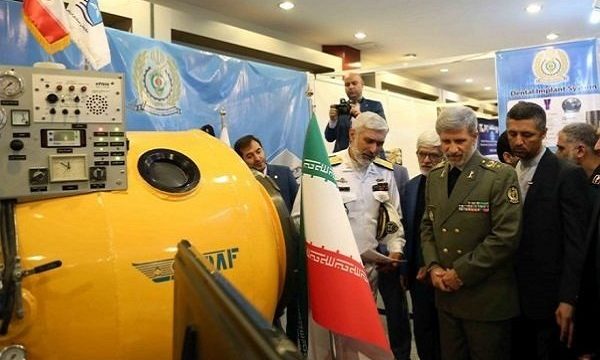 MNA – Minister of Defense (MoD) Brigadier General Amir Hatami said that salient achievements of the maritime industries of the Armed Forces of the Islamic Republic of Iran will be introduced in near future.

He made the above remark in his visit to Mashhad Defense Industries Exhibition, and said, “in maritime sector, Islamic Republic of Iran has managed to take fundamental and significant steps in equipping naval force of Army, IRGC and Law Enforcement Forces, so that we will soon witness introduction of giant achievements in this field.”

In his two-day visit to Mashhad, the defense minister was briefed on the process of productions and interactions with the Armed Forces of the Islamic Republic of Iran as well as relevant projects and contracts.

Given the high capabilities and potentials of the country in relevant fields, he called on experts in the defense industry to take effective steps, relying upon their aboriginal knowhow and knowledge, in line with materializing objectives of the Armed Forces in the shortest time possible.

He assessed the defense industry exhibition held in holy city of Mashhad ‘excellent’ and said, “in spite of expert, the most experienced, committed and motivated manpower in maritime and aerospace industries of the country, we managed to provide a highly valuable technological services to the Armed Forces.”

Given the above issue, Mashhad is considered as one of the main hubs of the defense industry in the nationwide, he maintained.

In conclusion, the Minister of Defense Amir Hatami termed salient achievements taken in the country in the defense, air and aerospace industries as ‘outstanding and significant’ and said, “despite cruel sanctions imposed on Iran, experts and scientists of the Ministry of Defense have managed to conquer the borders of science and knowledge and attained valuable achievements, the most important of which is manufacturing Kosar fighter jet.