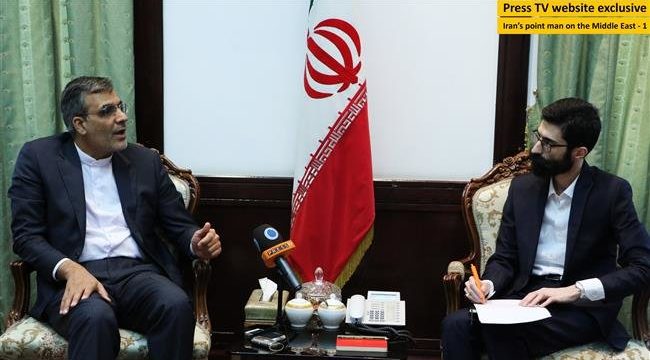 Press TV – All those armed Syrian oppositionists who have joined the peace process for their country and have renounced violence are part of the solution to the Syrian crisis and “shall be” discriminated from terrorist groups, Iran’s chief negotiator for Syria says.

Hossein Jaberi Ansari, a top aide to Iranian Foreign Minister Mohammad Javad Zarif, said in an exclusive interview with Press TV’s English-language website on Wednesday, October 10, that, while any form of armed opposition to an elected government is technically and universally defined as terrorism, those armed Syrians who have joined the peace process for Syria after more than seven and a half years of war could now be considered non-terrorists regardless of their opposition to Damascus.

The Syrian government and its state media sweepingly refer to all armed government opponents as “terrorists.” Jaberi Ansari said that that manner of reference is “natural” from the technical perspective but he also said that the case of Syria was an exceptional one.

“That the Syrian government considers all those who have taken up arms outlaws is a natural thing from one perspective,” the Iranian official said. “But from another, we believe that all armed groups that have joined the peace process and accepted the framework of the Astana agreements are in fact part of the solution [to the Syrian conflict] and shall be differentiated from terrorist groups.”

He was referring to the peace process launched jointly by Iran, Russia, and Turkey in the Kazakh capital of Astana in January 2017. A parallel peace process, on the auspices of the United Nations (UN) and known as the Geneva process, has been underway in the Swiss city for much longer but with far lesser results.

Jaberi Ansari explained that in Syria’s case, groups that took up arms “mistakenly,” and as a “tactic” and not a “strategy,” but later accepted “the logic of return to normal conditions” were being negotiated with in Astana.

“Given Syria’s special situation, and that the opposition has, for good or for bad, believed that because of the specific political conditions of the country and ‘closed and uncompromising political structures,’ peaceful political opposition has not been possible the way it should have, we are faced with an… exceptional case.”

He said despite the complexities of the job, Iran, Russia, and Turkey were being particularly nuanced in the Astana literature and were taking care to differentiate between the armed groups described above and other violent outfits.

Opening a pathway back to peace

That is being done with the goal of providing an opportunity for those groups to return to peaceful manners of opposition and to pave the way for peace, he said.

The Iranian official said that further obstructing the return of those groups will mean continued crisis, confrontation, and security issues.

“Even once the Syrian government retakes control of the entire Syria, these [groups] will go underground in the form of terrorist sleeper cells and will carry out terrorist attacks here and there.”

Conflict erupted in Syria back in 2011, when a small group of opposition forces took up arms against Damascus. Soon, however, a mixture of international terrorists and paid mercenaries mingled with and then largely sidestepped the armed Syrian opposition groups, effectively turning the Arab country into a battlefield for foreign governments opposed to Syrian President Bashar al-Assad.

In order to separate themselves from internationally-recognized terrorist groups such as al-Qaeda, Daesh, and their affiliates, those groups that have joined the Astana peace process should take a number of steps, Jaberi Ansari said.

They have to explicitly declare they are not extensions of those internationally-designated terror outfits, have no organizational links to them, are not following their agenda, and are committed to the Astana process, he explained.

He said some groups have already committed themselves to the Astana process and officially signed up on its agreements.

Other armed individuals who, conversely, insist on violence will be part of the problem, Jaberi Ansari warned.

He also made it clear that those armed individuals who are resorting to terror and who are not Syrian but hail from other countries cannot be part of any solution for peace and “should be dealt with in some other way.”

The Iranian official said the fact that official Syrian government delegates sit around the same negotiating table as those armed groups that have joined the peace process means Damascus, too, has “de facto, if not de jure,” accepted the differentiations made between various armed groups.

He said Syrian statesmen, more than anyone else, feel the necessity to resolve matters because they are the ones on the forefront of the crisis.

But he did seem to have some reservations there.

“The rug has to be pulled out from under the foreign actors who seek to destabilize Syria and to turn it into a failed state…, and the Syrian government’s attention [toward nuances] will be of more influence than anyone else’s in making that happen.”