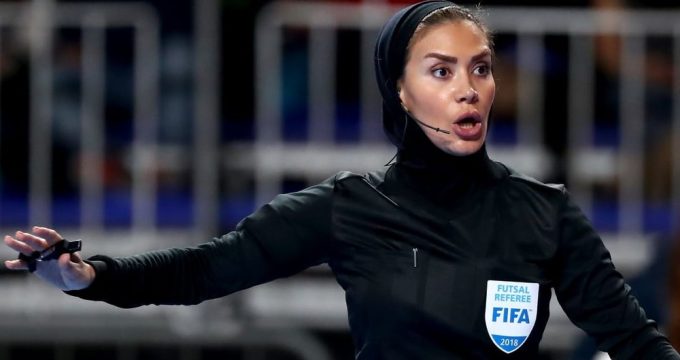 I am women refereeing pioneer in Iran: Gelareh Nazemi

Nazemi has been selected to referee the final of the Youth Olympics Women’s Futsal Tournament Buenos Aires 2018 between Portugal and Japan, which takes place on Wednesday in the Main Futsal Hall.

FIFA.com chatted with the Iranian 34-year-old official to find out a little more about her career path, covering topics such as choosing futsal over football and her situation today, where she is one of many female referees working under the auspices of the Football Federation Islamic Republic of Iran.

“It’s a very important assignment: the best referees from each country are here and the level of competition is very high. I’m happy,” said Nazemi.

“About 15 years back, I was playing football in Iran when my brother, who was a referee in the SuperLiga, urged me to give it a try. He said, ‘You can do it, you can be one of the first’. In Iran, the first group of female referees only got started 15 years ago.”

Nazemi elaborated on her decision of choosing futsal over football and how the sport has shaped her career.

“Because futsal in Iran is played to a really high standard, higher than football. To start off with, I refereed football matches, but it wasn’t enough for me. In futsal, we’re the number one team in the AFC; it’s a very good level. It was a way of improving – futsal enabled me to develop my refereeing.”

“At the beginning it was hard, but just like in any other country, if you want something enough, you can do it. People have often said that women aren’t good referees. But in order to stick with my decision, it was important to me to tell them and show them that I could do it. I used it as a motivating tool. And my brother and family were very supportive. That was very important.

“I do see myself like a pioneer – and the other female referees back home – in that way, yes. There are a lot of them who are keen to develop. When I was called up to this tournament, perhaps at the beginning it wasn’t looked upon as a positive thing. But after this appointment, and others within the AFC, my countrymen saw the progress I was making and accepted it. Now they believe in me and trust me,” Nazemi concluded.