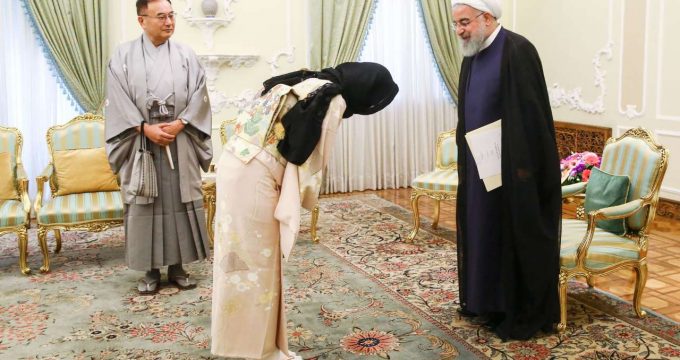 October 17, The Iran Project – Iran’s President Hassan Rouhani has received the new ambassadors of some countries on Tuesday (Oct. 16), including ambassadors of Japan, South Africa and Belgium.

President Rouhani at separate meetings with the ambassadors stressed boost of cooperation with the countries on the basis of the shared values and commonalities.

Speaking in a meeting with the new Japanese Ambassador to Tehran Mitsugu Saito, Rouhani said, “Long-standing Iran-Japan relations have always been friendly and the two nations have special respect for each other”.

Referring to the necessity of all countries’ efforts to preserve the JCPOA as an international agreement, Rouhani stated, “The more countries distances themselves from the unreasonable demands of American statesmen, the more the JCPOA and diplomacy will be strengthened”.

The president also touched upon the issuance of the ICJ’s ruling in favor of Iran over the Joint Comprehensive Plan of Action (JCPOA) and said, “Despite the US withdrawal, the Islamic Republic of Iran continues to comply with its obligations under this agreement, and we will adhere to it until it is in the framework of our national interests”.

Submitting his credential to the President, Saito reiterated, “The Japanese Emperor and government are willing to develop amicable Tehran-Tokyo relations and cooperation”.

Referring to the historical, friendly relations of the two countries in various fields, he stated, “Despite the US pressures and sanctions, the Japanese government and companies continue to maintain relations with Iran and they will stay in Iran, because Japanese traders and officials trust in the future of Iran”.

During a meeting with the new South African Ambassador to Tehran Vika Mazwi Khumalo, President Rouhani noted, “In addition to the bilateral ties, the two countries have supported each other in international stages and we hope that we can further develop our relations in cultural, political and economic fields”.

He then stressed the importance of deepening financial and banking relations between the two countries and expressed hope to witness further developments in these fields.

New South African Ambassador to Tehran Vika Mazwi Khumalo presented his letter of credence to Rouhani and said, “We are determined to deepen our relations and cooperation with Iran, as stressed by Nelson Mandela”.

He also referred to the ruling of The Hague in favor of Iran and said, “South Africa always supports the Islamic Republic of Iran’s stances in international communities”.

Upon receiving the credentials of Petit, the new ambassador of Belgium to Iran, the Iranian president said “‘Iran-Belgium ties are good and long-standing and there are no obstacles on the way of strengthening Tehran-Brussels relations.”

President Rouhani described as ‘strong’ the European Union’s political stance on the 2015 Iran nuclear deal, known officially as the Joint Comprehensive Plan of Action (JCPOA), and expressed hope that the European Union will take positive steps in developing economic cooperation.

The Belgium envoy, for his part, said Tehran-Brussels relations have been widely expanded in all areas, especially in the economic domain, and the two countries will mark the 100th anniversary of bilateral relations in 2020.

She described the JCPOA as a major international accomplishment, saying the EU and Belgium are making every effort to keep the deal.