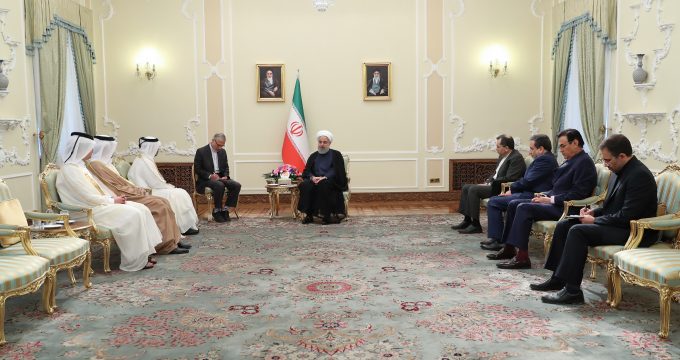 The Iranian President at separate meetings with the ambassadors stressed boost of cooperation with the countries on the basis of mutual respect and interests.

In a meeting with Qatar’s new Ambassador to Tehran Mohammed bin Hamad Al Hajri, President Rouhani has said the Islamic Republic demands the establishment of complete security and peace in the sensitive Persian Gulf region.

He noted that Qatari officials are prudently managing the country’s affairs, stressing that “no one has the right to make decisions for the Qatari people and government.”

He went on to say that the two countries have close stance on many regional issues but must further promote mutual bonds.

The Qatari ambassador, who submitted his credentials to the Iranian president, said Doha would make serious efforts to promote relations with Tehran to serve the two nations’ interests.

Speaking to the new Dutch Ambassador to Tehran Jacques Werner, President Hassan Rouhani said, “I am confident that with bilateral cooperation, we can further deepen relations between the two countries in all fields, especially economy and banking”.

He also welcomed the political stances of the Netherlands and the European Union towards the Joint Comprehensive Plan of Action (JCPOA), noting, “We all should work hard to safeguard this important, international agreement”.

Touching upon the recent terrorist attack in Ahwaz city in southern Iran, Rouhani stated, “Unfortunately those who claimed responsibility for this attack live in Europe, and we hope that European countries carry out the necessary measures in this regard”.

Submitting his letter of credence to the President, Werner said, “The government of the Netherlands fully supports the nuclear deal’s implementation”.

He went on to add that, “I assure you that the Netherlands is seeking to further consolidate economic relations with Iran, and in this regard we have asked our trade and commerce community to have an active presence in Iran”.

“We will also be active in prosecuting the perpetrators of the Ahwaz terrorist attack, who are in Europe,” the Dutch envoy concluded.

In a meeting with the new Senegalese Ambassador Amadou Sow to receive his credentials, President Rouhani said deepening relations with Senegal, as a friendly Muslim country, has always been important for Iran.

He stressed the importance of collective campaign against terrorism in Africa and the Middle East and added, “Iran is ready to develop its relations with Senegal in fighting terrorism”.

New Ambassador of Senegal to Tehran presented his credentials to the President and said that Senegal was determined to cement ties with Iran in all fields of mutual interest, especially economy.

During a separate meeting with Bosnia and Herzegovina new ambassador to Tehran Samir Veladžić, Rouhani said Iran is ready to promote relations with Sarajevo in political, trade and cultural fields.

He also underlined attempts to reinforce ties with Iran in the trade and economic fields.

Also on Tuesday, the Iranian president received the credentials of ambassadors of Japan, South Africa and Belgium.