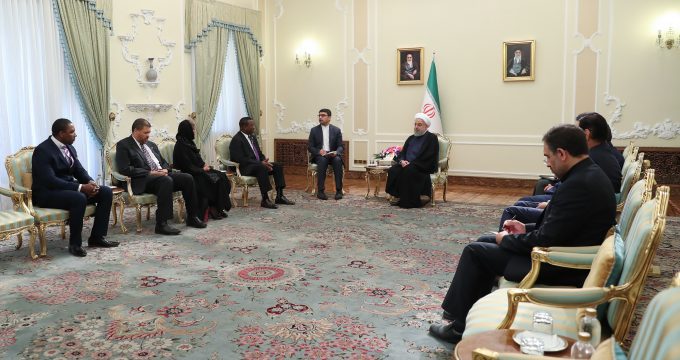 Iran, South Africa’s economic potentials can supplement each other: President

president.ir – Stressing that the Islamic Republic of Iran considers South Africa as its close friend, President said, “With regard to the closeness of the two nations, we are willing to establish closer ties with the popular and democratic government of South Africa”.

Speaking on Tuesday in a meeting with the new South African Ambassador to Tehran Vika Mazwi Khumalo, President Hassan Rouhani said, “In addition to the bilateral ties, the two countries have supported each other in international stages and we hope that we can further develop our relations in cultural, political and economic fields”.

“The Islamic Republic of Iran and South Africa have very good potentials and their economies can supplement each other,” he continued.

He also said, “Iran’s previous regime had close ties with the Apartheid government in oil, economy and mines and after the victory of the Islamic Revolution, we cut all our relations with South Africa to help its people fight the Apartheid”.

He also stressed the importance of deepening financial and banking relations between the two countries and expressed hope to witness further developments in these fields.

New South African Ambassador to Tehran Vika Mazwi Khumalo presented his letter of credence to the President and said, “We are determined to deepen our relations and cooperation with Iran, as stressed by Nelson Mandela”.

He also referred to the ruling of The Hague in favour of Iran and said, “South Africa always supports the Islamic Republic of Iran’s stances in international communities”.

“We are determined to develop our economic cooperation and relations with Iran,” he continued.

Hassan Rouhani, Iran-South Africa ties, Vika Mazwi Khumalo October 16, 2018
President in a meeting with new Amb. of the Netherlands to Tehran: I hope ICJ’s interim ruling prevents US’ illegal acts
Iran’s vision for Iraqi market on track despite US sanctions