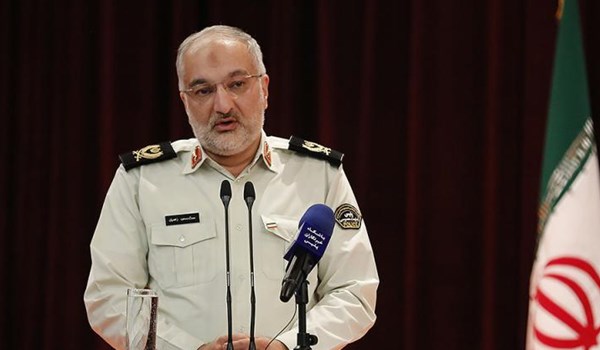 Police chief: US sanctions against Iran to increase drug trafficking to Europe

FNA – Iran’s Anti-Narcotics Police Chief Brigadier General Mohammad Massoud Zahedian warned that the US sanctions on equipment needed to fight against drug traffickers can slow down Iran’s effective efforts to this end and increase the traffic of narcotics to Europe.

“We should buy these equipment and they are needed. The sanctions include all equipment and we hope that this will not happen because we will possibly face problem in discovering drugs and (then) they (the European governments) should collect kilos of narcotics from Europe with difficulty,” General Zahedian told reporters in Tehran on Monday.

He added that the Iranian anti-narcotics squads have discovered and seized 403 tons of different types of narcotics since the start of the new Iranian year (March 21).

General Zahedian warned of the soaring grow of production of drugs in Afghanistan, and said the country produced 185 tons of narcotics in 2001 while the number has increased to 9,000 tons today which shows that the western states’ war and military presence in Afghanistan has not been effective and even played a role in accelerating drug production.

Pakistan and Afghanistan are two origins of producing and trafficking of various types of narcotic in the region.

The anti-drug squads of the Iranian Law Enforcement Police have intensified their countrywide campaign against drug-trafficking through staging long-term systematic operations since 2010.

The Iranian anti-narcotic police have always staged periodic, but short-term, operations against drug traffickers and dealers, but the latest reports – which among others indicate an improved and systematic dissemination of information – reveal that the world’s most forefront and dedicated anti-narcotic force (as UN drug-campaign assessments put it) has embarked on a long-term countrywide plan to crack down on the drug trade since 7 years ago.