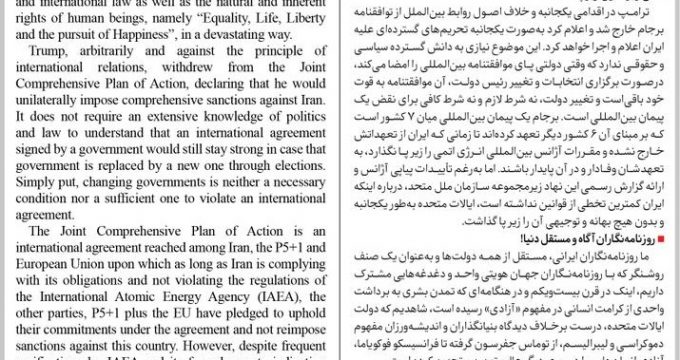 In Defense of Freedom: Iranian dailies urge Western counterparts to protest US sanctions

We hold these truths to be self-evident, that all men are created equal, that they are endowed by their Creator with certain unalienable Rights, that among these are Life, Liberty and the pursuit of Happiness…”

Just twelve scores and two years after Thomas Jefferson wrote this statement down at  the very beginning of the United States Declaration of Independence and then in the US Constitution as well, on 8th of May, 2018 and in front of the eyes of billions of peoples all around the world, President Donald Trump trampled over the US constitution and international law as well as the natural and inherent rights of human beings, namely “Equality, Life, Liberty and the pursuit of Happiness”, in a devastating way.

Trump, arbitrarily and against the principle of international relations, withdrew from the Joint Comprehensive Plan of Action, declaring that he would unilaterally impose comprehensive sanctions against Iran. It does not require an extensive knowledge of politics and law to understand that an international agreement signed by a government would still stay strong in case that government is replaced by a new one through elections. Simply put, changing governments is neither a necessary condition nor a sufficient one to violate an international agreement.

The Joint Comprehensive Plan of Action is an international agreement reached among Iran, the P5+1 and European Union upon which as long as Iran is complying with its obligations and not violating the regulations of the International Atomic Energy Agency (IAEA), the other parties, P5+1 plus the EU have pledged to uphold their commitments under the agreement and not reimpose sanctions against this country. However, despite frequent verifications by IAEA and its formal reports indicating that Iran has never been non-compliant with the JCPOA, US unilaterally left the agreement without any grounds or explanation.

Informed and independent journalists around the world!

We, Iranian journalists, independent of the government and as an enlightening class that shares the same identity and concerns with other journalists all around the world, in the 21st century when the civilization has come to a common understanding of human dignity in the concept of freedom, are witnessing that the US government, against the approach of the Founding Fathers of the United States of America and the other thinkers of the concepts of democracy and freedom, from Thomas Jefferson to Francis Fukuyama, has been making a threat against other people on the other side of the globe, restricting their freedom.

Whereas leaving JCPOA is a non-diplomatic immoral behavior, imposing tyrannical sanctions against a great nation will certainly be an antagonistic, discreditable measure. The US government claims that its sanctions are targeted on Iranian governance, not on Iranian people, while Iranian government believes that the sanction would come to no harm. However, we as the freethinker freestanding journalists with an attitude independent of any government believe that contrary to what governments claim, the US tyrannical sanctions have brought about destructive repercussions for the lives of millions of Iranian citizens who legitimately enjoy the right of life under optimal conditions. The US government obviously tells a lie when claiming that the sanctions are not imposed on the Iranian people. Indeed, the pressure and economic blockade of Iran have left harmful and in some cases, terrible impact on the life of Iranian people, not least the poor, entirely inconsistent with any reading of human rights.

Difficulty in having access to medicine, drugs and medical equipments is an obvious proof for this statement that it is the people, children, women and men, who are actually targeted by blind sanctions, and so is when the price of goods are skyrocketed far beyond the purchasing power of ordinary people, and when the cost for health, education and even nutrition for the people are disproportionately increased, when many job opportunities are lost as the immediate effects of the sanctions on the industry and agriculture, all these subsequently provoke escalation of poverty among the households, and these households are just those who constitute Iranian people…

We believe that the human knowledge belongs to the entire human beings, not merely to a particular nation. Just as many nations all around the world that have enormously benefitted from thoughts of Iranian scientists and thinkers such as Avicenna, Khwarizmi, Omar Khayyam, Mohammad ibn Zakaria Razi, Saadi and Rumi, the right of benefitting from human sciences and their fruits and output, including technology and industry, are preserved for Iranian people, like any other nation. No state should be allowed to deprive a great civilization-making nation, on delusive grounds, from this right.

Mr. Trump has exceeded far beyond boycotting the Iranians, issuing a threat of punishment against any nation that would make any trade or deal with Iran. This is actually a practical sanction against other countries, foreclosing the right of benefitting from trade and exchange for all nations that is in direct contradiction to the principles of International Human Rights Charter and the nature of freedom of human beings. More disastrously, when the Iranian people refer to International Court of Justice to reclaim for their right, the White House, instead of adopting the verdict, threatens the judges and court officials to sanctions…

American unilateral sanctions against Iran clearly conflict with enactments and resolutions of the UN Security Council. According to the UN Charter verified and adopted by the members at the San Francisco Conference, the authorization of any coercive measure, including sanctions, is accredited to the Security Council in order to avoid unilateralism. On this basis, the article 39 of the UN Charter determines that “The Security Council shall determine the existence of any threat to the peace, breach of the peace, or act of aggression and shall make recommendations, or decide what measures shall be taken in accordance with Articles 41 and 42, to maintain or restore international peace and security.” Thus, unilateral measures taken by any country are contrary to the explicit provisions of this international charter.

Plus, based the “Declaration on Principles of International Law concerning Friendly Relations and Cooperation among States”, the UN Resolution 2625, adopted by the General Assembly in 1970, lays emphasis on the principle of non-intervention, declaring that “No State may use or encourage the use of economic political or any other type of measures to coerce another State”.

Besides, the Resolution A/RES/46/210 adopted by the General Assembly in 1991 calls upon all the states to eliminate unilateral economic coercive measures with the purpose of exerting, directly or indirectly, coercion on the sovereign decisions. The second article of the resolution considers these economic coercive measures, as evidenced by trade restrictions, blockades, embargoes, freezing of assets and other economic sanctions incompatible with the Charter of the United Nations.

Again, the resolution A/RES/51/22 that was adopted under the title of “Eliminations of coercive economic measures as a means of political and economic compulsion” by the General Assembly in 1996, considers the unilateral sanctions in contravention of the norms of international law, stating that the enactment of extraterritorial coercive economic laws is inconsistent with the inalienable right of every state to economic and social development and to choose the political, economic and social system which it deems most appropriate for the welfare of its people, in accordance with its national plans and policies.

For the time being, defying and even disparaging resolutions of the UN General Assembly and the Security Council, adopted by members of the United Nations, by a wayward person as the head of a member state is indeed a black mark in the history of civilized world and the United Nations as well. For the first time, the head of a member state of the UN asks other members to trample upon a Security Council resolution! (United Nations Security Council Resolution 2231 concerning removing sanctions against Iran, adopted on July 20, 2015). Can this eccentric development be considered a terrible sign heralding an endeavor to overthrow the highest institution in the world that works based on collective rationality and democratic values? Is the economic power and authority, by its very nature, sufficiently eligible to foreclose the authenticity of collective rationality, removing it from the processes of decision- and policy-making in the international arena?

We, as independent journalists, call upon all our free-thinking peers all around the globe – not least the free-thinking journalists in the West – not to keep silent against blemishing the principles of human freedom (that are the result of human beings sufferings throughout the history) with the utmost encourage and without being influenced by any government and speak out in defense of the truth, as John Locke who once stressed that “Life, liberty and property are fundamental values and not subject to the will or legislative authority”, and eventually not let the fruits of libertarian thoughts go with the wind so terrifyingly, nor the results of works of thinkers from Thomas Jefferson, John Dewey and Walter Lippmann to Abraham Lincoln, Mahatma Gandhi, Martin Luther King, Nelson Mandela, John Stuart Mill, Friedrich Hayek and Karl Popper and to Isaiah Berlin, Hannah Arendt, Francis Fukuyama and other activists and thinkers of freedom be perished.