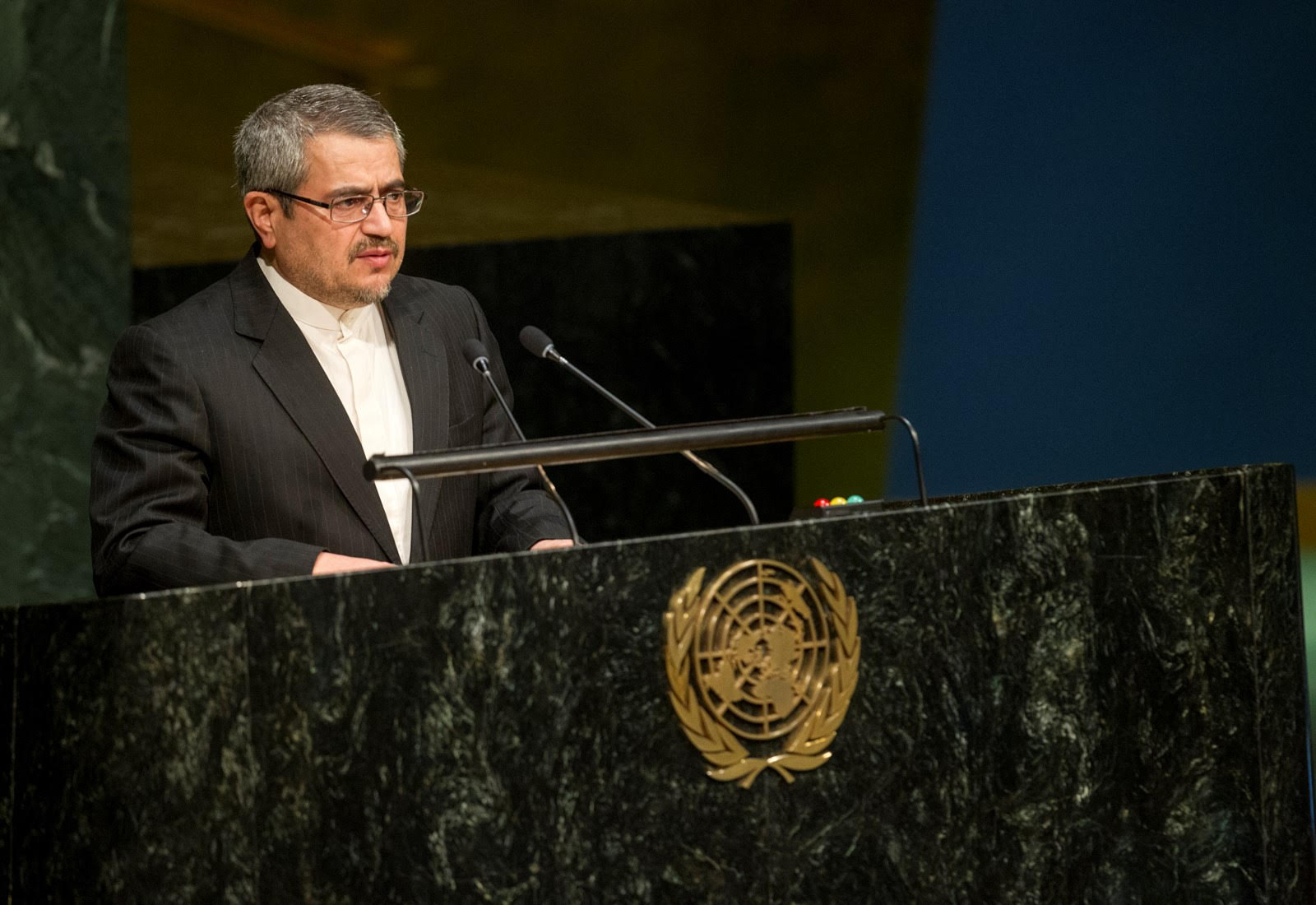 Iraq’s new president calls for expansion of ties with Iran

The newly-elected president to Iraq, Barham Salih, has stressed his country’s resolve to expand relations and cooperation with the Islamic Republic of Iran.

Iranian Parliament Speaker Ali Larijani has set off for Turkey’s Antalya to attend the third meeting of Speakers of Eurasian Countries’ Parliaments.

Tehran wants to overturn a US court’s 2016 decision to hand over millions in frozen Iranian funds to American families of victims of attacks attributed to Iran.

Iranian Parliament Speaker Ali Larijani rebuked the United States’ aggressive policies, saying that the US’ unilateral approaches are the reason behind the current global issues.

In a meeting with Qatari Parliament Speaker on Tue., Ali Larijani said that all people in the world seek to have their own way of living, dismissing as ineffective any kind of hegemonic policies in today’s world.

Iran’s UN envoy has called US withdrawal from the Iran Deal and re-imposition of sanctions against the country a serious threat against the UN Charter urging the international community to take a decisive reaction against Washington’s threats.

Chief of Staff of the Iranian Armed Forces Major General Mohammad Baqeri says the country has made such a big progress in the military drone industry that it is now among top seven powers across the globe.

Iranian Interior minister Abdolreza Rahmani Fazli has travelled to Ankara at the head of a high-ranking political delegation to meet with Turkish officials and discuss security issues.

Iran says Germany’s ambassador to Tehran has been summoned to the foreign ministry over a German court’s verdict on extradition of an Iranian diplomat to Belgium.

The high-ranking delegations of Iran and Turkey held a meeting in Ankara on Thursday, chaired by Iranian Interior Minister Abdolreza Rahmani Fazli and his Turkish counterpart Süleyman Soylu.

An Iranian delegation, consisting of women lawmakers, arrived in the Swiss capital on Saturday to attend the 139th Assembly of the Inter-Parliamentary Union (IPU) on October 14-18.

The 4th edition of Military Medicine Congress in Asia-Pacific Region began in Tehran on Saturday.

Iran’s Islamic Revolution Guards Corps (IRGC) says the Islamic Republic will keep its military advisory presence in Syria as long as Tehran finds it “effective and useful” and as long as the Arab country’s government demands it.

Iranian President Hassan Rouhani participated in a ceremony at Tehran University to mark the start of the academic year.

Leader calls for practical measures to rein in economic woes

Leader of Islamic Revolution Ayatollah Khamenei called for practical and serious measures to solve the country’s major economic issues, including those related to banking system, employment, inflation and liquidity.

ICJ last session on Iran complaint against US wraps up

The Hague-based International Court of Justice (ICJ) on Friday ended hearing the US lawyers’ defense against the lawsuit filed against the country by Iran.

Some senior financial executives from Europe have reportedly met in on the sidelines of the annual meeting of the International Monetary Fund (IMF) and World Bank in Bali, Indonesia, to discuss the effect of US sanctions on doing business with Iran, news sources report.

One of Iran’s top foreign policy officials has called for negotiations with “anti-Trump movements” in the US to dampen the impact of sanctions, local media reported Saturday.

Iranian heavy crude’s price rises by 2.09 dollars in the week ending on October 5 to approach 81 dollars per barrel.

Syrian President Bashar al-Assad says the northwestern province of Idlib will finally return to government control along with other territories, which are still in the hands of foreign-backed militants.

Hariri hopes for speedy Lebanon govt. formation after concessions made

Lebanese Prime Minister-designate Saad Hariri says all political sides have made concessions on their demands for posts in the next Cabinet, expressing hope that a new government would be formed after President Michel Aoun returns from a trip abroad.

Spokesman for the headquarters of Arbaeen said that 1,600 foreign and domestic correspondents and 400 television networks from 43 countries cover the great and spiritual ritual of Arbaeen.

The US Senate approved two bills that clear the way for new sanctions against the Lebanese resistance movement, Hezbollah.

The southwestern Iranian city of Shiraz is hosting the 13th International Conference for the Promotion of Persian Language and Literature.

The Council of Ministers convened on Wednesday and approved allocating 90 billion rials of credit for repairing damages made by the recent floods in Gilan, Mazandaran, Golestan and North Khorasan provinces.

IRGC to set up 10 field hospitals for March of Arbaeen

Iranian athletes gained a total of 51 gold medals winning 3rd place for their country at 2018 Asian Para Games, for the first time in history.

The 11th edition of the Nanotechnology Exhibition, also known as Iran Nano 2018, has kicked off in the Iranian capital of Tehran with the participation of 160 institutions.