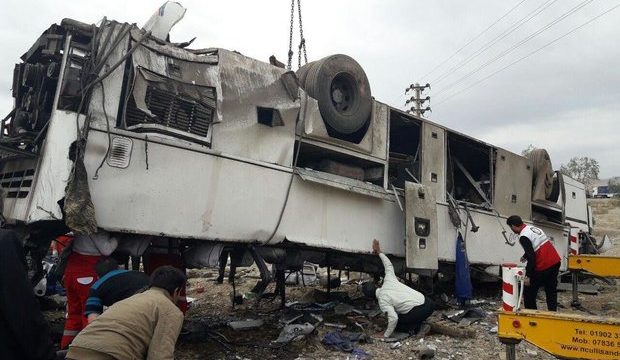 Bus turns over in Fars, kills 5, injures 15 including 2 French

MNA – A bus heading towards southwestern city of Shiraz from the central city of Isfahan turned over in Marvdasht, killing 5 passangers, and injuring 15 others, including two French nationals.

According to the head of the Fars province’s medical emergency center Mohammad Javad Moradian on Saturday, a bus carrying passengers from Isfahan in central Iran to the southwestern city of Shiraz in Fars province turned over in Marvdasht at 05:45.

Moradian said that 5 ambulances were immediately dispatched to the scene in addition to an emergency bus.

According to the head of the Fars province’s medical emergency center, 5 people were killed in the incident while 15 others were injured.

The driver was reported to have fallen asleep at the wheel. In addition, two of the injured are reported to be French nationals, whose injuries are not life-threatening.