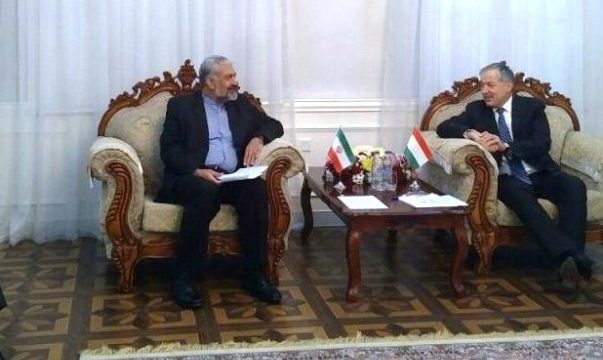 On the sidelines of SCO Summit: Iran, Tajikistan stress on enhancing ties in different sectors

The meeting was held on the sidelines of the 17th Shanghai Cooperation Organization (SCO) Summit, hosted in the Tajik capital of Dushanbe on Oct. 10-11. The two-day event is a political, economic, and security alliance which is held once a year to assess the situation in the region and adopt decisions on all important matters of the organization.

The Tajik FM referred to the constructive visits by Iranian senior officials to his country in the past months and stressed on enhancing relations in different sectors.

Reminding that the two countries enjoy a good history of relations, Iran’s deputy minister said the Islamic Republic has always supported the development of regional countries including Tajikistan.

The official touched upon the significant role of neighboring countries in Iran’s foreign policies, and stressed on the need to promote all-out ties between Iran and Tajikistan in all fields, especially in the economic sector through the “joint economic commission”.

Osmanzadeh, for his part, lauded the Iranian companies active in Tajikistan, including those involved in building a power plant, and voiced hope for development of cooperation especially in the energy sector.