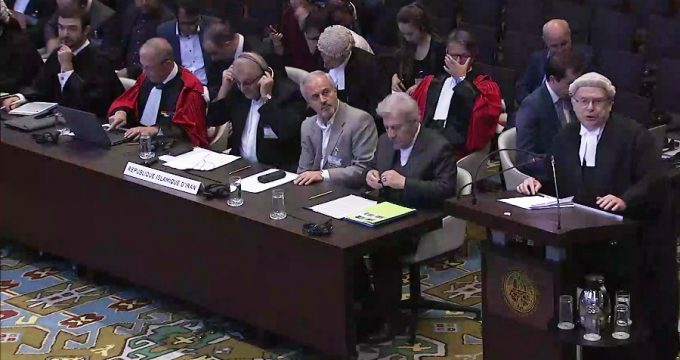 ICJ last session on Iran complaint against US wraps up

IRNA – The Hague-based International Court of Justice (ICJ) on Friday ended hearing the US lawyers’ defense against the lawsuit filed against the country by Iran.

The ICJ heard the US lawyers’ defense against the lawsuit filed against Washington over violation of the Treaty of Amity through unlawful seizure of $2 billion worth of the Central Bank of Iran’s (CBI) assets.

The ICJ said that it will inform both Iran and the US about the time of release of its verdict.

In the meantime, the Iranian delegation, attending the last session of the ICJ, rejected the US envoys’ claims and accusations, citing documents thereof.

The Iranian delegation described the US envoy’s claims as baseless and urged the ICJ to turn them down.

The Iranian team said the US courts have issued a decree against Iran’s CBI to freeze about two billion dollars of its assets, thus causing problem for the bank in its international relations.

The US sanctions against the CBI is against the treaty of amity between the two countries, the Iranian lawyers noted.

At the end of the meeting, Mohseni Mohebi, head of the Iranian delegation, referred to the US accusation against Iran on sponsoring terrorism and noted that Washington made such accusations at the time when Iran’s parliament approved a bill on Combating the Financing of Terrorism (CFT).

Earlier on Wednesday session, Iranian lawyers participating in the high court established to deal with the complaints of the governments against each other listed the US’ violations of the treaty of amity of 1955.

Probing the US violation of the treaty of amity through resuming sanctions against Iran is an example of a legal settlement of disputes between the two sides, which resulted in a court ruling in favor of Iran, the Iranian team said.

International Court of Justice (ICJ), Iran lawsuit against US sanctions, US sanctions against Iran October 12, 2018
Iran’s oil exports to South Korea not to be cut to zero: Official
Trump using Iranophobia to sell American munitions to Arab states: Nasrallah