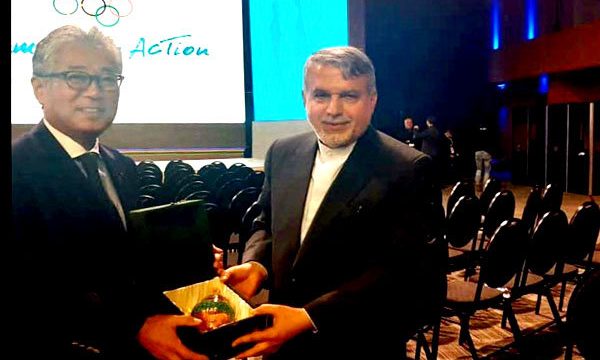 The meeting took place on the sidelines of the third edition of the Summer Youth Olympic Games (YOG), which is underway in Buenos Aires, Argentina on October 6-18.

During the meeting, Reza Salehi Amiri hailed Japan’s achievements in various sports fields, saying that the next Olympics which is going to be held in Japan will be a successful event.

Salehi Amiri further expressed his appreciation to Takeda for the successful hosting of the 2018 FISU World University Karate Championship in Japanese city of Kobe, calling for holding joint camping programs between Iranian and Japanese sports teams.

Also in the meeting, they agreed to increase cooperation between the two countries’ national Olympic committees and sign a memorandum of understanding in the next summit, which is going to be held in Tokyo in November.

Tsunekazu Takeda, for his part, presented a report on the actions taken by Japan to successfully hold the Olympics in 2020, and invited his Iranian counterpart to pay a visit to sports facilities in Japan.

In turn, Salehi Amir invited Takeda to visit Tehran and the sports facilities in Iran.