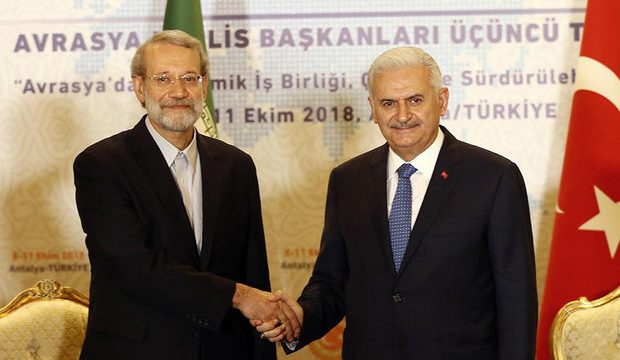 US is upset over Iran-Turkey’s friendly ties: Larijani

MNA – Iranian Parliament Speaker Ali Larijani said in a meeting with his Turkish counterpart Binali Yildirim that the US and some regional countries are upset at seeing the friendly and strategic ties between Tehran and Ankara.

“Following the successful measures taken by Iran, Russia and Turkey in settling the Syrian issue, their [US and regional states] concerns only continued to grow, but Iran and Turkey, with their strong historical roots, will not be shaken in the face of such threats,” said Iranian Parliament Speaker Ali Larijani in a meeting with Turkish Grand National Assembly Speaker, Binali Yildirim, on Tuesday.

The talks were held on the sidelines of the 3rd meeting of Speakers of Eurasian Countries’ Parliaments currently underway in Antalya, with parliamentary heads and delegations from 38 countries, including Iran, in attendance.

The Turkish official, for his part, stressed that Iran and Turkey have always stood by each other’s side, adding that the Iran-Turkey-Russia initiative for putting an end to the Syrian civil war has upset some countries to the point where they have started to play other games against these three countries, implying the sanctions regime.

He said Iran, Turkey and Russia could expand their regional cooperation in Syria by overcoming all oppositions in order to add newer dimensions to security, defense and military issues.

Yildirim then voiced regret over the US unilateral withdrawal from the Iran nuclear deal, stressing that Iran and Turkey could not just stand aside and watch as the US’ unpredictable measures continued to alter the course of regional developments.