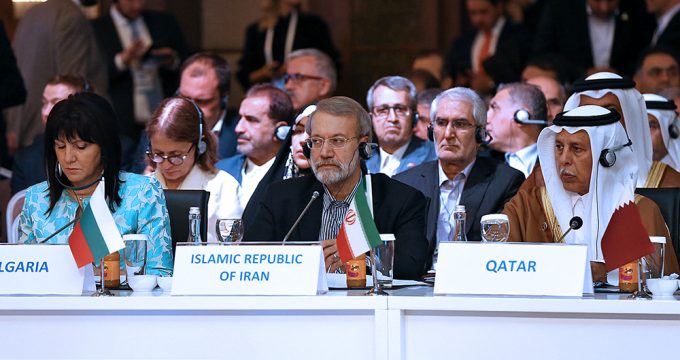 MNA – Iranian Parliament Speaker Ali Larijani rebuked the United States’ aggressive policies, saying that the US’ unilateral approaches are the reason behind the current global issues.

Addressing the third meeting of Speakers of Eurasian Countries’ Parliaments in Turkey’s Antalya on Tuesday, Larijani called for other countries’ cooperation to deal with aggressive policies of the US.

Stressing that the US and the Israeli regime have undermined the global security, the official condemned US President Donald Trump’s unlawful decisions, including the recognition of Palestine’s Jerusalem al-Quds as Israel’s capital.

He also referred to the US’ withdrawal from the Paris Climate Agreement and adding fuel to the economic war and tariff tensions as other aggressive measures taken by Trump.

Larijani also touched upon the US’ unilateral withdrawal from the Iran’s landmark nuclear deal and warned about the reappearance of unilateralism in the international arena.

The official asked the participants in the meeting for a closer cooperation, and adoption of practival policies to boost multilateral decisions, as well as redefining and developing their relations in the political, security, economic and business aspects.

Speakers of 20 countries’ parliaments and delegations from 17 Asian and European countries are taking part in the meeting, comprising around 700 officials convened in the Turkish resort city to discuss cooperation on economic and environmental issues, and sustainable development.

The meeting is organized under the theme “Economic Cooperation, Environment and Sustainable Development in Eurasia”, and aims to evaluate the obstacles facing sustainable development at a global and regional level, and to increase international cooperation to remove them.