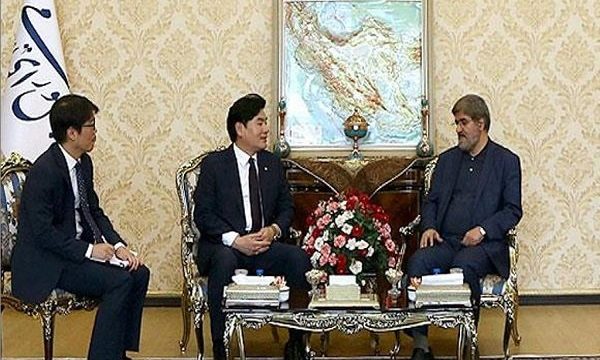 MNA – Deputy speaker of Iran’s Parliament Ali Motahari has called on South Korea to pursue an independent policy from that of the United States and enhance bilateral relations with Iran.

Tehran’s representative, who is the deputy speaker of Iranian Parliament, made the remarks in a meeting with Won Yoo-chul, MP and chairman of the Conference on Environment and Sustainable Development of the Asia Pacific Parliaments in Tehran on Saturday.

During the meeting, Motahari condemned the US withdrawal from Iran nuclear deal as an illegal action, adding that US’ wrong policies can damage the long-standing political and economic relations between Iran and South Korea.

He stressed that the adoption of an independent policy by South Korea would lead to an increase in the level of bilateral relations between the two countries.

Tehran’s representative also attached great importance to the role of dialogue in dealing with regional and international issues between the two countries, saying that the next Conference on Environment and Sustainable Development, which is planned to be held in Tehran, “can continue cooperation among countries and provide solutions to global issues such as the environmental and other international challenges.”

Motahari further emphasized the necessity of the implementation of the existing agreements between Iran and South Korea, saying that their implementation and removal of banking barriers could lead to the development of economic, commercial and industrial relations between the two countries’ public and private economic sectors.

The South Korean MP, for his part, expressed happiness with the increasing bilateral relations, saying that the cooperation between the two countries’ parliaments can help develop political and economic ties.