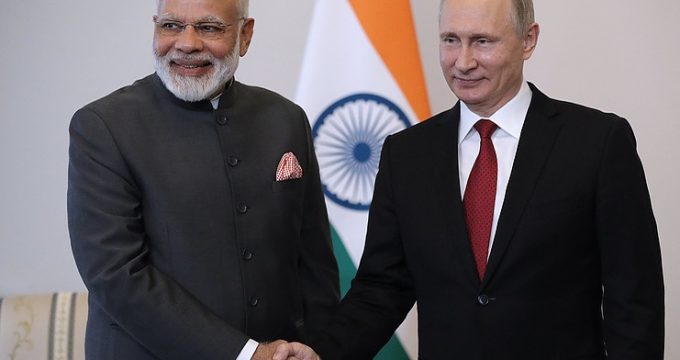 TASS – Russian President Vladimir Putin has discussed the impact of the US withdrawal from the Joint Comprehensive Plan of Action (JCPOA) for Iran’s nuclear program with Indian Prime Minister Narendra Modi, as he himself told reporters.

“While discussing international affairs, Russia and India confirmed that their positions on key global issues were either converging or similar. Accordingly, a decision was made to boost cooperation on multilateral platforms, including the United Nations, BRICS, the SCO [Shanghai Cooperation Organization] and the G20,” Putin said.

The Russian president pointed out that Moscow and New Delhi “will work closely together to boost security and cooperation in Asia and fight modern threats and challenges such as international terrorism, drug trafficking and cross-border crime.” “In this regard, we touched upon issues related to the reconstruction of Afghanistan’s economy and ensure its stable political development, and also exchanged views on the situation in the Middle East,” Putin added.

He noted that he had informed the Indian prime minister “about the situation in Syria.”

“We discussed the situation stemming from the United States’ unilateral move to withdraw from the Joint Comprehensive Plan of Action for Iran’s nuclear program,” the Russian leader said.

On May 8, US President Donald Trump announced Washington’s withdrawal from the Iran nuclear deal. He said that old sanctions on Iran would be restored and new ones would be introduced in case Tehran attempted to pursue its nuclear ambitions. The first batch of new US sanctions on Iran took effect on August 7.

In the wake of Trump’s decision, the leaders of Great Britain, Germany and France called on other participants in the deal to continue fulfilling it. Iranian President Hassan Rouhani said that Tehran would not abandon the JCPOA and would continue to comply with its obligations. Russian Foreign Minister Sergey Lavrov said that Washington’s withdrawal from the JCPOA would violate the United Nations Security Council’s resolution. He added that Russia would seek to maintain the agreement despite US plans to resume sanctions against Iran.