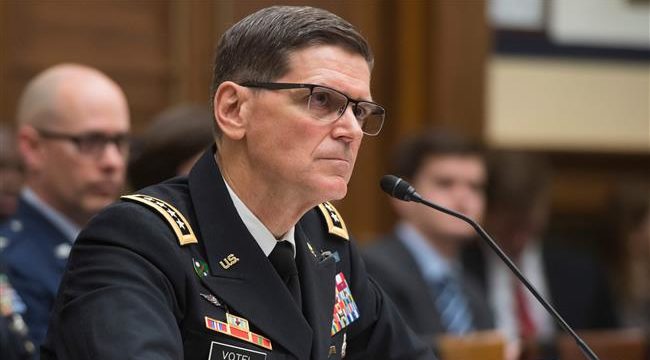 US not on the road to war with Iran: General Joseph Votel

Press TV – The general overseeing the US military’s involvement in the Middle East has said the United States is not “on the road to war with Iran,” despite the fact that some Trump administration officials have stepped up rhetoric against Tehran.

“I don’t think we’re seeking to go to war with Iran, and I don’t think that’s what we’re focused on,” General Joseph Votel, who heads the US Central Command, told Pentagon reporters on Thursday.

Trump has been clear Tehran needs to “cease its destabilizing behavior and policy that spreads violence and human misery throughout the Middle East,” Votel said.

“The principle way that we are approaching that right now is through diplomatic and economic pressure. And I support that, I don’t see that necessarily as being on the road to war with Iran,” he added.

A warning by retired US General Wesley Clark that Iran has been a target of US intentions issued more than a decade ago appeared last month to be moving closer to realization.

Trump, in the anti-Iran remarks made at the UN General Assembly’s General Debate and amplified as he chaired a meeting of the Security Council, seemed to confirm the claim made by the former chair of the Joint Chief’ of Staff under President Bill Clinton that Iran was on a list of seven countries that Washington planned to invade and destroy.

The retired 4-star US Army general, Supreme Allied Commander of NATO during the 1999 War on Yugoslavia, said in the 2007 interview that the purpose of the 9/11 attack was to take out the governments of seven countries in five years. These seven countries were Iraq, Syria, Somalia, Libya, Sudan, Yemen, and Iran. All of these countries have been directly or indirectly been the object of US aggression.

Last month, several gunmen launched a deadly terrorist attack on a military parade in the Iranian city of Ahvaz, bordering Iraq where the US has still thousands of troops deployed. Some independent observers have said that the well-coordinated attack was an indication that the United States has decided to accelerate asymmetric warfare against Iran, following Trump’s launching of an economic war against the Islamic Republic.

US to end Treaty of Amity with Iran

On Wednesday, Secretary of State Mike Pompeo said the United States was withdrawing from a decades-old friendship treaty with Iran that allowed Tehran to pursue legal action against Washington overseas.

In July, Iran filed a complaint with the Hague-based International Court of Justice (ICJ), also known as the World Court, asking the principal judicial organ of the United Nations to order the US to lift its recently re-imposed sanctions on the Islamic Republic.

Iran believes that the re-imposed American sanctions against Iran violate the terms of the 1955 Treaty of Amity between the two countries.

On Wednesday, the ICJ ordered the US to ease some sanctions against Iran. The court ruled that Washington had to remove “any impediments” to the export of humanitarian goods, including food, medicine and aviation safety equipment.

But shortly after the ICJ ruling, Pompeo said the treaty would be terminated.

And, US National Security Adviser John Bolton said all agreements which could expose the United States to World Court rulings would be also reviewed.

The US re-imposition of sanctions against Iran came after President Donald Trump pulled out of the 2015 nuclear deal known as the Joint Comprehensive Plan of Action (JCPOA) and set forth 12 new demands in order for the US to agree to a new nuclear deal with Tehran.

Bolton: US to stay in Syria as long as Iran is there

Last week, President Trump’s national security adviser John Bolton, a longtime hawk on Iran, said the US would maintain a presence in Syria as long as Iran is there.

“We’re not going to leave (Syria) as long as Iranian troops are outside Iranian borders,” Bolton said.