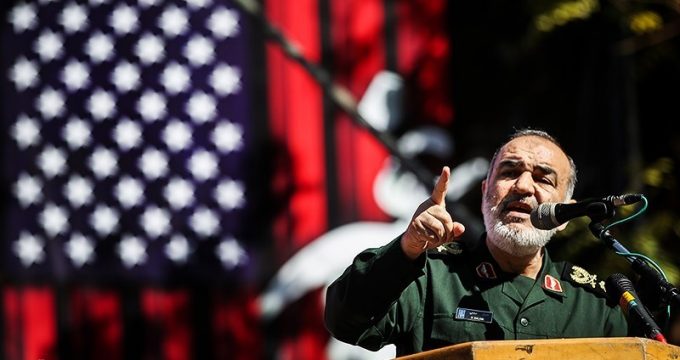 IRGC general advises Bibi to learn to swim in Mediterranean

Tasnim – Deputy chief of the Islamic Revolution Guards Corps (IRGC) warned the “fabricated” Zionist regime of an impending collapse, recommending the Israeli prime minster to learn how to swim in the Mediterranean before being dumped into the sea.

Addressing a huge gathering of IRGC and Basij forces in Iran’s central city of Isfahan on Friday, IRGC Lieutenant Commander Brigadier General Hossein Salami slammed the Zionist regime as a “political mannequin” in the US shop window, stressing that Israel lacks any element of a state or government.

Israel is too small to be threatened by the IRGC, the general said, adding that Lebanese Hezbollah’s power is enough to terminate the Zionist regime’s political life.

“We recommend its (Israel’s) itinerant prime minister to learn and practice swimming in the Mediterranean” instead of deceiving the world when it comes to Iran’s progress, General Salami said, adding that the Zionist regime’s officials cannot avoid being thrown into the sea.

Highlighting the Islamic Republic’s regional clout and establishment of fronts against the enemies from east of the Mediterranean to North Africa, the general said Iran’s influence differs from that of the US.

“We do not have military bases anywhere, and our presence in Syria is limited, which represents our values,” he underlined.

On October 1, the IRGC Aerospace Force fired six mid-range ballistic missiles at the bases of Takfiri terrorists in an area east of the Euphrates in Syria in retaliation for the Ahvaz terrorist attack.

Following the missile strike, the IRGC flew seven combat drones and bombed the positions and strongholds used for accommodating and supporting the terrorists.

During a military parade in Ahvaz on September 22, Takfiri militants launched an attack, killing 25 people and injuring more than 60 others, including women and children.

Following the terrorist act, Leader of the Islamic Revolution Ayatollah Seyed Ali Khamenei said the attack in Ahvaz was the continuation of plots hatched by US stooges in the region to create insecurity in the country, adding that Iran’s intelligence services must swiftly find the accomplices of the “criminals” behind the attack and put them on trial.